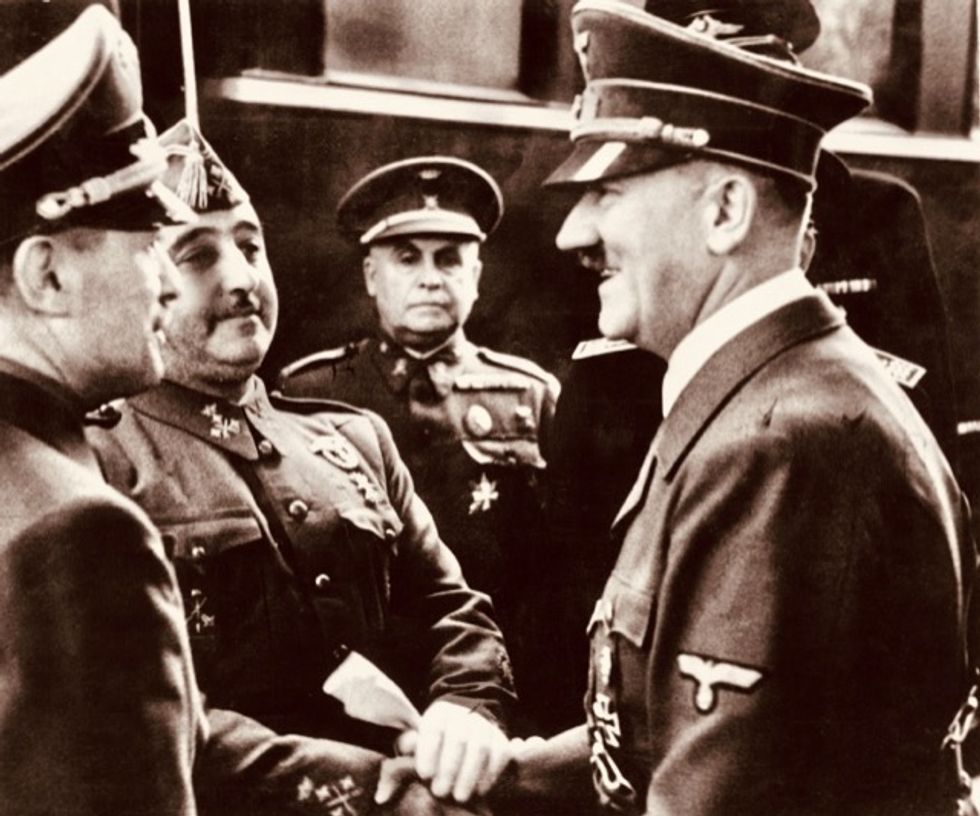 Eighty years ago on the brink of the bloodiest conflict in history, Adolf Hitler was nominated for the Nobel Peace Prize, illustrating that literally anyone can be nominated.

From the Fuhrer to the "King of Pop", in the nearly 120 years the prize has been awarded nominations have included some choices that -- to say the least -- have seemed unlikely and outright bizarre.

In January 1939, about eight months before the invasion of Poland, Swedish Social Democratic MP Erik Brandt wrote to the Norwegian Nobel Committee to suggest the Peace Prize should be given to Hitler.

In the letter, written only months after the annexation of Austria and the Sudeten Crisis, Brandt praised the leader of the Third Reich's "glowing love for peace", dubbing him "the Prince of Peace on Earth".

Brandt later explained the nomination was meant to be satirical -- although the irony was lost on many -- and was in protest against British prime minister Neville Chamberlain being nominated for the 1938 Munich Agreement in which part of Czechoslovakia was ceded to Germany.

The logic was that if Chamberlain were to be celebrated for appeasing Hitler, the Fuhrer might as well be too.

Brandt eventually withdrew the nomination, but Hitler still appears as a candidate in the archives.

"The history of Erik Brandt's nomination of Adolf Hitler fully shows how dangerous it may be to use irony in a heated political setting," Nobel historian Asle Sveen told AFP.

- Stalin and Mussolini too? -

The Nobel Committee accepts all proposals as long as they are sent before the January 31 deadline.

But while anyone alive can be nominated, not just anyone can submit a nomination.

AFP / TIMOTHY A. CLARY Michael Jackson was nominated for the peace prize in 1998

Those eligible to do so include parliamentarians and ministers from all countries, former laureates, some university professors and current and former members of the Committee itself. All together they number in the thousands.

"There are so many people who have the right to nominate a candidate that it's not very complicated to be nominated," the influential Committee secretary, Olav Njolstad, told AFP.

In 1935, Italian dictator Benito Mussolini was proposed, ironically, by German and French academics mere months before his country invaded Ethiopia.

As one of the victors of World War II, Russian leader Joseph Stalin was nominated twice, in 1945 and 1948.

Once the deadline has passed and the nominations are in, only a handful are kept on a shortlist to be reviewed by the Committee and its advisors.

"Neither Hitler, Stalin nor Mussolini were seriously considered for the Peace Prize," historian Geir Lundestad, former secretary of the Committee, told AFP.

"What surprises me most is that many dictators around the world have refrained from getting themselves nominated."

Over the last two decades the number of candidates has skyrocketed and today generally exceed 300, so it isn't too surprising that a few odd names show up.

"One or two" nominations distinguished by their peculiarity show up "at regular intervals", according to Njolstad.

The list of candidates is kept confidential for at least 50 years, but a sponsor can publicly announce their pick.

Whether a nomination is odd or not is of course a matter of perspective, but some proposals would certainly make most people do a double-take.

In 2001 the sport of football represented by the international football federation FIFA was nominated.

The Swedish lawmaker behind the nomination argued that sports had the "ability to create positive international contacts" and contribute to a "more peaceful world".

This wasn't even that novel of an idea, since Jules Rimet, who initiated the first World Cup, had also been nominated in 1956, noted journalist Antoine Jacob, author of "History of the Nobel Prize".

Pop icon Michael Jackson found himself in the running in 1998.

Even though many of the child sex abuse allegations against the "King of Pop" had not surfaced at the time, the artist's message to "Heal the World" did not impress the Committee.

"The Romanian parliamentarians who proposed Michael Jackson considered this nomination to be very serious, but it was not considered by the Committee either," said Lundestad.

But in 2001 Lundestad also said it didn't seem impossible that famous musicians involved in causes, such as Bob Geldof, Bono or Sting could one day receive the award.

"Artists' names come in regularly, but it's a more recent trend," explained Njolstad.

Among this year's known nominations for the Nobel Peace Prize, which will be awarded on October 11, are US President Donald Trump and Swedish climate activist Greta Thunberg.

However Lundestad insists that one shouldn't get too excited over just a nomination.

"It's pretty easy to be nominated," he said. "It's much harder to win".