House Republicans appear worried that Mitch McConnell will betray them 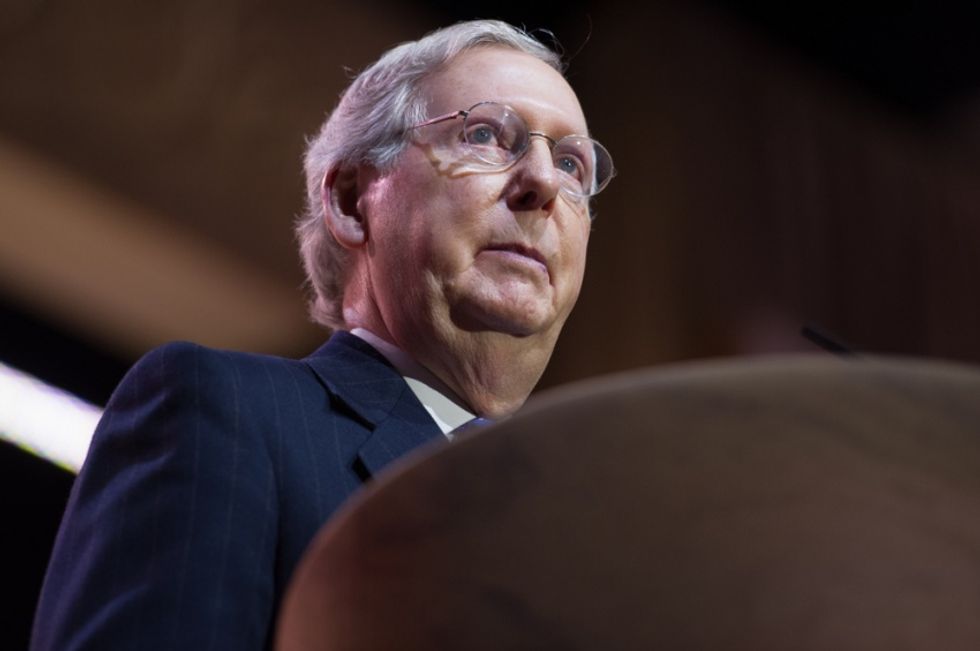 When it comes to lying to the American people, the Republicans in the House are turning out to be marathon runners. They never get tired. They just keep going.

After Nancy Pelosi said the chamber would vote on an impeachment resolution, a measure that all Republicans have demanded, Steve Scalise, the GOP’s No. 2, told reporters on Wednesday that that would not suffice: “In a court of law, this would be declared a mistrial. This impeachment charade has been a tainted process from the start. Schiff has spent weeks blocking due process & leaking misleading info to the liberal media to fit his phony narrative. Their resolution codifies this sham.”

Well, there is an order to things. First an investigation. Then an indictment if the evidence is strong enough. Then a Senate trial. This isn’t a “court of law,” but there is a method and a procedure to follow. Furthermore, the Democrats have not blocked due process. They have been following rules that a Republican majority codified in 2015. Even when the Democrats provide what the Republicans say they want—a resolution to authorize formal impeachment proceedings—they change their minds. The Republicans, moreover, sit on all the committees investigating the president for impeachable offenses. They could do their own leaking if that helped Donald Trump.

It doesn’t help, though, and there’s a reason for that. The evidence is damning. That alone explains why the House Republicans have blasted the process. They have been exploiting the fact that some Americans are not yet informed about how impeachment is supposed to work according to the US Constitution. They have been telling the tallest of tales about secret “Soviet-style, Stalinist” proceedings behind ominous closed-doors to cancel the 2016 election. They can’t defend Trump on the merits. They can’t explain why officials in his own administration keep defying his direct order not to cooperate with House investigators. Why are the Republicans lying so much?

They’re desperate. But desperate about what?

It’s not just the president they are worried about. GOP leadership, I think, is worried about other Republicans in the House but especially in the Senate. Even if only a few Republicans vote with most or all of the House Democrats, that will be enough to say the House is sending a bipartisan indictment (which is what impeachment is) to the Senate, and a bipartisan indictment would put tremendous, perhaps overwhelming, pressure on the Republicans in that chamber. Even if Scalise has to lie like he’s being chased by dogs, he’s going to do it. For his own sake, and for the sake of his party.

Scalise’s counterpart in the Senate is Lindsey Graham. He convinced all but three GOP senators to back a resolution condemning the House impeachment inquiry on grounds that it … well, it doesn’t matter. The basis for that resolution is also a bushel of lies. The resolution’s chief complaint is that the House hasn’t voted to start formal impeachment inquiry, which, again, is something Pelosi is answering with a imminent vote. The point of the exercise, though, isn’t about the substance of the evidence mounting against Trump. It’s about shoring up his support among Republicans.

That Graham’s resolution hinges on something as easily remedied as a House vote for moving forward should tell is something about how Senate Republicans are feeling: panicked. And that should tell us something about the conventional wisdom that brushes off any hope that the Senate Republicans will ever turn on a Republican president. This conventional wisdom by the way isn’t only among the Chuck Todds of the world. It’s among diehard liberal partisans who’ve grown so cynical about the possibility of justice in American politics that they strive to justify their cynicism by arguing against even bothering to impeach Trump, because without the remote chance of removing him, all of this is Sturm und Drang. It’s symbolism, and nothing more.

I’d say the Republicans’ behavior of late is about more than symbolism. Indeed, if I were among the House Republican leaders, I’d be very concerned about the possibility of Mitch McConnell, the Senate majority leader, betraying my conference. Most, though not all, of the House Republicans are all-in for Trump. If McConnell decides his majority’s fate and the president’s fate have diverged, he’ll turn on him, and the minute he does, the House Republicans will be left to twist in the wind. In this sense, it’s entirely reasonable for Scalise & Co. to lie nonstop. The more they lie, and the more they can get right-wing media to lie for them, the more they’ll have a chance.