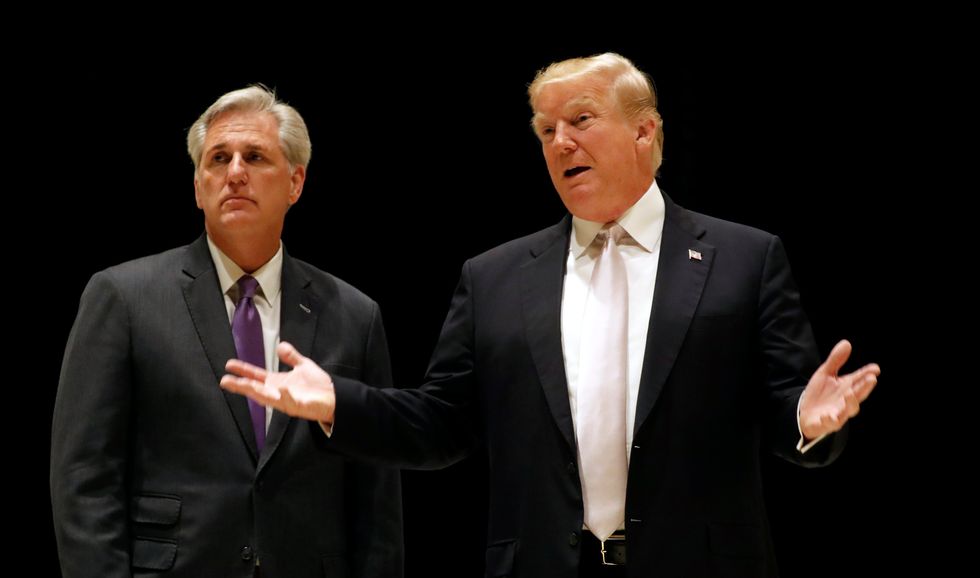 In a Washington Post analysis, reporter Amber Phillips explained that President Donald Trump's letter to Congress saying that he is refusing to cooperate with impeachment inquiries could simply add to his legal problems.

In a conversation with MSNBC Tuesday, Rep. Gregory Meeks (D-NY) said that it's clear Trump is obstructing justice with this action and the next move for the House is to fast-track that charge of impeachment.

The comment is in reference to diplomat Gordon Sondland refusing to appear before Congress after Trump's advisers told him not to.

Obstruction charges are stacking up for Trump. Secretary of State Mike Pompeo spent a week blocking State Department officials from testifying about the Ukraine scandal.

"By the Constitution’s standards, impeaching a president for not participating on an impeachment inquiry is A-okay. Congress gets to decide what 'high crimes and misdemeanors' in the impeachment clause are," The Post analysis said. "If it decides blocking Congress from its oversight duties meets that requirement, then so be it. A similar article of impeachment was written up against President Richard M. Nixon and voted out of the House Judiciary Committee. In that article, the Judiciary Committee cited four times that the Nixon administration 'willfully disobeyed' subpoenas:"

In his conduct of the office of President of the United States, Richard M. Nixon, contrary to his oath faithfully to execute the office of President of the United States and, to the best of his ability, preserve, protect, and defend the Constitution of the United States, and in violation of his constitutional duty to take care that the laws be faithfully executed, has failed without lawful cause or excuse to produce papers and things as directed by duly authorized subpoenas issued by the Committee on the Judiciary of the House of Representatives on April 11, 1974, May 15, 1974, May 30, 1974, and June 24, 1974, and willfully disobeyed such subpoenas

Blocking the investigation into the president by the House is an easy case of obstruction that Congress can make outside of the inquiry into the Ukraine scandal.

Even then Rep. Lindsey Graham (R-SC) said from the House floor in 1998 that Nixon removed the oversight powers of Congress when he refused to cooperate with the Watergate probe.

"The day Richard Nixon failed to answer that subpoena is the day that he was subject to impeachment," said Graham. "Because he took the power from Congress over the impeachment process away from Congress and he became the judge and jury."

Support for the impeachment inquiry already enjoys 58 percent support, according to the latest polls, but Americans want the investigation. On the poll questions, removal from office is a different step Americans say they're not ready for without the evidence. It's presumably why Trump is blocking the investigation.

"On Capitol Hill, there are early signs that pursuing an obstruction charge would be received the same way as impeachment for other stuff, like abuse of power. Rep. Susan Wild (D-PA) is a newly elected member of Congress who flipped a district Trump won. She, along with other Democratic moderates, reluctantly supported an impeachment inquiry when the Trump administration wouldn’t hand over the whistleblower complaint that started all this. It was the act of not cooperating that convinced her an inquiry was necessary."

While she was back in Allentown, Wild then said that withholding documents is an obstruction of the impeachment probe and impeachable.

“If the administration stonewalls us and refuses to produce things, I would consider that to be an obstruction of justice, and, yes, I believe that would constitute additional grounds” for impeachment, she said.

While Republicans are unified in their opposition to impeachment, the idea that Trump is obstructing Congressional authority might get them on board. If there's one thing politicians hate it's losing their power. Trump doing so sets an alarming precedent that not even Republicans want because if a Democratic president did it, the GOP won't have a leg to stand on.

“Quite frankly, if you don’t believe in the processes of your own institution, what are you doing there?” Rep. Mark Amodei (R-NV) told The New York Times in an interview.

"Now, they may have to shift to a broader, somewhat more esoteric focus: Congress’s role as a separate and coequal branch of government. But it can be done," The Post analysis closed.