'If we don't fight... who will?': In name of students, Chicago teachers union sets Oct. 17 strike date 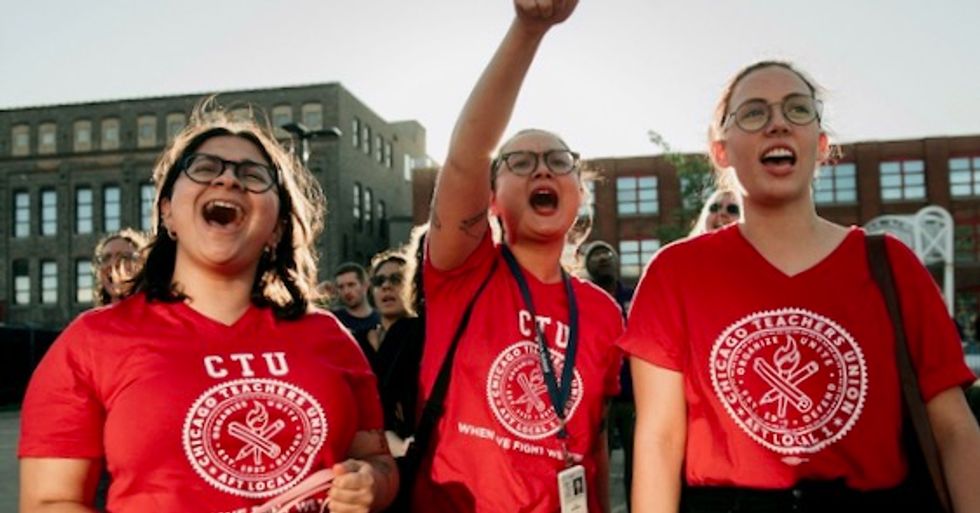 CTU could be joined on the picket lines by SEIU members who work as school support staff and for the city's park district—which would mean 35,000 striking workers all at once

Unionized teachers, school support staff, and park district employees in Chicago announced Wednesday night that all three labor groups—collectively totaling about 35,000 workers—will strike on Oct. 17 if no contract agreements are reached before then.

"Imagine these three different groups of workers all being on strike together in the city of Chicago. That has the potential of being an extraordinarily disruptive moment."

The decision came after 94 percent of CTU's 25,000 members, which includes teachers, clinicians, nurses, librarians, paraprofessionals, and school-related personnel, voted last week to authorize a strike, soaring past the 75 percent threshold.

CTU outlined in a statement the working conditions that led to the votes last week and Wednesday, when union delegates unanimously supported striking on Oct. 17:

Elementary schools with classrooms of over 40 children. Teaching assistants who make poverty wages. Desperate shortages of counselors, social workers and school nurses for students struggling with trauma and poverty. Too few teachers for English language learners, in a school district that is nearly half Latinx. Special education students who continue to go without federally mandated educational services and supports. Nine out of ten majority-Black schools with no teacher librarian. And virtually no progress at the bargaining table—after more than nine months of negotiations for a new contract.

Laurie Torres, an elementary school teacher whose own children attend Chicago Public Schools (CPS), said she voted "yes" on Wednesday "for my three children and for all of our schoolchildren."

"If my kids need to see a counselor, they have to wait—because their counselor is covering a classroom instead of counseling. If my child gets hurt on the playground and the school clerk can't help, he goes without medical care," she continued. "As an elementary school teacher, I know that we all need our prep time—because we already don't get enough to grade our papers, call our parents, plan our lessons, or meet CPS' paperwork requirements.

"There's so much more that our students need—and so much that is lacking," Torres added. "If we don't advocate for it, if we don't fight for it, who will?"

"CTU rank and file members are especially outraged that Chicago Mayor Lori Lightfoot, who campaigned for her office on an education equity platform that closely mirrors the CTU's, has refused to enshrine those promises for educational justice in writing," the teachers union said in a statement.

When Lightfoot was elected to her first term as mayor in a runoff election in April, CTU and SEIU Local 73 expressed hope that she would "[separate] herself from the dubious interests that funded her campaign, and governs like the progressive she claims to be."

Lightfoot and CPS CEO Janice Jackson said in a joint statement Wednesday that "while we are doing everything in our power to reach a fair deal that prevents a strike, we are fully prepared for a work stoppage." If teachers do strike, they added, "all CPS school buildings will remain open during their normal school hours to ensure students have a safe and welcoming place to spend the day and warm meals to eat."

"The mayor has a difficult choice right now," CTU president Jesse Sharkey told reporters Wednesday night, according to the Chicago Sun-Times. "The mayor can either do what's right at the table, or can face a unified strike of both CTU and SEIU together."

SEIU Local 73 president Dian Palmer said the support staff and park district workers are "united with CTU, and we are united with workers who are standing up for themselves."

Higher wages, especially for the lowest-paid, part-time employees, have been the biggest issue on the table for SEIU 73 workers.

With previous teachers strikes, some students and parents have turned to the park district to occupy children with activities during school hours, the Chicago Tribune noted in a Wednesday morning report. But if the city's parks shut down because those workers are on the picket lines too, that won't be possible this time.

"Imagine these three different groups of workers all being on strike together in the city of Chicago. That has the potential of being an extraordinarily disruptive moment," Daniel Gilbert, an associate professor at the University of Illinois' School of Labor and Employment Relations, told the Tribune. "Anytime there's a strike, the more disruptive and widespread that strike is, the more powerful it can be in terms of having an immediate impact on the employer but also in terms of the public narrative."

The joint union effort could represent "a turbo-boost to each union’s bargaining power," said Michael LeRoy, another professor at the university's School of Labor and Employment Relations and College of Law. "This timing also sets up mutual aid strategies for the unions... They can attend each other's rallies, carry banners and signs—in short, they can augment their strength by showing up in greater numbers."

U.S. Rep. Elissa Slotkin, Democrat of Michigan, blasted congressional Republicans on the floor of the House of Representatives Wednesday, accusing them of turning a basic, bipartisan bill to help the nation's veterans into "a cold heartless, violent" referendum on the right to abortion.

“In terms of making decisions on behalf of women, if you want to take a veterans' bill and make it about abortion, then let’s do it,” Slotkin dared her Republican colleagues. “What you are saying – and you’re saying in front of the American people – is that you believe a veteran who has been raped, who was the victim of incest, or who is having a dangerous miscarriage, does not deserve access to abortion.”

A Stanford University climate scientist on Wednesday called for war crimes charges against whoever is found to have ordered the apparent sabotage of the Nord Stream pipeline system, an incident that experts say could result in the largest-ever recorded release of methane emissions.

"Whoever ordered this should be prosecuted for war crimes and go to jail," Stanford's Rob Jackson told the Associated Press as scientists assessed the potentially massive environmental impact of the pipeline damage, which European countries and NATO have formally concluded is the result of a deliberate attack.

Republicans who control the state House on Wednesday shut down an attempt from Democrats to tie-bar every bill being considered to a measure that would repeal Michigan’s 1931 abortion ban, declaring the effort “dilatory.”


The gag rule used by the GOP majority is a rarely used mechanism that has not been seen in the House for decades, according to Democratic House spokesperson Joe Clark. A motion is considered as such if it seeks to obstruct or thwart the will of the assembly; the Republican-led House declared the move from Democrats to be a delay tactic.