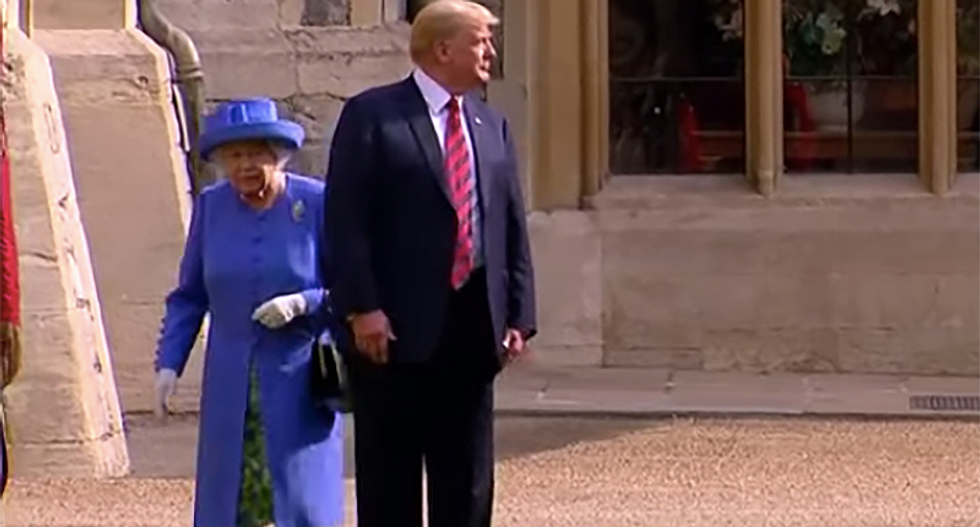 On a British radio program Thursday, President Donald Trump gushed about the time he spent with the Queen of England while visiting the U.K. with his adult children.

"I never even heard it until I went over to visit with The Queen, who, by the way, is a great, great woman, and I think we hit it off really well," Trump said after bashing Labour Party leader Jeremy Corbyn. "We had a terrific time, but she's a great woman. I say that very seldom. I don't say that often, I have to say, about anybody. But she is really very outstanding. And Prince Charles, he loves the environment, he loves your country so much, we had a great time together."

LBC host and right-wing personality Nigel Farage said that Boris Johnson dragged The Queen into Brexit issues, implying that he shouldn't have done that. Trump replied that it isn't like she has any other political issues she's facing.

"Well, one thing I learned about her, because I've watched her, people study her, in as many years, it has to be the all-time record, I don't think she's ever been in anything that was bad. I mean, honestly. Think of it, she's gone through everything, from wars to anything you could go through. And she's always handled it incredibly well. She's amazing -- she's an incredible woman, actually."

Trump also said that Meghan, the Duchess of Sussex, seems to be taking things really personally," when it comes to the media. Farage said that it is something Trump should understand and asked if he felt sorry for her. Trump indicated there was something wrong with taking it so personally. It's an interesting take given Trump too takes it personally when his misdeeds are outed by the media. He's even gone so far as to call the press "the enemy of the people."

You can see the British response to Trump below:

So, do you think @realDonaldTrump and the Queen hit it off then? Hard to tell from this @LBC interview with @Nigel_Farage. #trump #lbc
— Joanna Lowy (@Joanna Lowy)1572545628.0