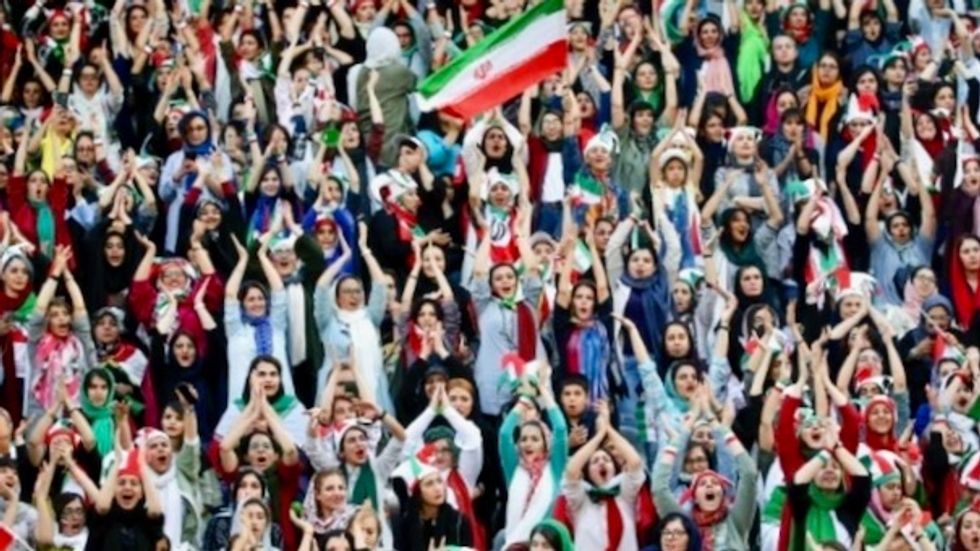 Waving flags and snapping selfies, thousands of Iranian women on Thursday attended a football match freely for the first time in decades, after FIFA threatened to suspend the country over its controversial stadium restrictions.

Elated female fans wore the national green, white and red flag around their shoulders and over their hair as they streamed into a tiny section of Tehran's 100,000-capacity Azadi Stadium for Iran's 2022 World Cup qualifier against Cambodia.

Some donned sporty hats over their headscarves, while others painted their faces with the colors of the flag.

Their beaming smiles underscored a day that felt victorious for the female fans, even before the match began.

And with every goal the Iranian team scored, the cheers in the women's section grew louder.

By the end of the game, the Iranian side had won with a blowout of 14-0.

For nearly 40 years, the Islamic republic has barred female spectators from entering football and other sports stadiums, with clerics arguing women must be shielded from the masculine atmosphere and sight of semi-clad men.

That came after the death of Sahar Khodayari, who set herself ablaze last month outside a court in fear of being jailed for trying to attend a match.

Dubbed "Blue Girl" because of the colors of the club she supported -- Esteghlal FC -- she had reportedly been detained last year when trying to enter a stadium dressed as a boy.

Her death sparked an outcry, with many calling for Iran to be banned and matches boycotted.

In a statement on Thursday, FIFA feted the match as "a very positive step forward".

"FIFA now looks more than ever towards a future when ALL girls and women wishing to attend football matches in... Iran will be free to do so, and in a safe environment," it said.

"There can be no stopping or turning back now."

According to an AFP journalist, between 4,000 to 4,500 women watched the game on Thursday while 6,000 men also attended.

State news agency IRNA earlier said that 3,500 women had purchased tickets ahead of the match.

Even before the starting whistle blew, female fans cheered joyfully as the name of each Iranian player was announced over the loudspeakers, an AFP journalist at the stadium said.

On previous occasions, attendees have been handpicked by the authorities.

Saluting the move, pro-reform newspaper Sazandegui published a photograph of two female football supporters, coupled with the headline: "The women of freedom."

For some men too, Thursday's game was worthy of celebration.

"It's a great feeling that we're here together, finally. We only wish this can continue in the future," a male fan told AFP.

Iranian female football fans may have a lot to fight for yet.

FIFA has demanded that the authorities allow an unrestricted number of women to attend all games. But Tehran has yet to announce that they will be granted unrestricted access to all matches.

Even for Thursday's match, many women who were unable to get tickets in time for the game were left disappointed.

On Twitter, critics had used the hashtag #WakeUpFIFA to campaign for more tickets for women.

"The Iranian authorities should lift all restrictions on women attending football matches, including domestic league games, across the country," the rights group said.

Government spokesman Ali Rabii, a supporter of the move to allow women into stadiums, wrote on Telegram that following his mediation efforts, some women without tickets were also allowed into Azadi stadium on Thursday.

"Calm, disciplined, happy, excited, safe, egalitarian and elegant: this was Azadi stadium today, thanks to the presence of our nation's girls and women!" the official wrote on Twitter.

Rep. Adam Kinzinger (R-IL) on Tuesday had some harsh words for Sen. Josh Hawley (R-MO) and his attitude toward the pro-Trump riots at the United States Capitol building.

During an interview with CNN's Alisyn Camerota, Kinzinger was asked whether he thought GOP lawmakers such as Hawley and Sen. Ted Cruz (R-TX) would take their jobs seriously and ask intelligent questions of FBI Director Christopher Wray about intelligence failures leading up to the January 6th riots.

Racing's reputation suffered another blow on Tuesday as jockey Rob James apologised for a video circulating of him jumping on to a dead horse and pretending to ride it.

James's apology comes hot on the heels of three-time Grand National winning trainer and fellow Irishman Gordon Elliott also apologising for sitting on a dead horse whilst on the phone.

A new report from Politico this week tried to shed light on a phenomenon many observers have noticed in the White House. Vice President Kamala Harris seems to have a more central and emphasized role in the new administration than is typically afforded to her position — more significant than even Joe Biden's role in the early days of President Barack Obama's first term.

According to Politico, this is completely deliberate on President Biden's part — because he wants to treat Harris better than Obama treated him: