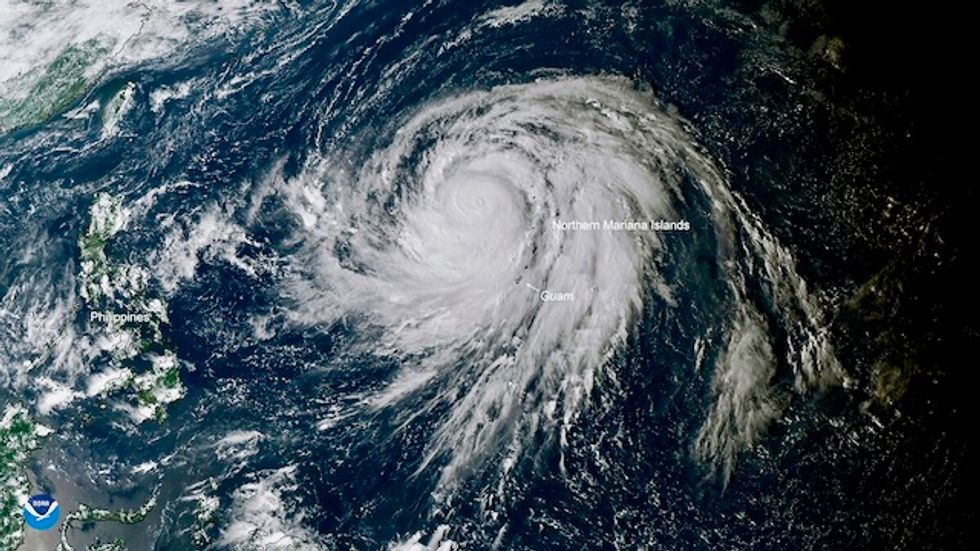 Japan braced on Friday for a powerful typhoon barreling towards Tokyo that has already forced the cancellation of two Rugby World Cup matches, disrupted the Suzuka Grand Prix and grounded flights.

Overnight, Typhoon Hagibis was downgraded slightly from its "super typhoon" status, but was still forecast to be packing maximum gusts of 216 kilometers per hour (134 miles per hour) when it makes landfall late Saturday.

Japan's Meteorological Agency (JMA) warned that areas from the west to the northeast of the country would experience "brutal winds and violent seas".

"We ask you to evacuate or take measures to ensure safety early, before winds and rain intensify, and before it gets dark, in order to protect your own life and the lives of your loved ones," JMA forecaster Yasushi Kajiwara said at a press briefing.

"The rain could be record-breaking," he added.

"The predicted conditions and severity of a possible disaster are tremendous."

The massive storm is expected to dump up to half a meter (nearly 20 inches) of rain on the Tokyo area in the 24 hours to midday on Sunday, with up to 80 centimeters forecast for the central Tokai region.

Surging sea levels could inundate homes and facilities in coastal areas with the storm approaching at a time of high tides with a full moon, the JMA warned.

The storm has wreaked havoc even before making landfall.

On Friday morning, organizers said they would cancel Saturday's entire program at the Japanese Grand Prix in Suzuka, pushing qualifiers to the following day.

"The FIA (governing body) and Formula One support this decision in the interest of safety of the spectators, competitors and everyone at the Suzuka circuit," an FIA statement said.

The decision means the teams and drivers will have just Friday's two practice sessions in which to prepare for Sunday morning's qualifying session.

And the typhoon has also forced Rugby World Cup organizers to cancel two Saturday fixtures: England-France in Yokohama outside Tokyo, and New Zealand-Italy in Toyota City.

The organisers said it had been a "very difficult decision", but Italy, who still had a mathematical chance of qualifying for the quarter-finals, were livid.

Captain Sergio Parisse fumed that the game would have been played if the All Blacks had needed the points, though New Zealand denied any preferential treatment.

The storm could also jeopardize a key match-up between Scotland and Japan on Sunday.

Scotland need to beat the hosts in Yokohama on Sunday to have a chance of reaching the quarter-finals. But if the match is cancelled they will be going home.

Officials are not expected to make a final decision on that match until Sunday morning, after they have assessed potential damage to the venue and transport links.

AFP / Odd ANDERSEN
The approaching typhoon is expected to cause transport chaos over a holiday weekend in Japan, with many forced to cancel travel plans

The storm is expected to cause transport chaos over a holiday weekend in Japan, with many forced to cancel travel plans.

And the operator of the main bullet train service linking Tokyo and western cities said it would suspend all services between the capital and Nagoya on Saturday.

The storm will even force the first-ever all-day typhoon closure of Tokyo's Disneyland and DisneySea theme parks, with doors shut from Saturday until at least noon on Sunday, a spokesman for their operator Oriental Land told AFP.

Japan is hit by around 20 typhoons a year, though the capital is not usually badly affected.

Hagibis is bearing down on the region just weeks after another powerful storm, Typhoon Faxai, hit the area with similar strength, killing two and causing major damage in Chiba, east of the capital.

More than 36,000 homes were damaged or destroyed in Chiba, and the local government has urged those in damaged buildings to take shelter elsewhere during the storm.

Local officials equipped with satellite phones will be dispatched across the region to ensure communities can seek help during and after the storm.