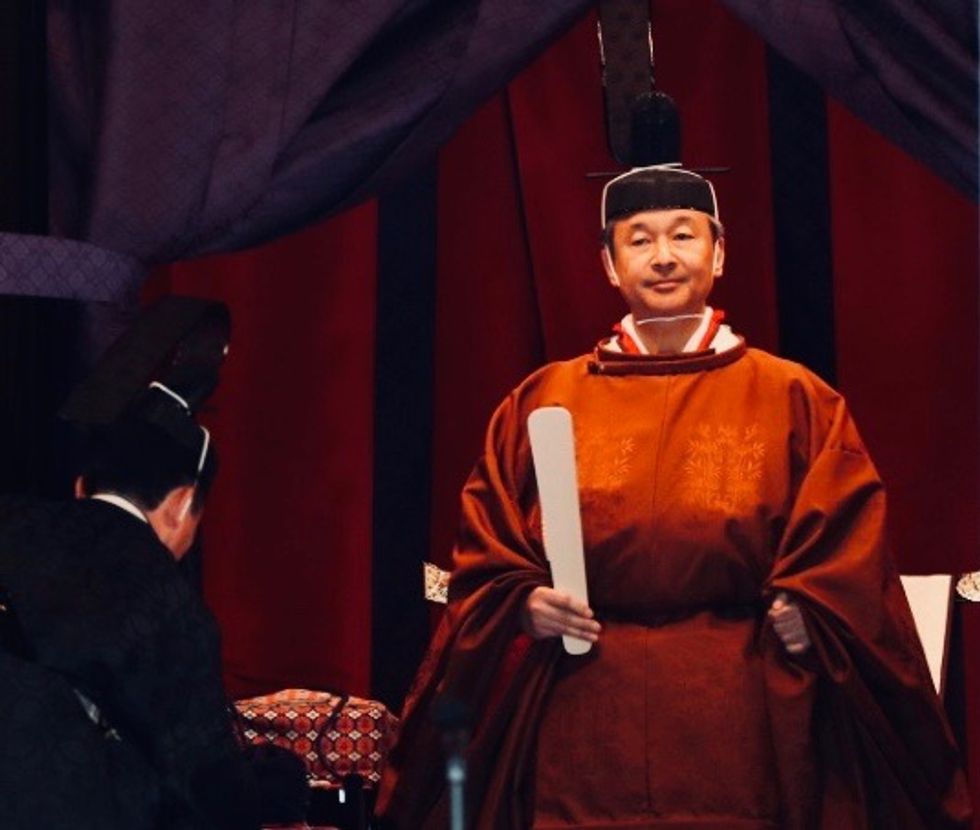 Japan's Emperor Naruhito completed his ascension to the Chrysanthemum throne on Tuesday in a ceremony steeped in the traditions and grandeur of a monarchy that claims 2,000 years of history.

The rituals cemented a transition that began with his father's abdication earlier this year, and drew royalty and political leaders from around the world.

A public parade for the event was postponed after a deadly typhoon, but the government went ahead with the granting of pardons for more than half a million people convicted of minor offenses including traffic violations.

"I hereby declare my enthronement at home and abroad," Naruhito said, dressed in a voluminous draped robe topped with a copper overcoat.

Empress Masako, a Harvard-educated former diplomat, stood silently before her throne in a similar, smaller structure, wearing a multi-layered kimono and a highly stylized hairpiece.

Naruhito pledged to "pray for the happiness of Japanese people and world peace" and "fulfill my duty as the symbol of Japan and of the unity of the people of Japan."

Standing before him, flanked by royal family members also wearing heavily decorated traditional robes, Prime Minister Shinzo Abe promised the people of Japan would "respect your highness the emperor as the symbol of the state and of the unity of the Japanese people."

He then raised his hands three times, shouting "Banzai!" or "Long live the emperor!"

The solemn ceremony was conducted almost entirely in silence, with royal family members gliding wordlessly into the room and standing throughout.

Only the sounds of a gong and drum signaled the stages of the ritual, with a low, loud beat indicating to guests representing around 180 countries and institutions that it was time to stand and hear the proclamation.

And it was over almost as soon as it had begun, with attendants closing the purple curtains and the royals quietly moving out of the room.

Outside, a small crowd of well-wishers gathered despite driving rain that forced the palace to move some of the guests inside.

They watched the ceremony on their phones outside and listened as a gun salute was sounded when it was complete.

"I feel as a Japanese person that this is such a historic moment," said Kyoko Tanaka, 51.

"I want the royal couple to be a good example for Japanese people, like their predecessors were," she added.

Others too said they had felt compelled to come to the palace, despite the parade being postponed until November 10.

"I know we can't see the ceremony, but I wanted to feel the atmosphere in front of the palace," Shoko Koeda said, watching the proceedings on her phone.

"This is a historic moment. I feel special."

The Japanese royal family commands relatively broad support, although polls suggest the younger generation is less interested in the monarchy.

A poll released by national broadcaster NHK on the eve of the ceremony found 70 percent of voters in the country hold "friendly or favorable" views towards the imperial family.

But despite the support, the monarchy that is sometimes described as the world's oldest faces other concerns, particularly succession.

Emperor Naruhito and Empress Masako have one child, a 17-year-old daughter named Aiko. But imperial rules allow only a man to ascend the throne, and royal women lose their titles if they marry a commoner.

With Naruhito's ascension, his brother Akishino is now crown prince. And Akishino's son -- 13-year-old Hisahito -- is currently the only other remaining successor.

The question of altering the succession rules has been raised -- NHK found 74 percent support the shift -- but no formal moves have yet been made to make the changes.