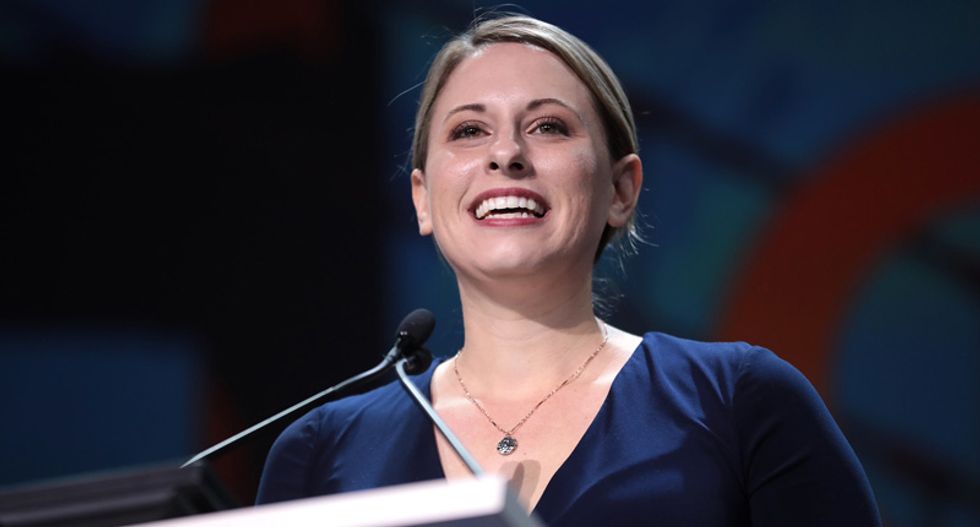 U.S. Congresswoman Katie Hill speaking with attendees at the 2019 California Democratic Party State Convention at the George R. Moscone Convention Center in San Francisco, California. (Gage Skidmore)
Over the past week, a minor scandal in Congress has served to showcase how different Republicans and Democrats are on issues of sexual and domestic abuse — so different as to nearly be opposites. Indeed, this demonstrates that conservatives are not just indifferent to serious incidents of sexual and domestic abuse but, in some cases, are eager to support or encourage men who commit such acts. Meanwhile, Democrats once again proved that they are willing to uphold strict ethical standards meant to prevent abuse and harassment, even if the price of doing so means giving misogynists and homophobes a "win."This article was originally published at Salon

The scandal in question concerns Rep. Katie Hill, D-Calif., a freshman member of Congress elected in last year's "blue wave," who announced on Sunday evening that she would resign. Hill continues to accuse her estranged husband, Kenny Heslep, of waging an abusive campaign to control and humiliate her now that their relationship is over.

It seems indisputable that Hill is the victim here. If her husband is really behind this, then it's an act of domestic abuse as well as sexual abuse. So why is she resigning? Unfortunately, the other woman in the photos was, at the time, a member of Hill's campaign staff. While House ethics rules barring sexual relationships between members and staff do not officially apply to campaign staff, as Hill herself noted, "even a consensual relationship with a subordinate is inappropriate." (She has denied rumors that she also had an affair with a member of her congressional staff.) That's no doubt why Democratic House leaders are supporting Hill's decision to give up her seat.

Still, what's remarkable about this turn of events is how much it illustrates the differences between Democrats and Republicans on issues around domestic and sexual abuse. None of this would be happening if the conservative press wasn't so eager to help an abusive husband commit an act of abuse. Publishing the nude photos of Hill, as RedState and The Daily Mail did, is an act of complicity with abuse. It goes far beyond standing by and letting the abuse happen. They were helping with the abuse.

Meanwhile, Democrats, by accepting Hill's resignation, were holding her fully accountable even though her consensual affair falls toward the the most mild end of the spectrum of what is euphemistically deemed "sexual misconduct." Certainly, it's not as bad as what multiple women accused former Sen. Al Franken of doing, which was groping them against their will. And it's not even close to what Supreme Court Justice Brett Kavanaugh was accused of doing, which was multiple incidents of attempted rape and sexual assault. It can't hold a candle to what Donald Trump has been accused of doing — and bragged about doing — that being multiple counts of sexual assault and at least one alleged rape.

Multiple right-wing commentators — such as those at the Federalist and RedState and, of course, Fox News — spent days feigning outrage about Hill's relationship with her staffer and criticizing mainstream media for not giving more oxygen to the story. (The idea that some mainstream journalists might not want to side with an abuser against his victim didn't occur to any of these critics.) This outrage, of course, is disingenuous in the extreme, since the people who act appalled by this consensual relationship eagerly support Trump, despite a credible rape allegation and a well-known recording in which he brags about his sexual assault techniques.

Instead, the leering tone of the coverage suggests that what actually offends Hill's critics is that she is bisexual and was open to having an unconventional sexual arrangement. (The cheesy word "throuple" was prominent in the coverage from conservative outlets.)

There also appears to be some outrage on Heslep's behalf at the supposed emasculation of being married to a powerful woman. The New York Post running a story shaming Hill for supposedly asking Heslep "to stay home and do all the housework because she hated chores." Buried at the bottom of the story is an admission by Heslep that he hasn't worked since 2014 and that Hill had gotten him his previous job, which suggests that her request that he do more of the housework was not all that outrageous.

Many liberals are understandably frustrated about Hill's resignation, because Republicans who do far worse things get away scot-free. But this is about much more than a partisan double standard. The reality is that there is a genuine disagreement between conservatives and liberals about gender roles, sexuality and power.

Ultimately, conservatives are being entirely consistent about one thing: a bedrock belief in the rightness of patriarchy. The muted response to the bad behavior of Trump, Kavanaugh and other such men flows from a belief that men are meant to be the dominant sex and that mistreating and abusing women is, to be blunt, a perk of being a privileged and powerful man. Rules governing sexuality, in this worldview, are about maintaining compulsory heterosexuality and making women second-class citizens. That's why so many conservatives oppose reproductive rights and same-sex marriage, while blowing off straight male adultery and even sex crimes.

So complaining about double standards isn't likely to work. Republicans don't care if they're being unfair. If anything, being unfair is the point, if their ultimate goal is to restore a society where men are dominant and women subordinate. That's also why it won't work for Democrats to abandon their values by allowing their own members to get away with unethical behavior just because that's what Republicans do. After all, the ultimate goal of Republicans is to end any accountability for sexual harassment and even sexual abuse, and it only helps them if Democrats play along for narrow political gain.

Unfortunately, there is no quick fix for these double standards. Progressives should continue living their values and, whenever possible, should call out conservatives and hold them accountable for their grotesque willingness to support abusive men. In the long run, voters will understand these differences between the parties, and back the one that not only believes in equality and fair treatment, but supports that belief with action.