Lake Maracaibo has been polluted by a permanent black tide 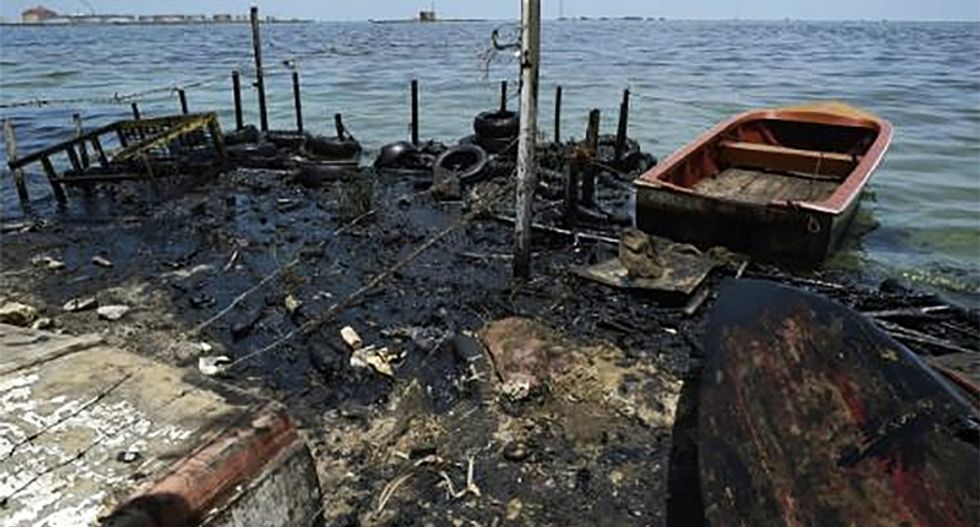 Lake Maracaibo in Venezuela has been badly polluted due to dilapidated oil wells and piplines (Photo: AFP / YURI CORTEZ)

Smelling like an oil refinery, the vast expanse of Lake Maracaibo has become polluted by its own reserves of crude as Venezuela's economic collapse has left wells and pipelines in ruin.

This huge body of water, in the country's northwest, covers 13,200 square kilometers (5,000 square miles) and empties into the Caribbean, but it is covered by what locals call a "permanent black tide."

It's a hazard not just to the lake's fauna and flora, but also to the livelihoods of the people who rely on its wildlife.

Fisherman Giovanny Villarreal says much of his daily catch goes to waste.

"Half of our catch reeks of oil. As no-one buys it, we throw it back into the water," he said, displaying a basket of crabs.

His home in Cabimas on the lake's eastern shore is built on stilts to guard against flooding, but the family suffers from other problems.

"Sometimes we can't sleep for the smell of gas produced by the oil," said Villarreal.

"It gets into our lungs, especially the children."

The pollution is visible everywhere. The water is fluorescent green while the shores are dotted with thick black gunk.

High up in a palm tree, a bird haplessly tries to clean its wings of sticky oil.

"Look, thanks to the southern wind, there's oil everywhere," said Paul, a fisherman neighbor of Villarreal's who declined to give his surname.

His boat's hull is covered with a coat of oil while his fishing nets have turned black.

"When we go out fishing, we come back stained by oil," he said. "What makes it even worse for our health is that we wash with petrol to remove the oil."

Ironically, the oil that sits deep underground beneath the lake is how Maracaibo, Venezuela's second city, and the surrounding area made its fortune.

"They've been extracting oil from beneath this lake for 100 years," said economist Orlando Ochoa, a specialist in the oil sector.

Things have changed over the last decade, though, as Venezuela has descended into economic crisis.

Venezuela's oil production stood at 3.2 million barrels a day 10 years ago, it's now down to less than one million.

The oil price crash of 2008 hit the sector hard, as have US sanctions and a lack of infrastructure investment.

Lake Maracaibo has been badly affected.

"We're producing 160,000 barrels a day, that's a sixth of the production from just six years ago," said Ochoa.

State oil company PDVSA cannot afford to maintain the thousands of kilometers of underwater cables and pipelines, and Ochoa says "the infrastructure is degrading and pollution increasing."

PDVSA does not publish figures on the amount of oil leaking into Lake Maracaibo and didn't respond to AFP's questions on the subject.

Yurasi Briceno, a biologist at Venezuela's scientific research institute, is studying fauna in the northern part of the lake.

"There are eight wells, three of which have been permanently leaking oil since last October," she said.

Briceno says she often comes across dolphins and manatees with injuries on their skin from oil.

"We humans are at the end of the food chain. By eating crabs or prawns from the lake, we're also poisoned," she said.

Villarreal is furious. He's been telling the oil industry and the environment ministry for 10 years about the problems.