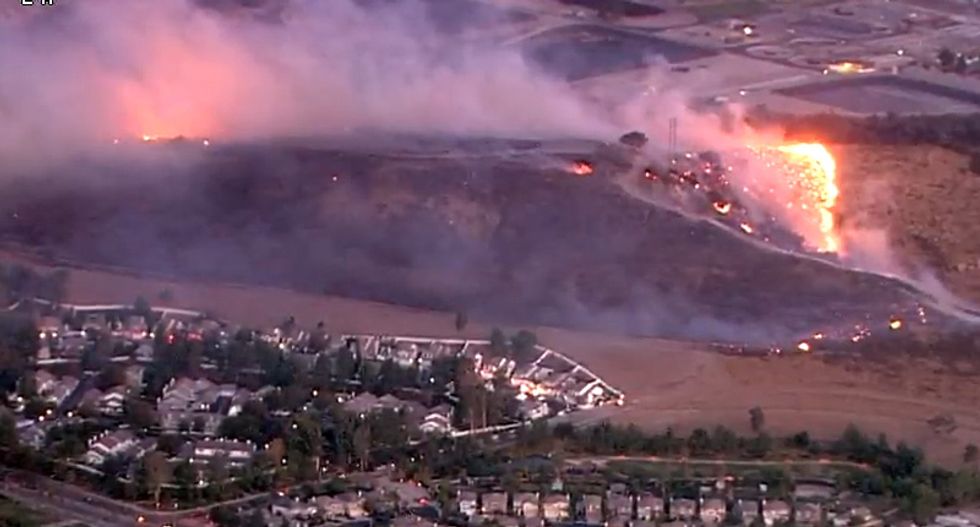 Firefighters in California battled a new fast-moving blaze on Wednesday that threatened the Ronald Reagan Presidential Library, as rare "extreme" red flag warnings were issued for much of the Los Angeles region.

The so-called Easy Fire in the Simi Valley northwest of Los Angeles erupted around 6:00 am, forcing the evacuation of the library and nearby homes as it spread to more than 900 acres (365 hectares), officials said.

Fire crews raced to protect the hilltop building from the flames raging out of control and fed by hurricane force wind gusts.

Melissa Giller, a spokeswoman for the library, told local radio that the archives and much of the memorabilia at the facility were safely stored in an underground fireproof vault.

She said the flames were closest to a pavilion housing a former Air Force One aircraft.

The National Weather Service said powerful Santa Ana winds, with potential gusts of up to 80 miles per hour (130 kilometers per hour) in mountainous areas, had created "extremely critical" conditions in parts of southern California.

"We expect the Santa Anas to be howling," the NWS said.

Closer to Los Angeles, firefighters were battling the Getty Fire, which began near the famous Getty Center museum on Monday and by Wednesday had burned 745 acres with 27 percent containment.

Authorities said they feared the fire, which was caused by a tree branch that fell on power lines, could spread because of the strong winds expected to last through Thursday evening.

LAFD spokeswoman Margaret Steward said that in anticipation of the record-strong Santa Ana winds, all staff had been mobilized and additional backup brought in.

"These resources will be strategically placed in key locations that have a history of being prone to wildfire," she said.

More than 5,000 firefighters backed by 600 fire engines, 27 helicopters and air tankers were battling the inferno, which has destroyed 206 homes and commercial properties, including several wineries, and was now 30 percent contained, Cal Fire said.

California Governor Gavin Newsom has declared a statewide emergency because of the fires and the state's largest utility, Pacific Gas and Electric, has been imposing rolling blackouts in the northern and central parts of the state in a bid to reduce the fire risk.

Some 18 million Californians live in areas affected by the "critical" or "extremely critical" red flag warnings that have been issued.

The wildfires spreading through the state come as California is still reeling from the aftermath of the most destructive wildfire in state history -- the Camp Fire, which destroyed the town of Paradise and killed 86 people last year.

Similar blazes in northern California, including in the Napa and Sonoma wine regions, killed 44 people in 2017 and destroyed thousands of structures.