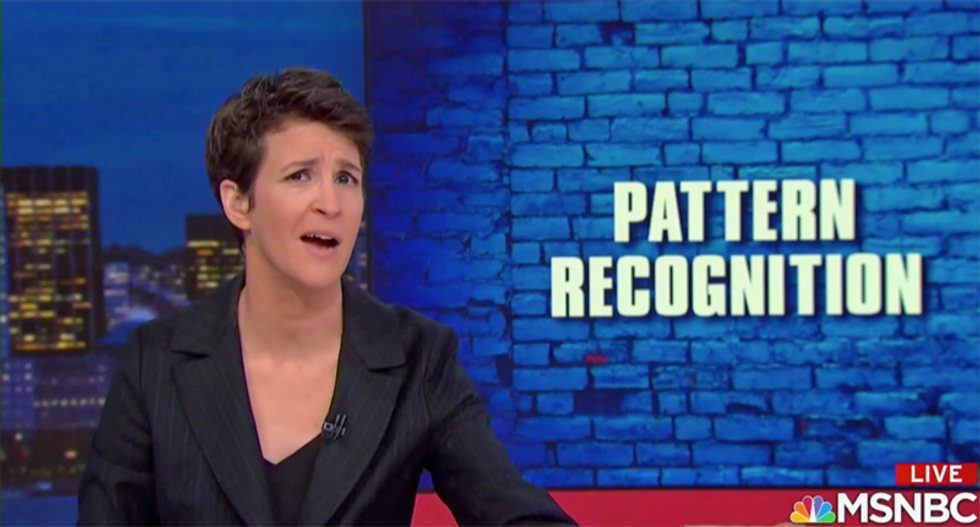 MSNBC's Rachel Maddow on Monday warned that Russia and the Republicans are running the "exact same play" against Democrats in 2020 -- and this time will be aided by the United States Justice Department.

"And they are playing it again already for the next election. And some of it is happening just like it did in 2016. And some of it is worse and I think it’s going to be more powerful than it was in 2016. In part because this is a second draft for these guys, right? They ran this play in 2016. They worked out some of the kinks," she explained. "Now they’ll do it again with the benefit of knowing what worked for them and what didn’t work the first time around. It’s a second draft. It’s going to be better and more polished."

"More seriously, though, I think some of this is also going to be worse this time around, because this time, the intended beneficiary of this same play -- this slime and false equivalency play -- this time, he’s not just a candidate, he’s a president. With the resources of the U.S. government at his disposal and his own willingness to use the resources of the U.S. government to benefit himself politically," Maddow feared.

"Russia right now today is playing it online exactly the same way they did in 2016. I mean, it’s literally today, Facebook took down these Russian meme-making anti-democratic online personas," Maddow reported. "These pro-trump online engines. So that part is in place again, just exactly like it was before. I mean, why wouldn’t the Russians do it again, right? It’s not like they got in trouble for doing it the first time."

"So we know politically that things going to get weird, right? We are going to have — we already have more foreign interference, weaponizing social media in favor of Trump and against the Democrats and particularly trying to divide the left and the center against itself. We’ve got that already," she noted. "We’re also going to have another run of the no puppet, no puppet, you’re the puppet, blame the other side stuff. From Trump and from conservative media and from Trump supporters."

"What is new is that this time it really does seem that they are going to use the power of the U.S. Justice Department to help them make that case that the Democrats are the real source of the scandal here," Maddow warned. "And that is what is new about what is coming and what we are already starting to live through for the 2020 campaign. And because the Justice Department will be the source of these claims that the Democrats are the real scandal here, that will be irresistible to most of the media."