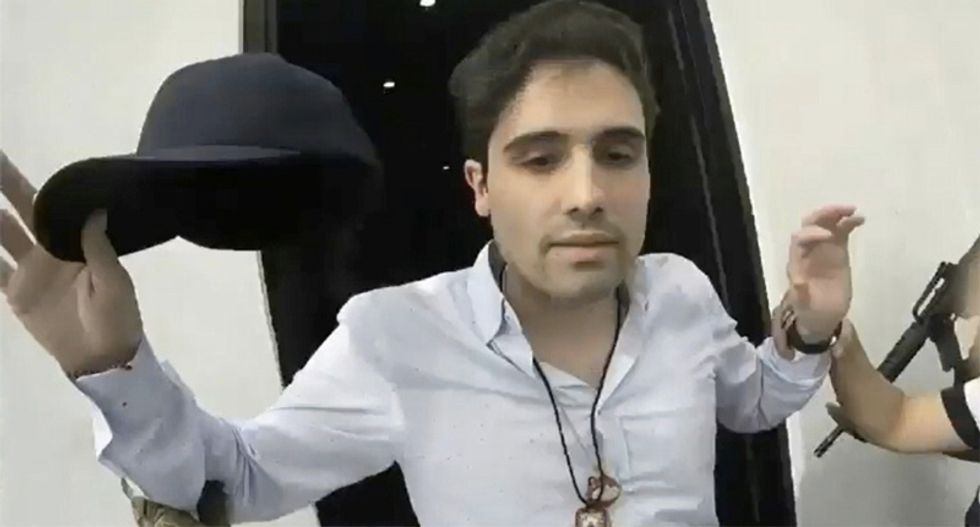 Mexico released a video Wednesday showing the moment jailed drug kingpin Joaquin "El Chapo" Guzman's son was arrested earlier this month, in what turned out to be a failed undertaking that ended with his release

"Let everything that happened be known," he said of the mission that shocked the country and led to more than five hours of clashes between the Sinaloa drug cartel and security forces throughout the city of Culiacan, where 750,000 people live.

The recording -- which appears to have been taken by a camera mounted on one of the soldiers' helmets -- shows the moment that one of El Chapo's 10 children, 28-year-old Ovidio Guzman, a woman, and two other men come out of a house with their hands up, stepping into a garage.

Security forces dressed in tactical gear and wielding large guns gesture for Guzman and the others to come through the door of a white building.

"Come on! Calmly, calmly," they can be heard saying in Spanish, as alleged trafficker Guzman puts on a baseball cap.

Then, they guide him to his knees against a wall.

The woman can be seen telling the soldiers there are children inside the house, which is located in the Tres Rios neighborhood.

In the next shot, Guzman is back on his feet and on the phone, appearing to give orders to stand down.

Wednesday morning's press conference did not include footage of the moment Guzman went free, but officials did show video of National Guard members being attacked throughout the city.

"And when you see those things, what happened, is when you better understand why the operation was ordered to stop," Lopez Obrador said after the video ended.