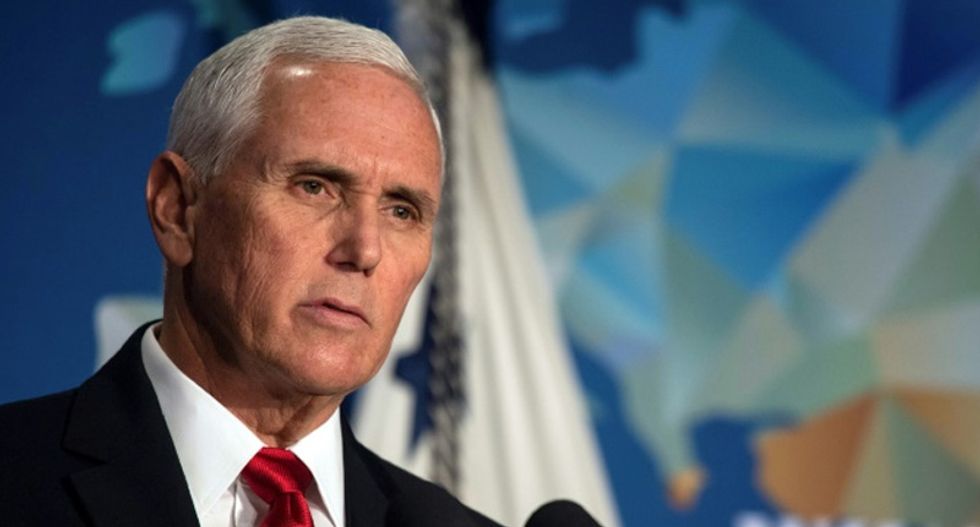 US Vice President Mike Pence on Thursday sharply denounced the NBA for not speaking out more forcefully on China as he vowed support for Hong Kong's pro-democracy protesters.

In a wide-ranging speech on US-China relations, Pence lashed Beijing over its trading behavior, assertive military posture and treatment of religious minorities but also said the United States ultimately wanted a "constructive" relationship.

"The United States does not seek confrontation with China. We seek a level playing field, open markets, fair trade and a respect for our values," he said at the Woodrow Wilson Center for International Scholars.

He reserved his strongest language for the National Basketball Association -- whose players have often clashed at home with President Donald Trump -- as he waded forcefully into a row over whether corporate America has sacrificed values in their search for profit in China.

"Some of the NBA's biggest players and owners, who routinely exercise their freedom to criticize this country, lose their voices when it comes to the freedom and rights of other peoples," Pence said.

"In siding with the Chinese Communist Party and silencing free speech, the NBA is acting like a wholly owned subsidiary of that authoritarian regime," he said.

Pence hailed the mass movement that has erupted in Hong Kong seeking to preserve the city's semi-autonomous status after Beijing attempted to allow extraditions into the mainland.

"We stand with you. We are inspired by you," Pence said.

"We urge you to stay on the path of non-violent protest. But know that you have the prayers and admiration of millions of Americans," he said.

China, a major basketball market, retaliated by ending sponsorships and canceling broadcasts of pre-season games held in the country. The NBA then dropped all media events of the tour but later said it supported free speech.

Pence's denunciation of players was likely a reference to Lakers superstar LeBron James, who took issue with Morey's tweet on Hong Kong.

Pence also criticized footwear giant Nike for pulling Houston Rockets merchandise in China. Nike has a sponsorship deal with Colin Kaepernick, the American football quarterback who has been without a job after refusing to stand for the national anthem in a protest against racism.

"Nike promotes itself as a so-called 'social-justice champion,' but when it comes to Hong Kong, it prefers checking its social conscience at the door," Pence said.

Pence's speech was billed as a follow-up to a hard-hitting address he gave a year earlier in which he accused China of improperly seeking to influence congressional elections to defeat Trump.

Pence renewed his assertion that China wanted Trump to lose power. But he also repeated Trump's hope that the world's two largest economies can come to an accord to end a mounting trade war that has triggered tariffs on billions of dollars in goods.

But he declared dead the optimism of successive US presidents that trade will "transform Communist China's authoritarian state into a free and open society."

Pence also took a firm tone on Taiwan after two small states, Kiribati and the Solomon Islands, became the latest to pull away from the dwindling number of states that recognize Taipei instead of Beijing.

"The international community must never forget that its engagement with Taiwan does not threaten the peace, it protects the peace on Taiwan and throughout the region," Pence said.

"America will always believe that Taiwan's embrace of democracy shows a better path for all the Chinese people," he said.

Pence, however, made clear that the United States still recognizes Beijing and not Taiwan, a self-governing democracy where China's nationalists fled in 1949 after losing the mainland's civil war.