'My whole life is guilt': The former extremist who wanted to blow up mosques disavowed his bigotry and converted to Islam 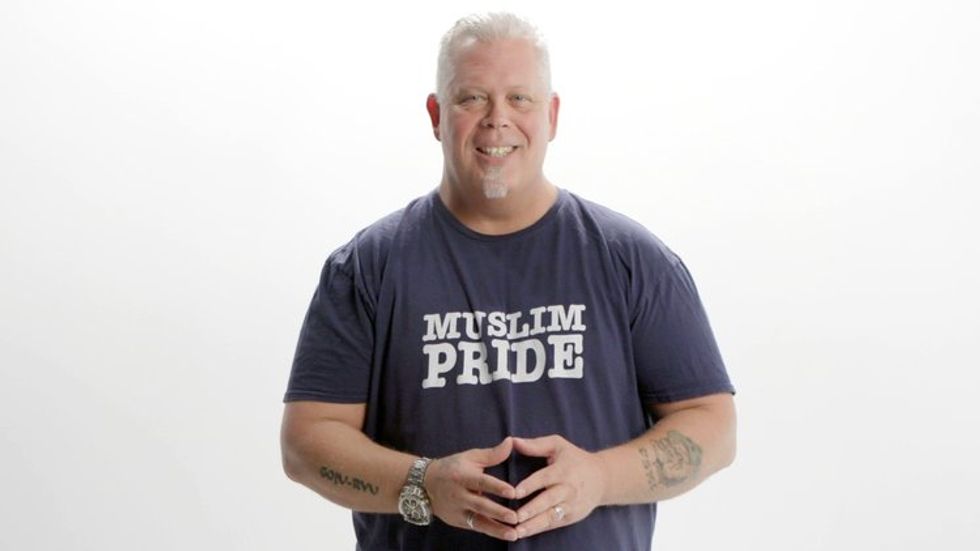 Richard “Mac” McKinney was filled with anger after 25 years of military service. He felt like something had been taken from him after he was injured in Iraq in 2006.

“I wanted to die in combat,” he told Salon. “Because the thing is that in this country, no matter what you did in the past, you come back in a flag-draped coffin, all your sins are forgiven. You’re forever known as a hero.”

Since what he refers to as his “destiny” was gone, he developed a shocking and disturbing plan: start a war of his own. In his hometown of Muncie, Indiana, there was an Islamic Center. He says he decided to bomb it. His mindset at the time, he explained to Salon, was this: “You’re going to take my war away, I’ll have my own.”

Then one day, his seven-year-old daughter came home from school with a story. “She said this lady came up to pick up her son and she was dressed as a Muslim woman. Long robe, hijab . . . and she was telling me this because she knew [I] had been overseas and seen a lot of stuff and maybe [I] knew where she was from or something,” he said. “I went off. Started cussing . . . I flipped out. I didn’t want my family around 'those people.' The infamous bigoted statement: 'those people'. And it was the look on her face. It’s like she was even wondering if she still loved me or not.”

He decided to visit the center — not to engage in violence, but to learn more — after that conversation with his daughter, which he describes as "a moment of clarity."

That began McKinney's journey to converting. Now he's Muslim and a former president of the Islamic Center he once wanted to attack. McKinney’s story appears on an episode of Josh Seftel’s webseries “The Secret Life of Muslims,” which was nominated for an Emmy in 2017.

Seftel told Salon McKinney's story “is the kind of story that I believed could reach a broader audience.” It ended up running on CBS Sunday Morning a week after the Christchurch mosque shooting in New Zealand.

“A week before they were going to run it, Christchurch happened, and I think there was a moment where it was, ‘Should we run this or not?’ But they felt like it, and we all felt like, it was so relevant,” Seftel told Salon. “And so it aired the week after Christchurch and got a huge reaction, huge response. Mostly positive.”

Salon sat down with McKinney at Original Thinkers to learn more about how this turnaround happened. This interview has been edited and condensed for length and clarity.

I’d like to hear more from you about where you grew up and what led you to join the Marine Corps.

I grew up in Cincinnati. My parents were divorced, lived with my mom, and my grandparents. When I was 12, I actually moved with my dad because I had disciplinary problems. I went to school when I wanted to go to school and that kind of thing, and then I was with my dad and I ended up getting involved in drugs and stuff. When I turned 16, 17 years old, I ended up running away from home, and lived on the streets for a few months. Then I moved in with my aunt and uncle in Indiana, in Lawrence, Indiana, which is right outside Indianapolis. And long story short, I got expelled from high school for dealing drugs.

It was ’85, ’86, you could still join the military with certain waivers. You just had to meet the criteria. I met the criteria, so — I lied, but I met the criteria — and that was it. I’m glad I did it, but I don’t understand how a person with a problem with authority, on their own, makes the decision and joins the Marine Corps. But I knew that I was either going to end up in prison or dead and I needed to get out of there.

What was your time in the Marine Corps like?

I joined the Marine Corps in 1986. I got out in ’93, so it was about seven and a half years. Got out after my second tour to Somalia. I decided that being 25 years old and already a three-time combat vet, I needed just do the civilian thing. So, I did.

Problem was that I was what was called a “grunt” that wasn't specially trained. I had a GED, which I got while I was in the Marine Corps, because I never graduated high school, but I didn’t have a trade. The trades I had, me and my buddies would sit around after missions a lot of times, we’d say, “Man, there’s only three things I can do in the civilian world. That’s be a drug dealer, a pimp or a hitman for the mob. I don’t know anything else.”  I don’t blame the military for that because I got the job I wanted [as a Marine] but that job just didn’t convert to the civilian world. I blame myself a lot for that.

I got out for two years, got a laboring job, and just had enough. I’d been through too much, seen too much, done too much, I walked off the job right into the Army recruiter’s office, “When does the bus leave?” And I joined the Army. I was in the Army for about six years, got out, went to the Reserves, decided, “OK, we can still be in the military, let’s try the civilian thing again. I’m a little older now, maybe a little more mature.”

Shortly after that crazy people decided to fly planes into buildings, so the rest of it was all active duty, which I was happy about. I ended up with 25 years of service total.  And I didn’t want to get out. I wanted to stay in, but because I was injured in Iraq, they medically retired me.

Then you arrive back in America. How do you then start plotting to attack an Islamic Center?

When I was forced to get out of the military, my hatred for Muslims increased.

When I talk about hatred, I try to get people to understand what that really means. It’s not like your son or daughter [saying] “I hate broccoli.”

The example I use in trying to define my hatred was when I was in Bosnia in ’04, I had my own interpreter. I was an operator with psyops unit. And one of the jobs that I get called to do would be giving radio interviews, PR stuff. I had my interpreter.

But the thing is that she was a Muslim.

Just because she was Muslim and came from a Muslim family, my friends would ask me, “Man, you like [her], right?” “You know what, I do man, she’s been good to us bro, she really has.”

[What I thought, though, was] I’d make sure she goes quick, but she still got to go because she’s Muslim. So when you can talk about your hatred being so deep that you’re willing to take the life of someone you actually care about, that’s hate.

What changed in you?

Within eight weeks of me stepping foot in the Islamic center the first time, I became a Muslim.

And that, even me looking back now, I was like, “There’s no way. There’s no way.” Even if I didn’t hate them, eight weeks? Come on. Because this is totally different than anything I’d been brought up with.

I really never really considered myself a Christian, but as a kid I went to church camp, did Bible studies, played on church softball team. I was pretty well-versed in the whole Christian society thing.

There were two verses of the Koran that changed me.

It’s unclear to me what happened with the FBI and how you were able to move through that.

Still be here and not locked up somewhere?

With the FBI, it was actually after I had already disposed of everything. Didn’t need it anymore. I’m a Muslim, I don’t need the stuff. I’m not going to hurt anybody anymore. I have no desire to hurt anybody. I just want to go up and hug everybody. I didn’t have anything. But I started telling my story to people, because I thought it was a story that needed to be told. And I think my story might help people a little bit.

The FBI showed up and we talked. I didn’t hold anything back. Told them exactly what it was and exactly what I’m doing now. I explained things to them and I told them what I was doing now and I told them I’m here to make peace. Of course, the investigation went on. They had to do what they had to do. And of course, there’s no explosives to be found, there’s no evidence, so case kind of got closed.

So, you were sharing the story with your friends at the Islamic center?

I didn’t tell them anything until like six months after I became a Muslim.

What was it like, confronting everyone at the Islamic center when they realized what you had once been planning?

I was actually over at [a friend's house], having dinner with them and a bunch of other members.

I said, “I really have a confession to make to each and everyone of you. And I want to apologize in the same sense, or in the sense because I consider all of you family now.” And I told them. And it hurt me to say. I actually cried when I told them.

There were a few [members] that were skeptical.

As the word got out people started saying, “Oh, OK. Now he’s on the other side."

Did you feel guilt at any point?

I live with guilt. My whole life is guilt.

How do you believe people should — and this is a big question — be treating people who hold that hatred that you used to hold?

We have to find a way to overcome that ignorance. And it’s the people who don’t live in that world anymore — or never did, or whatever — that need to lead that fight.