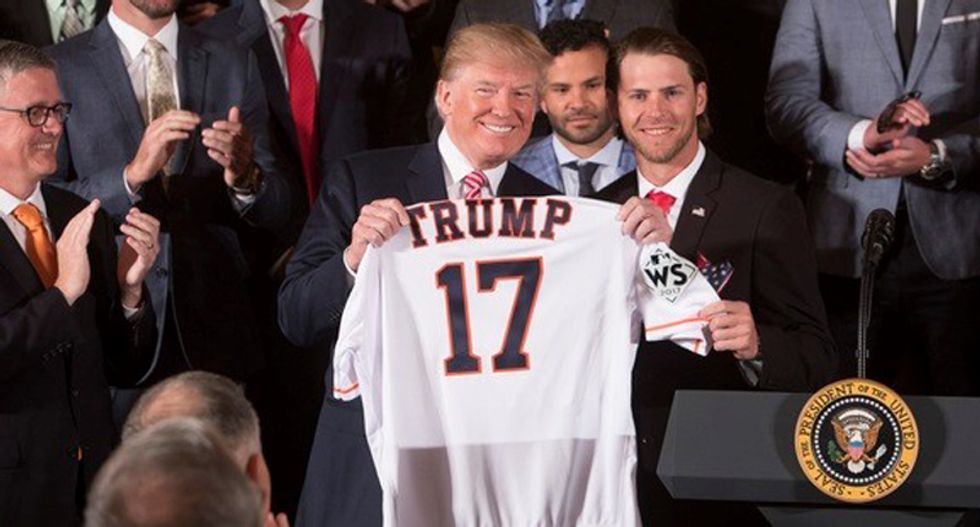 A source has told local Washington, D.C. news that the owners of the Washington Nationals wanted nothing to do with President Donald Trump, who is attending Game 5 of the World Series Sunday evening.

WUSA9 reported that the Lerner family, who owns the Nationals, asked Major League Baseball not to put them in any position to deal with Trump during the game.

"Sunday night at Nationals Park, the last home game of this glorious postseason, it's back to taking sides. It's back to....political baseball," WUSA said.

A representative of the family said that there was not a request from the president to be seated with the family of the owners, but it was clear they didn't want to be put in the position to deny the president.

There were already issues with the president attending the game. Trump was never asked to throw out the first pitch of the game, as former President Barack Obama did twice in his presidency. But Trump tweeted last week that he wouldn't do it because he would look "too heavy." Instead, one of his greatest foes, Chef José Andrés will be throwing out the first ball.

Andrés worked to help feed furloughed federal workers when Trump shut down the government for the longest stretch in history. After Trump abandoned Puerto Rico after the American island was hit by two hurricanes, Andrés arrived with supplies and food to help. He then rushed to the Bahamas after another hurricane devastated the island.

Andrés also has a complicated history with Trump, who wanted to have the chef run his restaurant at the Trump Hotel on Pennsylvania Ave. in Washington. After Trump went after immigrants, Andrés withdrew from the deal.

You can read the full report at WUSA.