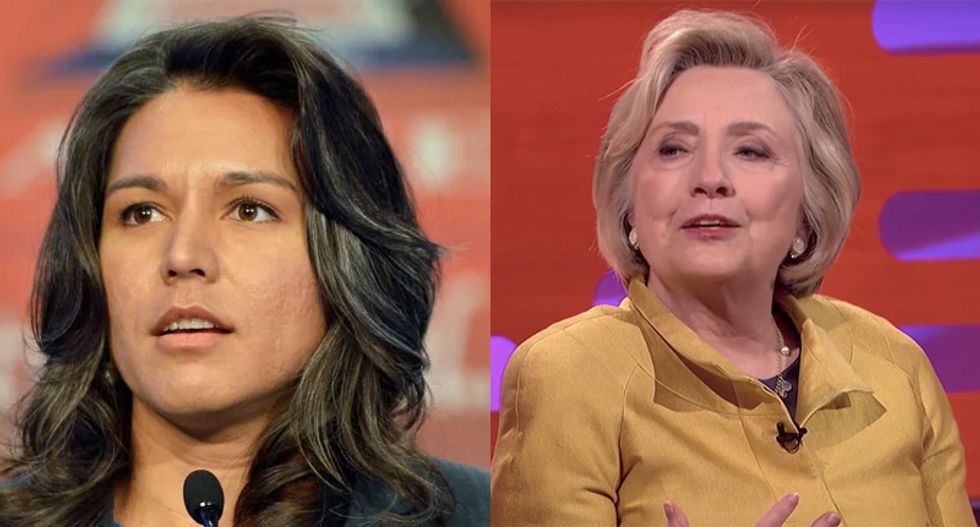 President Donald Trump has attacked former Sec. Hillary Clinton over the weekend for trying to blame Russia for everything. In fact, The New York Times story that quoted an interview with Clinton mistakenly alleged the quote. It was incorrect and The Times has fixed their error.

Clinton never said Rep. Tulsi Gabbard (D-HI) was being "groomed" by the "Russians," according to an update from The Times.

On Friday, the NYT did a piece about a podcast Secretary Clinton did with David Plouffe. They incorrectly quoted he… https://t.co/8E8DmjdK2s
— Nick Merrill (@Nick Merrill) 1571769255.0

I too am tired of talking about this, but let’s again set the record straight. HRC speculated that the only way the… https://t.co/VFoPmp6hVI
— Nick Merrill (@Nick Merrill) 1571769258.0

Other sites like NBC News and The Daily Beast correctly quoted the story.

The original piece quoted Clinton saying Russians have “got their eye on somebody who’s currently in the Democratic primary and are grooming her to be the third-party candidate."

In fact, the actual thing Clinton said was that Republicans were grooming Gabbard to be a third-party spoiler candidate in 2020.

"Hillary Clinton waded into the Democratic primary on Friday by suggesting that Russia was backing Rep. Tulsi Gabbard of Hawaii for president and that Republicans were 'grooming' her as a third-party candidate," The Times said in a corrected report (emphasis from RawStory).

“It’s now clear that this primary is between you and me,” Gabbard tweeted about Clinton. “Don’t cowardly hide behind your proxies. Join the race directly.”

In an interview with Fox News Monday, Trump used the inaccurate quote to justify diminishing the accusations of his links to Russia.