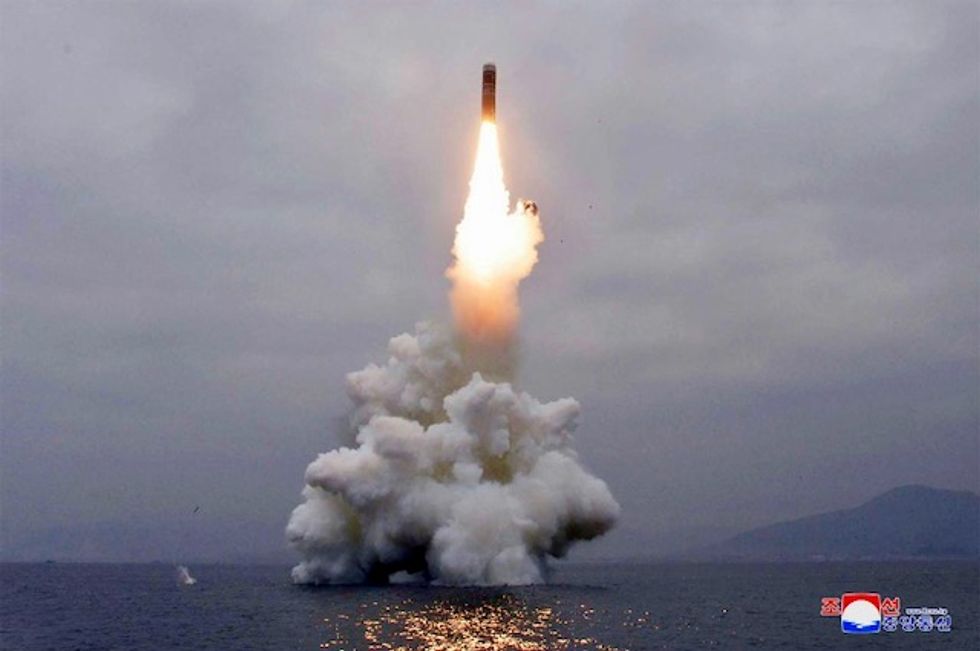 North Korea says its latest weapons test was of a submarine-launched ballistic missile that marked a "new phase" in its defense capability, just days before the resumption of stalled nuclear talks with the US.

The test was by far the most provocative since Pyongyang first began a dialogue with Washington in 2018, and marked a significant step in North Korea's nuclear weapons program, analysts said.

A proven submarine-based missile capability would take the North's arsenal to a new level, allowing deployment far beyond the Korean peninsula and a second-strike capability in the event of an attack on its military bases.

"The new-type ballistic missile was fired in vertical mode" on Wednesday in the waters off Wonsan Bay, the Korean Central News Agency (KCNA) reported, identifying the weapon as a Pukguksong-3.

"The successful new-type SLBM test-firing comes to be of great significance as it ushered in a new phase in containing the outside forces' threat," it added.

Photos carried by the official Rodong Sinmun newspaper showed a black and white missile emerging from the water and appearing to shoot into the sky.

The images also showed a small towing vessel next to the missile, which analysts said indicates the test was conducted from a submersible barge rather than an actual submarine, and that the system was in its early stages.

The North carried out a successful test of the solid-fuel Pukguksong-1, also known as KN-11, in August 2016, which flew around 500 kilometers.

KCNA VIA KNS/AFP / KCNA VIA KNS Analysts say the missile was likely launched from an underwater barge or other stationary object, not from a submarine

In July, North Korean state media had published pictures of Kim Jong Un inspecting a new type of submarine that also showed a poster of the Pukguksong-3 on a wall, fueling concerns that Pyongyang was pushing ahead with an SLBM program.

Washington voiced alarm, with a State Department spokesperson calling on Pyongyang "to refrain from provocations" and "remain engaged in substantive and sustained negotiations" aimed at bringing stability and denuclearization.

The launch came ahead of planned resumption of working-level talks between Pyongyang and Washington which is slated for later this week in an undisclosed location.

North Korea frequently couples diplomatic overtures with military moves as a way of maintaining pressure on negotiating partners, analysts say, and may believe this weapons system gives it added leverage.

Pyongyang tested what it called a "super-large" rocket launcher last month just hours after the North said was willing to resume working-level talks with Washington.

Kim Dong-yub, a researcher at the Institute for Far Eastern Studies, noted Kim's absence at Wednesday's launch -- a rarity as the North Korean leader has been present at all recent weapons tests.

"It's likely not unrelated to the talks between Pyongyang and Washington currently under way," he said, adding that Kim was trying to carry out weapons modernization without jeopardizing dialogue with the US.

Negotiations have been deadlocked since a second summit between Kim and US President Donald Trump in February ended without a deal.

The two agreed to restart dialogue during an impromptu meeting at the Demilitarized Zone dividing the two Koreas in June, but those talks have yet to materialize.

Pyongyang also carried out several weapons tests since the meeting that have been downplayed by Trump, who dismissed them as "small" and insisted his personal ties with Kim remained good.

For the first time, a Nobel Prize recognized the field of anthropology, the study of humanity. Svante Pääbo, a pioneer in the study of ancient DNA, or aDNA, was awarded the 2022 prize in physiology or medicine for his breathtaking achievements sequencing DNA extracted from ancient skeletal remains and reconstructing early humans’ genomes – that is, all the genetic information contained in one organism.

His accomplishment was once only the stuff of Jurassic Park-style science fiction. But Pääbo and many colleagues, working in large multidisciplinary teams, pieced together the genomes of our distant cousins, the famous Neanderthals and the more elusive Denisovans, whose existence was not even known until their DNA was sequenced from a tiny pinky bone of a child buried in a cave in Siberia. Thanks to interbreeding with and among these early humans, their genetic traces live on in many of us today, shaping our bodies and our disease vulnerabilities – for example, to COVID-19.

Democrats won the biggest policy battle of our time — why doesn't it feel that way?

I'm so old I can remember a time before critical race theory, Mr. Potato Head and library books about gay teenagers were the greatest threats to America. I know it's hard to believe that anything could ever be more dangerous to all we hold dear, but once upon a time millions of people were convinced that affordable health care spelled the end of the republic as we know it. They took to the streets, mobbed town hall meetings and screamed bloody murder when the government proposed a law that would ban insurance companies from refusing to cover sick people and offered government help to people who could not afford the sky-high premiums those companies charged.

It seems like ancient history now but just a few years ago the hottest, most contentious issue in America was the passage of the Affordable Care Act (also known, for better or worse, as Obamacare). The Republican Party organized itself for almost a decade solely around a promise to repeal it. In fact, they actually voted to do so 67 times over the course of seven years. As president at the time, Barack Obama would have vetoed any repeal, of course, but the act of voting against it was enough to keep the base in line, outraged and on the march from one election to the next.