On first anniversary of Tree of Life synagogue massacre, calls to confront white nationalist ideology that led to slaughter 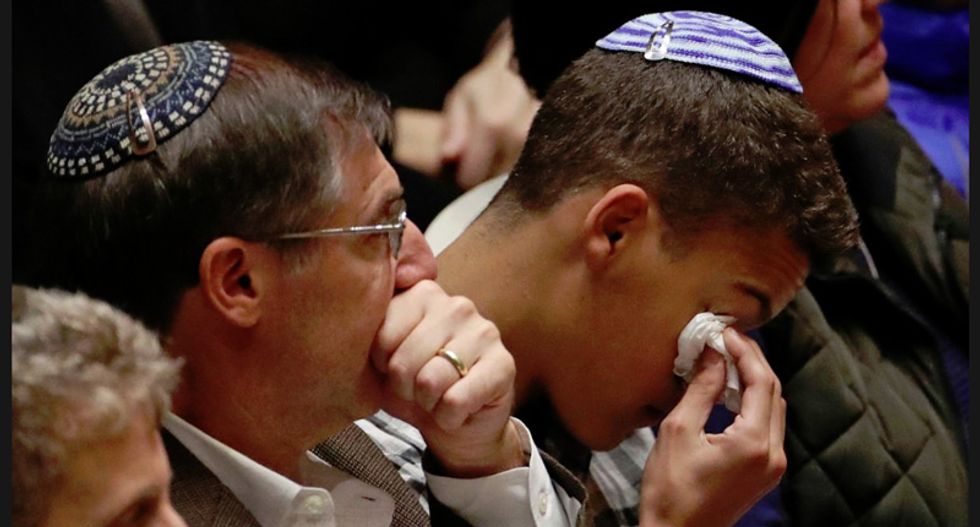 FILE PHOTO: Mourners react during a memorial service at the Sailors and Soldiers Memorial Hall of the University of Pittsburgh, a day after 11 worshippers were shot dead at a Jewish synagogue in Pittsburgh, Pennsylvania, U.S., October 28, 2018. REUTERS/Cathal McNaughton

"They were killed by white nationalism. We must commit to defeating it."

On the first anniversary of the Tree of Life massacre in Pittsburgh, activists across the U.S. called for a concerted effort to fight back against the white supremacist ideology that motivated the shooter in the attack to target the synagogue.

"They were killed by white nationalism," tweeted activist collective Bend the Arc: Jewish Action. "We must commit to defeating it."

Sen. Bernie Sanders (I-Vt.), in a tweet, echoed that message of resistance.

"Today marks one year since the massacre at the Tree of Life synagogue, the deadliest anti-Semitic attack in U.S. history," said Sanders. "We mourn for the eleven victims, and we remain committed to fighting white supremacist violence as the national security threat that it is."

On the morning of October 27, 2018 a 46-year-old white nationalist named Robert Bowers entered the Tree of Life synagogue and opened fire, killing 11 members of the congregation. The massacre led to the temporary shuttering of white supremacist-friendly social media site Gab and for a number of advocates and activists to point to President Donald Trump's rhetoric as inciteful.

"All the violence we see is the extreme and radical version of what he is implementing on a policy and legal front as president of the United States," the ACLU's Cecilia Wang said of Trump at the time.

The message of pushing back against white supremacy was on display on Sunday from a number of advocates, activists, and politicians who called for fighting the racist ideology on behalf of the victims of the synagogue shooting.

"Holding the victims and survivors in my heart today," said Rep. Ilhan Omar (D-Minn.). "We must confront the hateful ideology of white nationalism and treat it like the national security threat it is."

In a piece for yes Magazine on the massacre's anniversary, writers Ben Lorber and Tina Vasquez predicted that hateful rhetoric from the right is only going to get worse as the country nears the 2020 election.

When right-wing leaders—including elected officials and the president of the United States—voice anti-Semitic and anti-immigrant conspiracy theories, it grants these ideas legitimacy and a massive public forum, helping to create a climate that encourages White nationalist attacks on Jews, immigrants, Indigenous people, and Black and Brown people. Because of this mainstreaming, anti-Semitism has become a potent force in mainstream right-wing U.S. politics, and will likely escalate as we approach the 2020 elections. Non-White immigrants, Muslims, Black folks, other people of color, Jews, and women will also continue to be principal targets of White nationalist violence.

Jewish advocacy group IfNotNow said on Twitter that the memory of the victims could be best kept alive by anti-racist action.

"We remember them by organizing against those on the right whose antisemitic rhetoric inspired the shooter," said IfNotNow.

by
Eoin Higgins, staff writer
Guns
Report typos and corrections to: corrections@rawstory.com.
Like this article ? Text `Support` to 50123 to donate.
READ COMMENTS - JOIN THE DISCUSSION