Pelosi delivers passionate House speech on Trump impeachment inquiry: 'I don't know why Republicans are afraid of the truth' 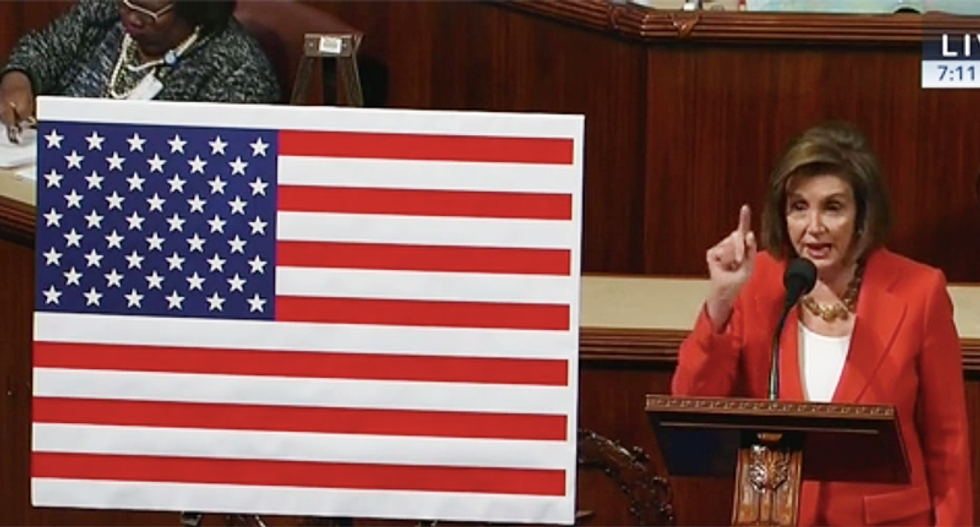 House Speaker Nancy Pelosi (D-CA) stood on the floor of the national legislature beside an American flag and in front of the wood carvings on the desks in the Well, carved with the words "justice." She read the U.S. Constitution aloud, announcing the branches of government outlined by the founding fathers and quoted the greatest thinkers of the day commenting on the special nature of America's founding.

"We gather here on that opening day with our families gathered round to proudly raise our hands to protect and defend the Constitution of the United States," Pelosi said. "That is exactly what we are doing today. Sadly this is not any cause for any comfort. This is something that is very solemn, that is something prayerful. And that we had to gather so much information to take us to this next step. Again, this is a solemn occasion. Nobody, I doubt anybody in this place, or anybody that you know, comes to Congress to take the oath of office, comes to Congress to impeach the president of the United States. His actions are jeopardizing our honoring our oath of office."

She gave a word of thanks for the committee chairs attempting to keep the proceedings and investigations organized and respected.

"This resolution ensures transparency, advancing public disclosure of depositions transcripts, and outlying the procedures for the transfer of evidence to the judiciary Committee to use in its proceedings," she explained. "It enables effective public hearings setting out procedures for the questioning of witnesses and continuing the precedent of giving the minority the same rights in questioning witnesses as the majority. Which has been true at every step of this inquiry despite what you might hear."

She then turned to talk about the nature of America and the honor leaders pledge to uphold.

"This flag, so many have fought and died for this flag, which stands for our democracy," she continued. "When Benjamin Franklin came out of Independence Hall, you heard this over and over, on September 17, 1787, the day our Constitution was adopted. He came out of Independence Hall, people said to him, 'Dr. Franklin, what do we have a monarchy or a republic?' And he said, as you know, he said, 'A republic, if we can keep it.' If we can keep it. And this Constitution is the blueprint for our republic and not a monarchy."

She noted that the president often tries to quote Article II of the Constitution to justify his ability to do anything he wants. But that defies the separation of powers, she explained, and it's not what the Constitution was ever intended to be.

"So what is at stake? Is our democracy," she went on. "What are we fighting for? Defending our democracy for the people. You know in the early days of our revolution, Thomas Paine said, 'The times have found us.' The times found our founders to declare Independence from a monarchy, to fight a war of Independence, write our founding documents and thank God they made them amendable so we can always be expanding freedom. And the genius, again that genius of that Constitution was the separation of power."

Anyone trying to usurp those powers is violating their oath of office, Pelosi said.

She also said that it's important to hold up the honor and vision of the founders who declared independence from a monarchy to establish a nation with people at its center instead. Allowing a president to unrelatedly rewrite Article II in the Constitution means that any time a president wishes, he or she can supersede the founding documents, and Pelosi said she refuses to support that.

"Again, let us honor our oath of office, let us defend our democracy, let us have a good vote today and have clarity, clarity as to how we proceed, why we proceed, and again, doing so in a way that harnesses the Constitution. We must honor the Constitution and how we do this. We must respect the institution we serve. And we must heed the further words of our founders, 'E pluribus unum' -- 'Out of many, one.' They didn't know how many we would be, or how different we would be, but they knew we needed to always be unified. Hopefully as we go forward with this, the clarity of purpose, the clarity of procedure, a clarity of fact, a clarity of truth about the truth, it's about the Constitution, we will do so in a way that brings people together that is healing rather than dividing and that is how we will honor our oath of office. I urge an aye vote and yield back the balance of my time."