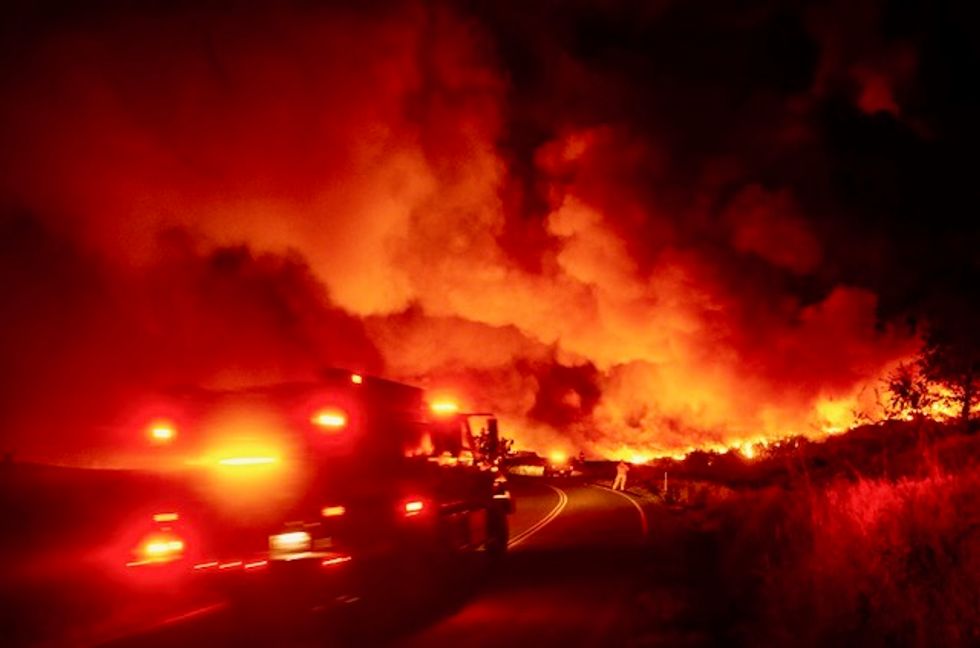 Powerful winds were fanning wildfires in northern California in "potentially historic fire" conditions, authorities said Sunday, as tens of thousands of people were ordered to evacuate and sweeping power cuts began in the US state.

Gusts of 80 miles per hour (130 kph) were fueling the Kincade blaze -- which threatens tens of thousands of structures -- causing it to burn with greater intensity in remote steep terrain north of San Francisco, the National Weather Service said.

The Sonoma County Sheriff's office early Sunday issued an evacuation warning for much of the city of Santa Rosa, which has a population of some 180,000 people.

Nearly 90,000 people were ordered to flee their homes on Saturday as the Sonoma county fire spread after breaking out midweek.

A total of 77 structures, including 31 residential buildings, had been destroyed by the blaze on Saturday, as more than 2,800 personnel were called to the scene, according to Jonathan Cox, spokesman for the California Department of Forestry and Fire Protection.

"Potentially historic fire weather conditions are possible" north of San Francisco, the US National Weather Service wrote in a tweet.

"This is definitely an event that we're calling historic and extreme," David King, a meteorologist with the service, told The Los Angeles Times.

"What's making this event really substantial... is the amount of time that these winds are going to remain."

The gusting winds, which have caused a red flag warning indicating a high risk level, will last into early Monday, meteorologists said.

A map linked to by PG&E showed blackouts affecting large areas stretching some 250 miles (430 km) to the north of San Francisco Sunday, as well as to the south and east.

The company said it "will need to turn off power for safety several hours before the potentially damaging winds arrive."

"Winds of this magnitude pose a higher risk of damage and sparks on the electric system and rapid wildfire spread."

"I can't explain it," 70-year-old Tina Tavares, who was evacuated from her Geyserville home, told the San Francisco Chronicle.

"It's like you're in a bad earthquake, the ground is opening up... and you're seeing it and don't know what to do."

PG&E has come under fierce scrutiny after power was earlier shut down to nearly 28,000 customers in Sonoma County this week, but some high-voltage transmission lines were still operating when the fire broke out.

The same type of line was responsible for California's deadliest wildfire ever -- last year's Camp Fire, which killed 86 people.

California Governor Gavin Newsom declared a state of emergency and hit out at the company on Friday, saying it had put "profits over the people of California for too long."

He said it was "infuriating beyond words" that a state such as California had to endure blackouts.

"It's about dog-eat-dog capitalism meeting climate change," he said, referring to PG&E. "It's a story about greed, and they need to be held accountable."

Farther south in California, most evacuation orders were lifted after tens of thousands of residents left their homes near Santa Clarita, just north of Los Angeles, due to the so-called Tick Fire that scorched over 4,000 acres.

Officials said Saturday that human remains were found in the burn area, but that authorities had determined the death had not been caused by the fire, according to the Los Angeles Times.

The blaze forced the shutdown of all schools in the area as well as a major freeway, creating traffic chaos for commuters.

Some 1,325 firefighters backed by air tankers and helicopters had battled the flames close to densely packed communities.

Wildfires also erupted over the border in Mexico's Baja California state, where local civil protection authorities said on Friday that three people had been killed and more than 150 homes destroyed.

The state's director of civil protection, Antonio Rosquillas, said the municipality of Tecate, bordering the United States, was the worst hit.