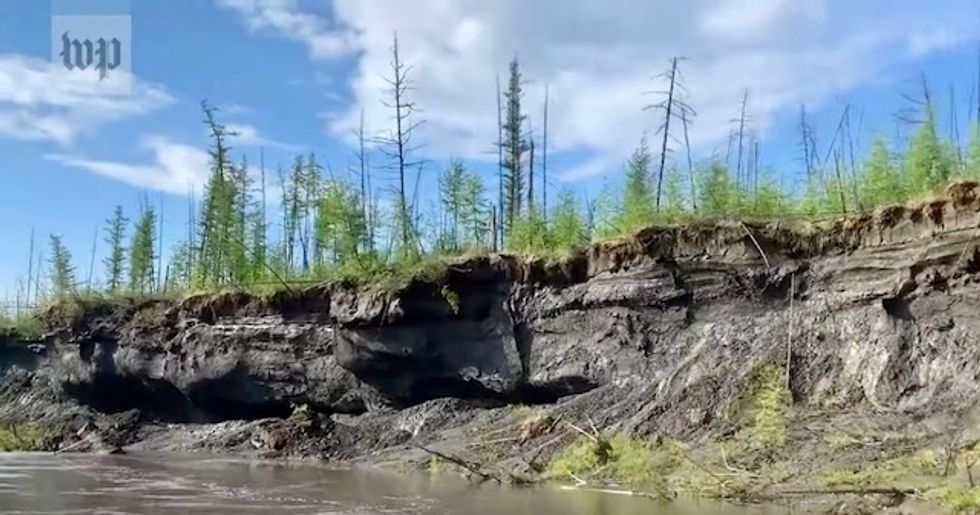 "Rivers are rising and running faster, and entire neighborhoods are falling into them."

The latest installment in a Washington Post series on "hot zones" around the world that are already enduring "extreme climate change" focuses on the federal Russian republic in eastern Siberia called Yakutia, part of which "has warmed by more than 3 degrees Celsius since preindustrial times—roughly triple the global average."

Rising global temperatures from human activity are causing the world's permafrost—a mix of soil, rocks, and sand that remains frozen for two or more consecutive years—to thaw and release greenhouse gases such as carbon dioxide, methane, and nitrous oxide into the atmosphere, further warming the planet.

In Siberia, according to the Post, "the permafrost that once sustained farming—and upon which villages and cities are built—is in the midst of a great thaw, blanketing the region with swamps, lakes, and odd bubbles of earth that render the land virtually useless."

The report, entitled "Radical Warming in Siberia Leaves Millions on Unstable Ground," was published Thursday as part of the newspaper's "2°C: Beyond the Limit" series.

Although there are global implications for thawing permafrost, "this story is about what is happening locally," Mooney wrote, "which is also very stunning and dramatic."

Mooney and Troianovski, in their report, outlined some of the regional results of permafrost thaw:

For the 5.4 million people who live in Russia's permafrost zone, the new climate has disrupted their homes and their livelihoods. Rivers are rising and running faster, and entire neighborhoods are falling into them. Arable land for farming has plummeted by more than half, to just 120,000 acres in 2017.

In Yakutia, an area one-third the size of the United States, cattle and reindeer herding have plunged 20 percent as the animals increasingly battle to survive the warming climate's destruction of pastureland.

The thawing has helped fuel "migration from the countryside to cities and towns," they reported. The population of Yakutsk, the republic's capital city, has soared 20 percent in the past decade, but it "offers no escape from the warming climate."

"As the permafrost thaws and recedes, a handful of apartment buildings there are showing signs of structural problems," Mooney and Troianovski explained. "Sections of many older, wooden buildings already sag toward the ground—rendered uninhabitable by the unevenly thawing earth. New apartment blocks are being built on massive pylons extending ever deeper—more than 40 feet—below ground."

The thawing also has led to a "rotting smell" that comes from decomposing animals and plants that were previously frozen for thousands of years. "Against this backdrop, a booming cottage industry in mammoth hunting has taken hold," as locals seek out tusks to cash in on international demand for ivory.

16. The story also follows would-be mammoth hunters who are seizing on the opportunity presented by the rapidly tha… https://t.co/WagsZrYexC
— Chris Mooney (@Chris Mooney) 1570198994.0

Yakutia's permafrost is notable both because of its construction and the potential consequences of its continued thaw. As Mooney and Troianovski explained:

In some parts of the world, permafrost lies in a relatively thin layer just below the ground's surface. But in much of Yakutia, the permafrost is of a special, icy and far thicker variety. Scientists call it Yedoma.

Formed during the late Pleistocene, the Earth's last glacial period, which ended about 11,700 years ago, Yedoma consists of thick layers of soil packed around gigantic lodes of embedded ice. Because Yedoma contains so much ice, it can melt quickly—reshaping the landscape as sudden lakes form and hillsides collapse.

Scientists estimate that the Earth's Yedoma regions contain between 327 billion and 466 billion tons of carbon. Were it all released into the atmosphere, that would amount to more than half of all human-caused emissions from greenhouse gases and deforestation between 1750 and 2011.

The Post report's photos and videos, by Michael Robinson Chavez, include a brief breakdown of Siberia's Yedoma permafrost and scientists concerns. Watch:

The Post's look at permafrost thaw in eastern Siberia was published about a week after a new report from the United Nations Intergovernmental Panel on Climate Change (IPCC) that focused on the ocean and cryosphere, which refers to the world's frozen zones, including permafrost.

Noting that more than half of Russia's territory is located in the cryosphere, The Moscow Times on Thusday highlighted some of the IPCC's findings for the country's permafrost:

Permafrost will thaw fastest in Siberian cities such as Vorkuta, Chita, Ulan-Ude, and Petropavlovsk-Kamchatsky, said Alexei Yekaikin, a scientist from the Arctic and Antarctic Research Institute and one of the IPCC report's authors.

"By the end of the 21st century, permafrost borders will move further north and will reach Yakutsk, Magadan, and Igarka," the expert told the state-run RIA Novosti news agency Wednesday.

The IPCC's broader findings, as Common Dreams reported when they were released last week, underscored the necessity of pursuing "unprecedented transitions in all aspects of society" to sustain life on Earth.