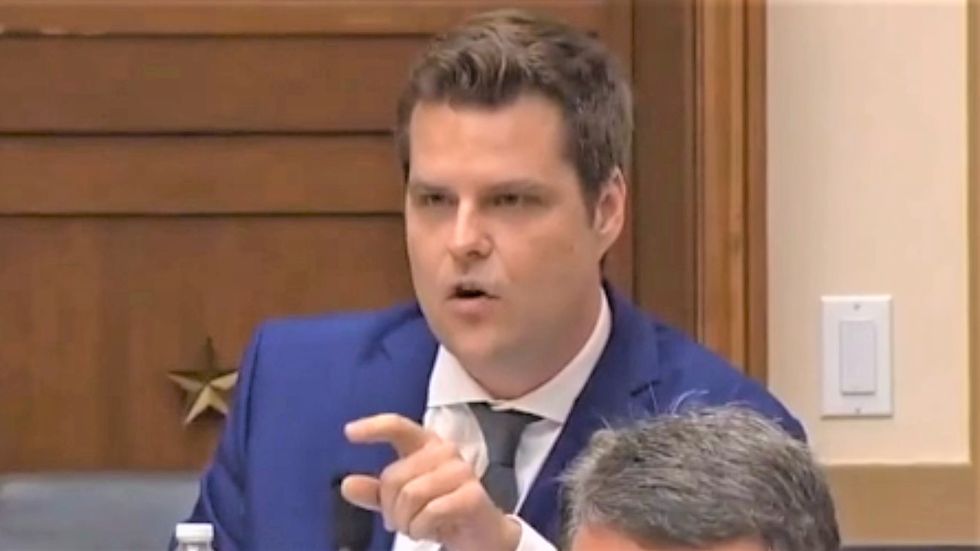 Nate Kalmoe, an assistant professor of political communication at Louisiana State University and an expert on political violence, explained to me in 2017 that regardless of whether people lean right or left, those whose ideological positions are at least in the neighborhood of the mainstream tend to “have a greater commitment to nonviolent approaches to politics" than those on the fringes because they "are socialized into nonviolent norms of how participation is supposed to work.”

Kalmoe is one of a number of scholars whose research has found that violent political rhetoric can incite violence by people who already have aggressive personality traits. But the connection between embracing a conspiratorial view of how the world works and political violence is less well understood.

Intuitively, if you are a maladjusted person who believes that dark, unseen forces are arrayed against you and your political tribe, it would make you more likely to reject "nonviolent norms of how participation is supposed to work." If the game is rigged, and normal politics are just a sham, you may well be inclined to take matters into your own hands.

Donald Trump is an unlikely conspiracy theorist. It's hard to understand how someone who became a millionaire at age 8 and has never been told "no" could think that the world is against him, but he has relentlessly mainstreamed and validated what once would have been fringe conspiracy theories--first as a dedicated Birther and since his election as the top salesman for a sprawling storyline about the "Deep State" conspiring to undermine him at every turn.

The "paranoid style" in American politics, as historian Richard Hofstadter referred to it, is not new. He wrote about it in 1964. What is new is the president* of the United States indulging in it publicly every day. Grievance politics mingled with Infowars-style nonsense has become ubiquitous under Trump. It motivated this week's ludicrous incursion into a deposition being run by members of both parties by Republicans who claimed that Democrats were shutting them out of the process--even though over a dozen of those same members were on the relevant committees holding the proceeding and were welcome to participate. It is fueling talk on the right of coup d'etats and murmurs about a brewing civil war.

The reality is that Republicans enjoy tons of power. They hold 61 of the country's 99 state legislative chambers--and have unified control of half of state governments. They control the federal judiciary, from the Supreme Court down. They control the United States Senate and have an electoral advantage in the House. Their lobbying groups and think tanks are robust and well-funded. Most corporate boards skew to the right. The country's top-rated cable "news" channel, which is entirely dedicated to advancing the Republican agenda, sits at the top of a vast conservative media infrastructure, while the mainstream press adheres to journalistic norms that require offering the perspectives of "both sides."

That's the real world. It is one in which a Republican voter's participation in our democracy pays off handsomely and is well worth his or her time.  But that same voter is bombarded with the message that they can never catch a break. When a judge rules against their party, that jurist is by definition a liberal "robed tyrant." Reporting they don't like is fake news contrived by dishonest journalists bent on destroying their movement. When a Democrat wins an election, it can only be a result of voter fraud. And when Democrats win the House in a landslide and exercise their Constitutional power, it is a coup.

Presumably, most elected officials understand the reality and employ this rhetoric in a cynical effort to fire up the base and elicit contributions. But they're playing a dangerous game. While most people are socialized to find political violence abhorrent, it only takes one angry, unstable person to commit an act of terror.

Donald Trump and his movement will continue to ratchet up their grievance--based arguments as House Democrats gather more evidence against him and his associates. If he loses next year, he will blame the Deep State and claim that the election was stolen. It is very likely that we will face at least some scattered "lone-wolf" attacks as a result. Trump's rhetoric is a defense mechanism that allows him to tell himself that he's a winner even when he loses. It's dangerous, and he's shown that he's incapable of acknowledging that it comes with consequences--like the "MAGA Bomber's" campaign against his enemies--or caring about the bloodshed that his brand of conspiracism has already caused.

Alternet All Access Opinion
Please contact support@rawstory.com for customer support or to update your subscription. Report typos and corrections to: corrections@rawstory.com.