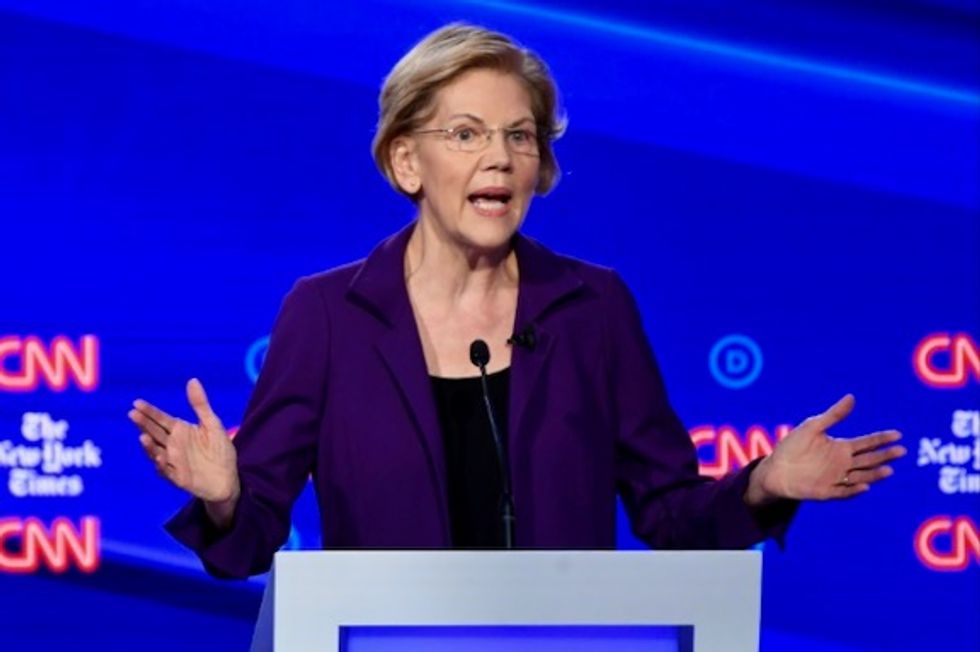 Surging White House hopeful Elizabeth Warren faced a barrage of attacks from fellow Democrats at the party's fourth 2020 debate Tuesday, cementing her status as a frontrunner in the race to challenge Donald Trump.

The president himself loomed large as the dozen Democratic contenders trained their fire on him, calling for his impeachment and assailing a Syria troop pullout that Joe Biden slammed as "shameful."

"The impeachment must go forward," thundered Warren, the progressive senator who is neck and neck with former vice president Biden at the head of the 2020 nomination race -- a stance loudly echoed by her fellow Democrats on stage.

Washington's impeachment brawl has dominated US politics for weeks, centered on Trump's effort to press Ukraine to dig up dirt on Biden.

Dragged into the scandal, Biden made clear he believes Trump should be impeached -- and pushed back hard on the president's charge he himself intervened in Ukraine to protect his son Hunter.

"My son did nothing wrong. I did nothing wrong," Biden said, when asked about his son's employment with a Ukrainian company, which even some Democrats say held the appearance of a conflict of interest.

The Ukraine scandal thrust Biden into the spotlight, while 78-year-old liberal Senator Bernie Sanders -- the other heavyweight in the race -- was under pressure to project fortitude two weeks after being sidelined by a mild heart attack.

But it was Warren who weathered the sharpest attacks from her fellow Democrats -- on everything from kitchen-sink issues such as healthcare and taxation, to foreign policy and even business automation.

On health -- a flashpoint issue for American voters -- Warren faced stiff blowback from moderates who challenged her to come clean on how much her "Medicare for All" plan would cost.

"The difference between a plan and a pipe dream is something that you can actually get done," said Senator Amy Klobuchar, while Biden called Warren's health policy "vague."

Ex-congressman Beto O'Rourke accused Warren -- who advocates a wealth tax on the biggest fortunes -- of "punitive" policies, and "pitting some part of the country against the other."

Warren stood out in calling for the United States to "get out of the Middle East" -- while most of her rivals focused on assailing Trump's decision to pull US troops out of northern Syria, which critics say amounted to a green light for a Turkish assault on America's Kurdish allies there.

"This is shameful, shameful what this man has done," Biden said of Trump's Syria pullout, while Senator Kamala Harris said she would "stop this madness" if elected.

With the candidates in broad agreement on their opposition to Trump -- as well as on such issues as the opioid crisis and income inequality -- much of the back-and-forth was about performance rather than substance.

And South Bend Mayor Pete Buttigieg, whose numbers are improving in early voting states like Iowa, repeatedly grabbed the limelight by clashing with rivals on everything from foreign policy, to health care to gun control.

When O'Rourke told Buttigieg it was time to ignore polls and be bold about buying back millions of assault weapons, Buttigieg snapped back: "I don't need lessons from you on courage, political or personal."

With 12 candidates on stage, including billionaire activist Tom Steyer who was making his debate debut, each struggled to get heard.

Entrepreneur Andrew Yang warned candidates must not forget the economic disillusionment that paved the way for Trump's 2016 victory.

"When we talk about him, we are losing," he said, noting the dramatic manufacturing job losses in battleground states like Ohio.

"These are the problems that got Donald Trump elected," Yang said.

With the three frontrunners in their seventies, moderators confronted them directly on the sensitive subject of age.

Asked if he were healthy enough for a year-long race after his heart attack, Sanders insisted he will mount a "vigorous" campaign to "reassure" voters -- while teasing a high-profile endorsement to come, which US media said was from star congresswoman Alexandria Ocasio-Cortez.

Biden, 76, said his age and vast experience was an asset. "With it comes wisdom," he said.

Warren for her part said she would "outwork, out-organize, and outlast anyone, and that includes Donald Trump, (vice president) Mike Pence, or whoever the Republicans get stuck with."