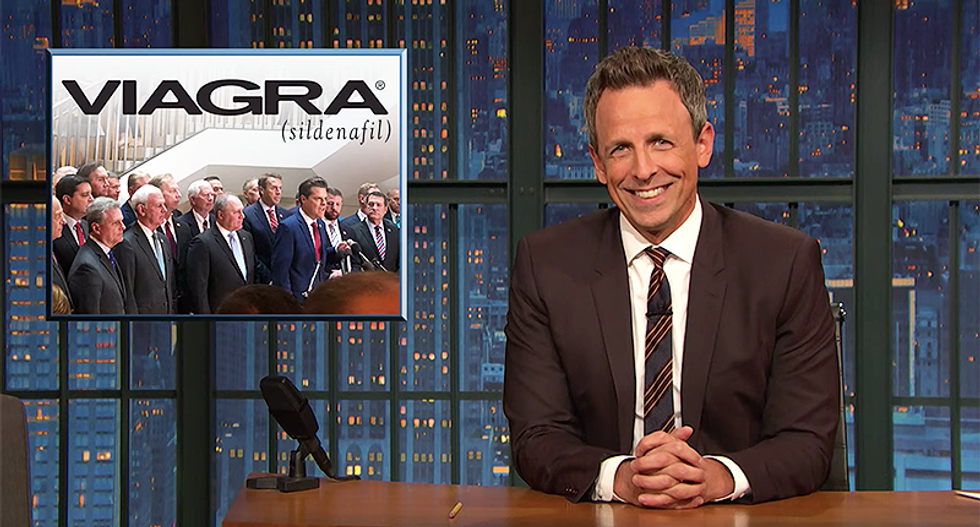 "Late Night" comedian Seth Meyers couldn't help but lambast the far-right Republicans angry that they're not being included in the depositions ahead of the impeachment hearings.

Wednesday, Republicans stormed a secure room known as a SCIF (Sensitive Compartmented Information Facility), because they seemed to misunderstand the difference between a deposition and a hearing. In Congressional hearings, witnesses will be presented for members of the committee to question. In a classified deposition, the witness can give information that is considered classified for security reasons. Oddly, some members who are allowed in the room were also protesting.

Rep. Eric Swalwell (D-CA) told MSNBC Wednesday that many of the Republicans show up and throw out political questions and posture before walking out and refusing to participate in the actual deposition. He was confused as to why they didn't simply show up and stay if they were so intent on being in the deposition.

The whole ordeal prompted Meyers to compare it to a protest outside of a pharmacy that ran out of Viagra. The angry, white, middle-aged men stood around the podium like they're about to demand their outdated coupon be used for their new boat shoes. Or that they're irate Dick's is out of red fishing lures.

"I haven't seen a group of white guys so angry since they found out their tickets to Don Henley are obstructed view," Meyers quipped. "Looks like a protest outside a pharmacy that ran out of Viagra. They shouldn't be at the Capital; they should be standing at a counter at McDonald's demanding to see the manager."

Meanwhile, Trump and his team are confessing to all of the things they're accused of and not realizing they're doing it. Meyers did a super-cut showing how his White House has gone so quickly from denial to admission. Still, however, they maintain there's nothing unconstitutional about bribery.