Seth Meyers: Trump's presser was like 'a rabid groundhog popped out to predict 6 more weeks of word vomit' 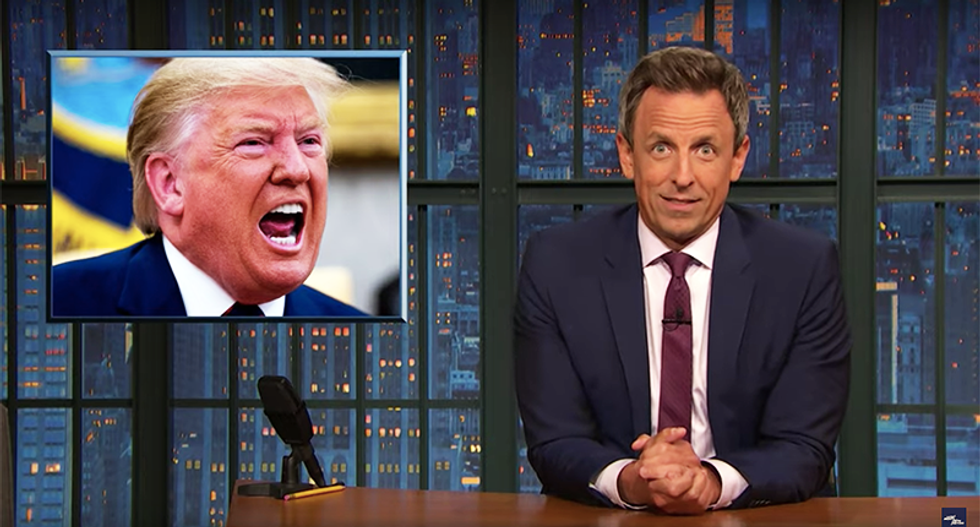 While Fox News is spinning the claim that impeaching President Donald Trump takes away from governing, comedian Seth Meyers noted that Trump was more occupied with figuring out how many snakes or gators he could stick in a moat on the U.S.-Mexico border.

"This is how insane this is: his aides had to go out and get a cost estimate for this plan," Meyers said during his Wednesday show. "How do you even do that? Walk over to the reptile section of the PetSmart with a map of the border and be like, 'I don't know. Can I get a billion snakes?' Now, I don't want you to worry that this snake-filled moat thing is occupying too much of the president's time, because he has moved on to other topics. For example: President Caligula over here is also arguing that impeaching him would cause a civil war."

Meyers showed clips of Trump's recent rant that Democrats were trying to stage a coup d’état, which doesn't exactly make sense because the impeachment rules are outlined in the Constitution.

The true question on many minds in America is how the president is holding up, Meyers joked.

"Judging from the press conference he had in the Oval Office today, I'd say he's handling it pretty well," Meyers said before showing Trump ranting against Rep. Adam Schiff (D-CA). In the lower right-hand corner of the screen, the more Trump ranted the more the Dow Jones stock numbers fell.

The final quote Meyers played was that something "happened in 2016 is a disgrace to this country."

"Well, that I agree with," Meyers said. "I mean, some crazy guy lost the popular vote and fell ass-backward in the presidency and now the news has to run chyrons with the words, and this is real, 'Trump denies wanting snakes, gators, spikes on border.' I cannot express to you enough how deeply off the rails Trump's performance was today."

He showed a photo taken from the press event with the president red-faced and screaming.

"Look at that, he looks like a rabid groundhog that just popped out of his hole and predicted six more weeks of word vomit," Meyers joked.