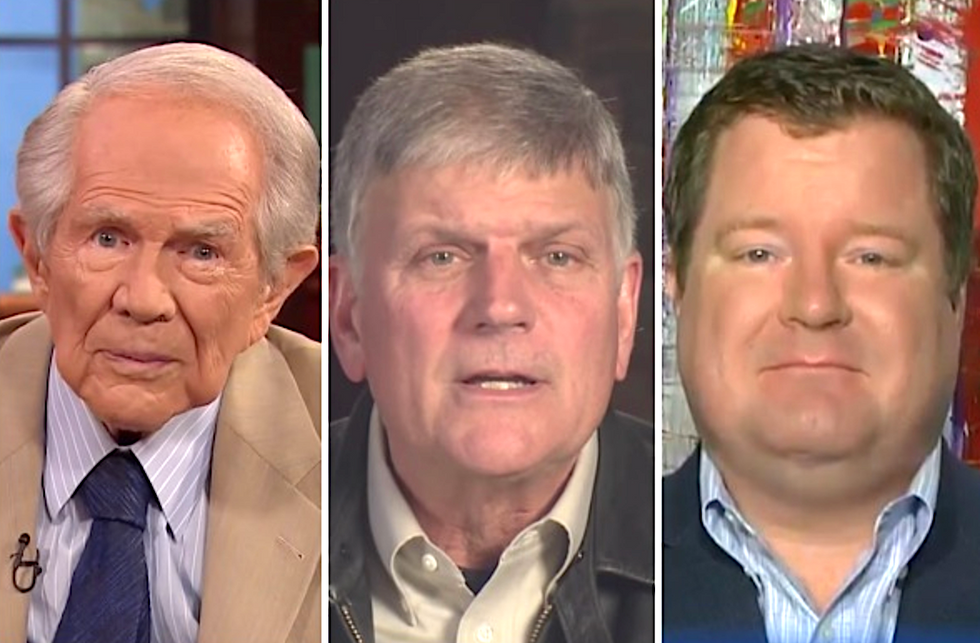 While evangelical support for President Trump has been immovable, cracks are beginning to show in the wake of his decision to withdraw a contingent of troops from northeast Syria, effectively allowing Turkey to launch attacks on the US's Kurdish allies while emboldening Iran.

The first notable evangelical voice to break with Trump over the matter was televangelist and 700 Club host Pat Robertson, who earlier this week said that he was "appalled" by the decision.

“Ladies and gentlemen I want to say right now,” Robertson declared in a video clip flagged by Right Wing Watch. “I am absolutely appalled that the United States is gonna betray those democratic forces in northern Syria, that we’re possibly gonna allow the Turks to come in against the Kurds.

Another evangelical powerhouse to speak out was Franklin Graham, who call on Trump to "reconsider" the pullout.

"TODAY I ask that you join me in praying for the lives affected by the White House decision to pull U.S. troops out of northern Syria," Graham tweeted on Wednesday. "Both Democrat & Republican leaders are deeply concerned bc this would be, in essence, abandoning our closest allies there — the Kurdish people."

"Also pray for the Christians who the Kurds have been protecting. They could be annihilated," he added.

Evangelical radio host, pundit, and blogger Erick Erickson tweeted out a message to House Speaker Nancy Pelosi this Wednesday, asking her to "maybe do a vote to initiate impeachment STAT, have the committee get out articles by tonight and over to the Senate, and perhaps we'll still have time to save some of the Kurds."

As the chorus of dissent continues to grow, it remains to be seen if it has any effect on the 80 percent of white evangelical support Trump used to surge to the presidency in 2016. Evangelicals lauded Trump as being a protector of persecuted Christians around the world. Now, his perceived abandonment of Christian communities in northern Syria has stained that image, at least in the eyes of some of his religiously conservative supporters.