Sondland is done trying to defend Trump after he was outed by Ukraine ambassador: associate 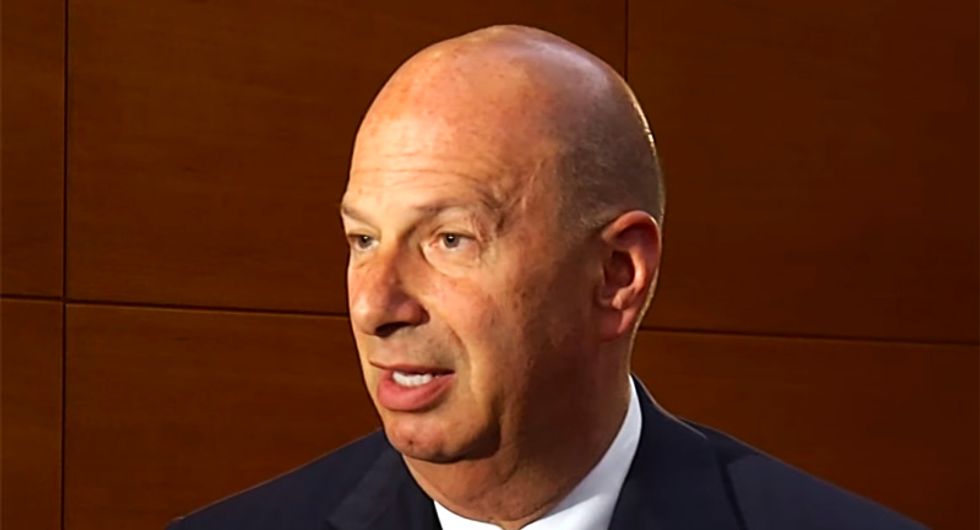 Politico wrote Wednesday that it was Taylor who raised questions about whether Trump confessed to withholding military aid in exchange for an international investigation of Trump's political rivals.

"Yet an associate familiar with Sondland’s thinking argues the U.S. ambassador to the E.U. and Taylor are more closely aligned than it appears about what occurred and pushed back against Democrats, who suggested Tuesday that Sondland may need to return to Capitol Hill and clarify his remarks," said Politico.

The associate explained that Taylor and Sondland spent times discussing Trump's motivations, but never came to any specific conclusions. Sondland also claimed that he didn't know the gas company Burisma was a way of saying an investigation into Joe Biden's son.

"The comments underscore Sondland’s eagerness to draw a line between himself and the president in the rapidly-unfolding scandal," wrote Politico.

“It appears that Sondland … and Taylor disagree only on whether Sondland knew that there was a linkage in aid,” the Sondland associate said to the site. “On all other points (that they wanted the aid restored, wanted a WH visit for [Ukrainian President Volodymyr] Zelensky, didn’t want to have to deal with Rudy [Giuliani], etc.) they are aligned.”

“I think Sondland would say that, like everyone, they speculated about the aid linkage, but never knew,” continued the associate. “No one, least of all Taylor, suggests that Sondland had any role in the aid cutoff; the only question is whether Sondland had heard that from Trump (or [Kurt] Volker or [Rudy] Giuliani).”

The associate also said that Sondland personally admitted that one piece of the quid pro quo Trump demanded of Zelensky was that he would allow a meeting between the two if he spoke on camera about the investigation into Biden. According to Bill Taylor's opening statement, the goal was to box Zelensky into a situation where Trump could use the video.

The associate said even if Sondland knew all of Trump's intentions he would have only been "a witness" but not a participant of the bribery.

“No one is suggesting that he was anything other than opposed to the aid cutoff, and he told the committee that he thought linking the two would be wrong. Less here than meets the eye, is my only point," the associate said. “The points in common between Taylor and Sondland (and also Volker) are far more important than the points of difference."

Taylor raised many questions with his testimony about the truthfulness of Sondland's information. The House committee now wants to call Sondland again to answer for clarification of his testimony given what they now know from Taylor. There were multiple occasions where he replied "I cannot recall," about specifics that Taylor outlined. "Some lawmakers even suggested that Sondland perjured himself," the Politico report said.

“During that phone call, Ambassador Sondland told me that President Trump had told him that he wants President Zelensky to state publicly that Ukraine will investigate Burisma and alleged Ukrainian interference in the 2016 U. S. election,” Taylor told the committee.