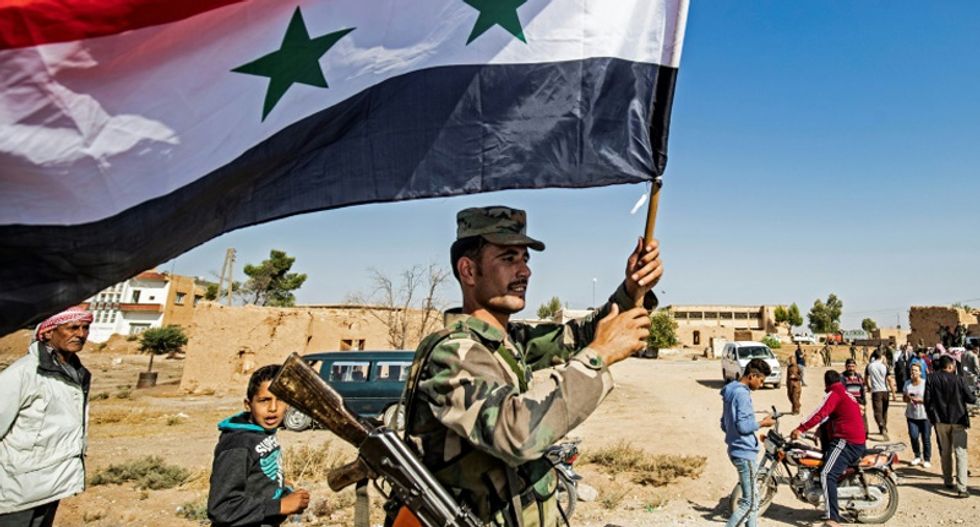 A Syrian regime soldier waves the national flag in the town of Tal Tamr as Damascus deploys forces towards the Turkish border. (AFP / Delil SOULEIMAN)

The Syrian regime sent troops towards the Turkish border Monday to contain Ankara's deadly offensive against the Kurds, stepping in for US forces due to begin a controversial withdrawal.

The Syrian army has maintained a presence in the Kurdish-controlled cities of Qamishli and Hasakeh in Syria's northeast since the start of the war, and deployed a limited number of troops around the key city of Manbij in 2018 at the request of Kurdish forces to shield the area from a feared Turkish assault.

But their latest deployment is the first major dispatch of troops to Kurdish-controlled territory since Damascus started withdrawing from the northeast in 2012.

Outgunned and without US protection, the autonomous Kurds had few other options to stop the rapid advance of Turkish troops and their Syrian proxies.

Turkey wants to create a roughly 30-kilometre (20-mile) buffer zone along its border to keep Kurdish forces at bay and also to send back some of the 3.6 million Syrian refugees it hosts.

The United States and its partners, who spent years fighting alongside the Kurds against the Islamic State group in Syria before deserting them, have condemned the Turkish invasion, but their threats of sanctions have failed to stop it.

Washington says it is planning to pull out 1,000 troops -- almost the entire ground force -- from Syria's north, in a move welcomed by Turkish President Recep Tayyip Erdogan as "a positive approach".

A US official told AFP Washington is "executing the order" to withdraw, but did not provide additional details.

Without US protection, France said it may also be forced to pull its troops from a global coalition fighting IS in the country.

The chaos in the areas targeted in the six-day-old Turkish assault has already led to the escape of around 800 foreign women and children linked to IS from a Kurdish-run camp, Kurdish authorities said.

The Kurds had repeatedly warned of that scenario when Western countries refused to repatriate their IS-linked nationals and when Trump made it clear he wanted to end the US military presence.

On Monday Trump said the Kurds "may be releasing" IS prisoners to keep the US involved and Turkey accused Kurdish forces of deliberately freeing jihadists to "fuel chaos".

Wasting no time to fill the void, Moscow -- the top broker in Syria -- clinched a deal between the Kurds and Damascus, whose ties had been icy since the minority threw its lot with Washington and unilaterally declared self-rule.

"In order to prevent and confront this aggression, an agreement has been reached with the Syrian government," the Kurdish administration said late Sunday.

The head of the main Kurdish force wrote in Foreign Policy magazine: "If we have to choose between compromises and the genocide of our people, we will surely choose life for our people."

By Monday morning, Syrian regime forces were moving to within several kilometres (miles) of the border, AFP correspondents reported.

Residents around the town of Tal Tamr welcomed them with cheers and Syrian state television showed some waving national flags and portraits of President Bashar al-Assad.

Syrian troops also deployed in the areas of Tabqa and Ain Issa in the northern province of Raqa, said the Syrian Observatory for Human Rights, a Britain-based war monitor.

A newspaper close to the Damascus regime said Syrian forces were also expected to deploy in the areas of Manbij and the border town of Kobane.

Ankara's Syrian proxies on Monday massed in rural areas west of Manbij in preparation for an assault, an AFP correspondent there said.

The main remaining flashpoint along the border was the town of Ras al-Ain, where Kurdish-led Syrian Democratic Forces (SDF) have been putting up stiff resistance against the Turkish assault.

"There is a large tunnel network under the town" said Abou Bassam, a Syrian rebel commander fighting with Ankara's forces, adding that the SDF were moving "swiftly".

According to Observatory, the Turkish attack has already left 133 SDF fighters and 69 civilians dead.

The United Nations says 160,000 people have been displaced.

On the Turkish side, four soldiers and 18 civilians have been killed in six days, either in fighting or from Kurdish cross-border fire, according to Turkish sources.

The Observatory put the number of pro-Turkish Syrian forces killed at 108.

An internal document circulated Monday by the Kurdish administration, a copy of which was obtained by AFP, stressed the deal with Damascus was purely of a military nature and did not affect the work of the semi-autonomous institutions.

But the de-facto statelet the Kurds have set up in northeastern Syria has fast unravelled in recent days, with their forces losing control of a 120-kilometre-long segment of the border.

The area that is now under the control of Turkey and its proxies is ethnically Arab-dominated.

Kurdish officials and residents have expressed outrage at what they call a US betrayal that shortchanges the sacrifices made in the fight against IS.

Since 2014, the SDF have been the US-led anti-IS coalition's main partner on the ground in Syria, spearheading some key battles on the way to eliminating the jihadists' self-proclaimed "caliphate" earlier this year.