'Tacit endorsement of violence': White House has yet to condemn edited video showing Trump gunning down media and political opponents 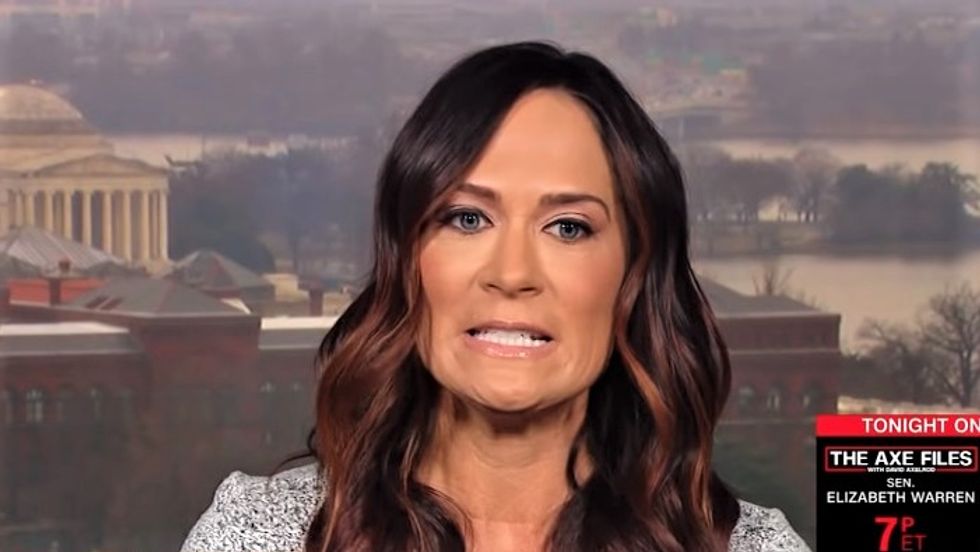 An edited video depicting President Donald Trump gunning down his political opponents and the media inside a church was reportedly played to a conference of his supporters last week at the Trump National Doral Golf Resort in Miami, drawing outrage from journalists and others who condemned the clip as a blatant incitement to violence.

The New York Times, which obtained footage of the clip being shown at the pro-Trump conference, reported late Sunday that the video "shows Mr. Trump's head superimposed on the body of a man opening fire inside the 'Church of Fake News' on parishioners who have the faces of his critics or the logos of media organizations superimposed on their bodies."

The video is an edited scene from the 2014 film "Kingsman: The Secret Service" and contains a logo for Trump's 2020 reelection campaign.

As of this writing, Trump has yet to condemn the video. The president's son Donald Trump Jr. and former White House press secretary Sarah Huckabee Sanders told the Times they did not see the video played at the conference.

Watch the video, which apparently originated from the right-wing account "TheGeekzTeam":

This video making the rounds that was shown at mar-a-lago of Trump killing all his critics is so evil and irrespons… https://t.co/erhLWBliL3
— Justin Kanew (@Justin Kanew) 1571019529.0

"This video is racist and hateful," said Watts, "and it's flabbergasting that it was shown at Trump's resort."

The video of a mass shooting by the President inside a church is reminiscent of the Charleston shooting. Executing… https://t.co/DD21z04rOC
— Shannon Watts (@Shannon Watts) 1571022194.0

In a statement, CNN said "this is not the first time that supporters of the president have promoted violence against the media in a video they apparently find entertaining—but it is far and away the worst."

"The images depicted are vile and horrific," said CNN. "The president and his family, the White House, and the Trump campaign need to denounce it immediately in the strongest possible terms. Anything less equates to a tacit endorsement of violence and should not be tolerated by anyone."

"All Americans should condemn this depiction of violence directed toward journalists and the president's political opponents," Karl said in a statement late Sunday. "We have previously told the president his rhetoric could incite violence. Now we call on him and everybody associated with this conference to denounce this video and affirm that violence has no place in our society."

Sylvester Stallone thrilled QAnon cultists by wearing a hat with the letter "Q" on it and using a phrase associated with the right-wing conspiracy theory.

The Oscar nominated actor uploaded the photo to Instagram showing himself wearing the hat and seated on a plane, with the caption, "Heading into the storm," and QAnon adherents took the post as a sign of his endorsement, reported Newsweek.

Next up on GOP’s agenda: Stripping women of political and economic power

In about six months, women in thirty Republican-controlled states will probably lose their right to get an abortion.

The Supreme Court and the Constitution don't “grant” or “give” Americans rights: they recognize rights and define the extent to which they can be infringed upon by our government, theoretically balancing private rights against the public good.