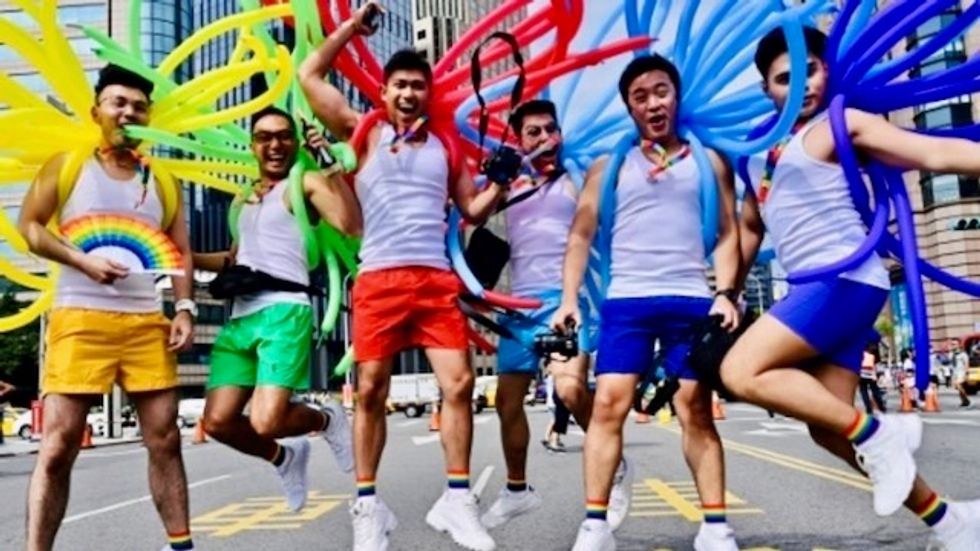 Nearly two hundred thousand revellers marched through Taipei in a riot of rainbow colours and celebration on Saturday as Taiwan held its first pride parade since making history in Asia by legalising gay marriage.

The island has long hosted the region's largest pride marches but this year Taiwan's LGBT community and their supporters had an extra reason to celebrate.

In May, lawmakers took the unprecedented decision to legalise same sex marriages, becoming the first place in Asia to do so.

Over 2,000 couples have since wed, many of them taking part in Saturday's festival.

"I am very excited because it's the first pride parade after same-sex marriages are recognised and I got married," said Shane Lin, who became one of the first to wed his partner in the days after the new law came in.

"I am very moved that people around the world are joining us," the 31-year-old said.

Behind him passed a stready stream of colour, from dancers with gym-honed bodies, to unicorn floats and rainbow balloon arches.

"I support marriage equality because it is a basic human right," Henry Wu, a heterosexual teacher who brought his five-year-old son to the march, told AFP.

"Taiwan made huge progress in legalising same-sex marriages ... I feel very proud we are the first in Asia to do so," he added.

In the last decade Taiwan has become increasingly progressive on gay rights with Taipei home to a thriving LGBT community and increasingly large pride marches.

But the issue of same-sex equality has deeply polarised society.

Taiwan's Constitutional Court made a landmark ruling in 2017 to legalise gay marriage and ruled its decision must be implemented within two years.

Conservative and religious groups mobilised to oppose amending the Civil Code and comfortably won a series of referendums last November in which voters rejected defining marriage as anything other than a union between a man and a woman.

In May, conservative lawmakers put forward rival bills that offered something closer to limited same-sex unions but those measures ultimately failed in parliament.

Opponents have vowed to punish incumbent President Tsai Ing-wen and the lawmakers who supported the gay marriage law at January 11 elections when voters will elect both a new president and a new parliament.

But it remains to be seen whether the issue will harm her on the campaign trail, especially in more rural and conservative places, during an election that will more likely be dominated by the relationship with China and local economic issues.

Same-sex couples can currently only adopt their partners' biological children and can only wed foreigners from countries where gay marriage is also recognised.

"Marriage equality is the beginning, it's not the end," said Leong Chin-fai, a 31-year-old Macanese national who is currently unable to wed his Taiwanese partner.

"We hope to keep pushing for issues including recognition of international marriages, parental and adoption rights," he added.

Taiwan is at the vanguard of the burgeoning gay rights movement in Asia. It is also praised as a "beacon" of democracy in the region for its democratic reforms and civil liberties since it emerged from one of the world's longest periods of martial law.

But International Federation for Human Rights (FIDH) noted Taiwan still faces key challenges and passed a motion condemning its use of death penalty Friday as it wrapped up a week-long congress in Taipei, its first held in Asia.