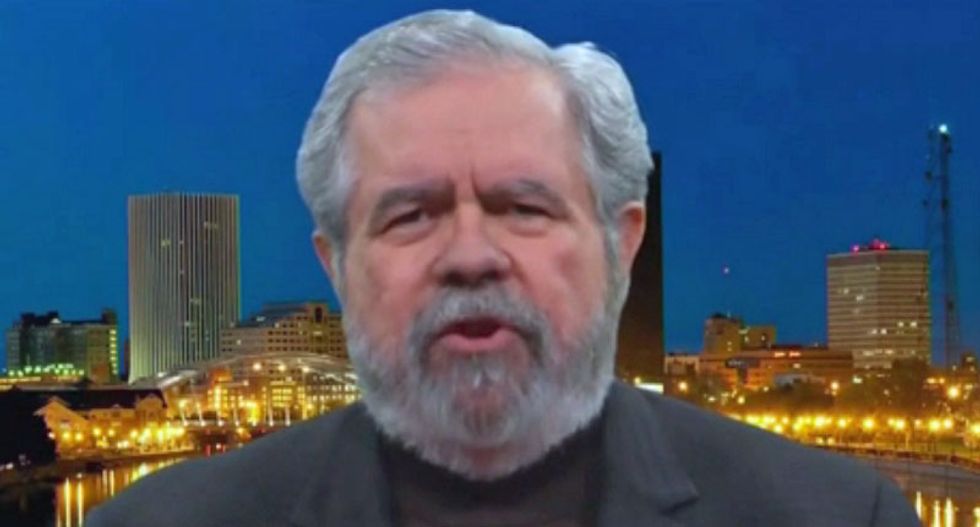 On Thursday's edition of MSNBC's "All In," Pulitzer Prize-winning tax expert and Trump biographer David Cay Johnston discussed the emerging IRS whistleblower scandal — which comes at exactly the same time the president is facing an impeachment inquiry over another whistleblower alleging misconduct in phone calls with foreign leaders.

"What do you make of this?" asked host Chris Hayes.

"Well, the Washington Post's very diligent reporters got to the whistleblower who is a career IRS official, I assume an executive, and who was concerned about some of the reports about this complaint," said Johnston. "And what’s become very clear is that someone from Treasury who’s a political appointee — and there aren’t that many of them over in Treasury, but I would point out one of them was a treasury secretary — some have tried to interfere in the audit of Trump’s returns."

"The IRS has very detailed procedures for how it examines the returns of the president and the vice president," explained Johnston. "They’re sent to Austin, Texas, put in double envelopes. Their instructions are never to be folded or written upon, with some minor exceptions, because they eventually go to the national archives. And whatever happened here, it’s enough that Richie Neal, the congressman who’s chairman of the Ways and Means Committee, seems — thinks this is quite important we get to what exactly kind of interference there was, and there shouldn’t be so much of a phone call saying, 'Hey what’s up with the audit?'"

"This person was told again that they did not witness this first-hand, they were told this happened and we haven’t definitively established the interference has happened as of yet," said Hayes. "It seems to me that would be a good thing to get to the bottom of."

"Yes, and part of doing that would be for the Internal Revenue Service commissioner to obey the law," added Johnston. "We have a nearly 90-year-old anti-corruption law that says, you shall turn over the tax returns. And by the way, Trump has the same right. He can call up your or my tax returns if he wants to under this law."

"We know about the whistleblower under this court filing by Chairman Neal, and his court battle to shake loose these returns from Treasury, but today the Washington Post actually talked to the whistleblower," said Hayes. "He has legitimate concerns about reckless statements being made about whistleblowers. You have to imagine this individual is now under a fair amount of pressure."

"Yes, and if identified, has to worry there’ll be some effort to fire them," agreed Johnston. "And Trump very clearly here is trying to intimidate whistleblowers, to say to the bureaucracy and people especially in the State Department and the FBI, keep your mouth shut or life will be difficult for you. Trump, when asked about putting in danger the life of one of the whistleblowers because — not of him personally but crazy people out there — and Trump just shrugged off the question. And this should be very deeply disturbing to us, because this is not what an honest, legitimate government of the people, by the people, for the people, that owes its existence to the people, should be doing."