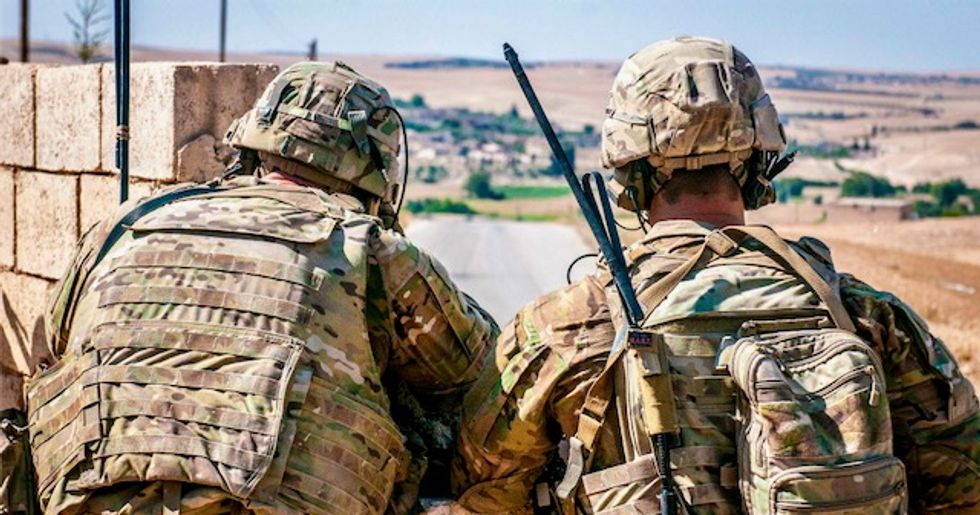 Noting Turkey's claims that this was a mistake, the U.S. peace group CodePink declared that "this is what happens when a country goes into a war of expansion so callously and rapidly."

According to the unnamed Pentagon official, "shelling by the Turkish forces was so heavy that the U.S. personnel considered firing back in self-defense." However, "instead of returning fire, the Special Forces withdrew once the shelling had ceased."

Following Newsweek's report, a Pentagon spokesperson, Navy Captain Brook DeWalt, said in a statement that "the explosion occurred within a few hundred meters of a location outside the Security Mechanism zone and in an area known by the Turks to have U.S. forces present."

Despite the artillery fire, DeWalt said that all U.S. troops are accounted for with no injuries and have not withdrawn from Kobani.

"The United States remains opposed to the Turkish military move into Syria and especially objects to Turkish operations outside the Security Mechanism zone and in areas where the Turks know U.S. forces are present," he added. "The U.S. demands that Turkey avoids actions that could result in immediate defensive action."

The Pentagon's official remarks contrasted with a statement from the Turkish Defense Ministry on Friday. According to Newsweek:

The ministry affirmed that "Turkish border outposts south of Suruc came under Dochka and mortar fire from the hills located approximately 1,000 meters southwest of a U.S. observation post."

"In self-defense, reciprocal fire was opened on the terrorist positions of the attack. Turkey did not open fire at the U.S. observation post in any way," the statement added. "All precautions were taken prior to opening fire in order to prevent any harm to the U.S. base. As a precaution, we ceased fire upon receiving information from the U.S. We firmly reject the claim that U.S. or coalition forces were fired upon."

Linking to Newsweek's report, the U.S. peace advocacy group CodePink challenged Turkey's statement, tweeting: "They say this was a mistake. We say this is what happens when a country goes into a war of expansion so callously and rapidly."

BREAKING: Turkey, as part of its ongoing assault on the Kurds, has just bombed a contingent of the US special force… https://t.co/S2RGYVKKul
— CODEPINK (@CODEPINK)1570822831.0

U.S. and coalition officials cast doubt on Turkey's claims in comments to journalists:

Turkish Defense Ministry: there was no deliberate shelling of a US base. Kurdish fighters fired on Turkey from the… https://t.co/4GOjZqtPnk
— Liz Sly (@Liz Sly)1570830742.0

Coalition official tells me after Turkish bombing near US base Mashtenour hill: “They know we are there, we told th… https://t.co/NjDMfLKiG6
— Josie Ensor (@Josie Ensor)1570824817.0

"One U.S. official told CNN the U.S. does not believe the Turkish shelling near U.S. troops posted near Kobani was an accident and that it was likely designed to chase the U.S. from the area," the news outlet reported, noting that "the U.S. has previously announced that it gave Turkey 'explicit grid coordinate detail' of U.S. positions in Syria."

CNN also highlighted comments on Twitter from Brett McGurk, the former presidential envoy to the global coalition to counter the Islamic State (ISIS) who is now a foreign affairs analyst for NBC News and MSNBC.

Turkey launched airstrikes and ground incursions targeting Kurdish forces along the Turkey-Syria border on Wednesday after Trump announced Sunday—following a call with Turkish leader Recep Tayyip Erdoğan—that U.S. troops "will no longer be in the immediate area." Trump's announcement was widely decried by American lawmakers across the political spectrum as well as humanitarians the world over.

Critics accused Trump of abandoning the United States' Kurdish allies who helped defeat ISIS in the region. By standing aside and allowing Turkey's operation to move forward, "the Americans," said one Kurdish official, "have abandoned us to a Turkish massacre."

The Syrian Democratic Forces (SDF)—a coalition of Kurds, Arabs, and Turkmen, led by the Kurdish People's Protection Units (YPG)—guard about 11,000 ISIS detainees in facilities throughout northern Syria. An SDF spokesperson said Friday that five ISIS prisoners escaped a facility in Qamishli city, renewing fears about a resurgence of the terrorist group because of Turkey's operation.

A humanitarian group in the region reported that as of Thursday, at least 11 people have been killed by the Turkish bombing campaign. Turkey's defense officials claimed that as of Friday, their forces have killed 277 Kurdish fighters and had advanced five miles into parts of Syria.

U.S. Defense Secretary Mark Esper said Friday that Turkey would risk "serious consequences" if it doesn't cease its attacks and—while announcing that Trump will sign an executive order giving his administration broad authority to hit the country with sanctions—U.S. Treasury Secretary Steven Mnuchin claimed that "we can shut down the Turkish economy if we need to." However, beyond such threats, the Trump administration has not yet taken any public and formal actions to curtail or end the Turkish offensive.