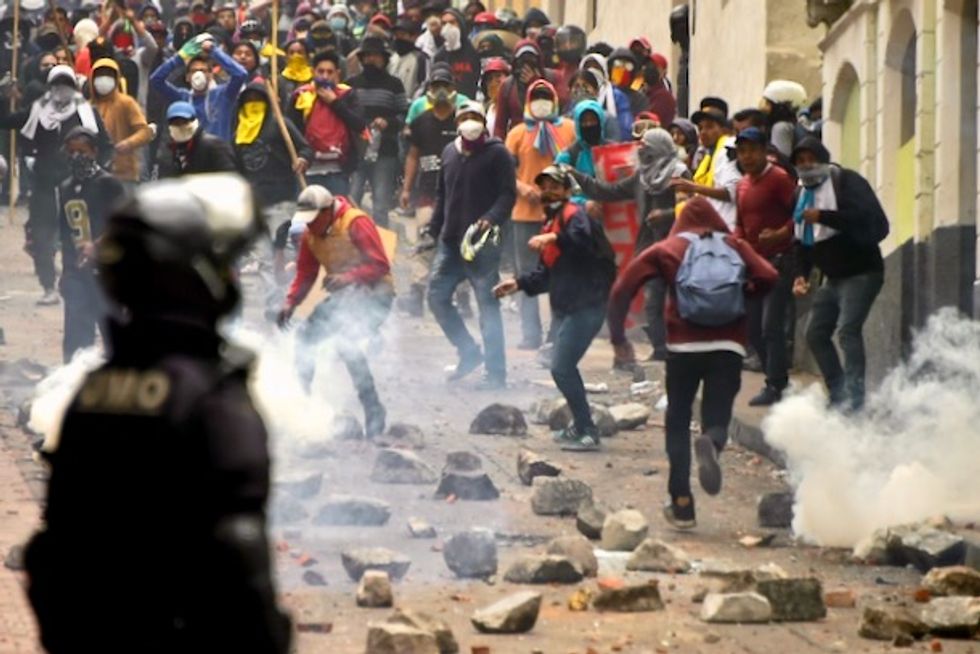 Protesters in Ecuador fought a running battle with security forces Wednesday in a second day of violent demonstrations over a fuel price hike that forced the government to suspend most of the country's deliveries of crude.

The violence broke out as thousands of people representing indigenous groups, farmers, students and labor unions marched on a square in Quito's historic center near the government headquarters.

AFP / Rodrigo BUENDIA The protestors are demanding Moreno reinstate fuel subsidies that were rescinded after $4.2 billion in loans was agreed with the IMF

After clashes broke out in the area Tuesday, the government of President Lenin Moreno posted security forces to keep the march from reaching the plaza.

Protesters on Wednesday broke off from the main procession and hurled rocks at riot police, who fought back with volleys of tear gas and water cannon.

Several people were injured in the clashes.

The protesters are demanding that Moreno reinstate fuel subsidies that were rescinded after $4.2 billion in loans was agreed with the IMF.

"Without a doubt, this is going to be solved very soon," Moreno said in a video broadcast on state television following the day's violence.

But indigenous leader Salvador Quishpe said the "demonstration is ongoing, it has not ended."

Thousands meanwhile gathered in the port city of Guayaquil some 170 miles (270 kilometers) southwest of Quito, in protest at the demonstrations in the capital.

"Democracy will not fall in the streets of Guayaquil!" the city's mayor Cynthia Viteri told the crowd, most of whom were dressed in white in a pro-peace display.

Discussions with leaders of the powerful indigenous umbrella organization CONAIE also took place in Guayaquil, where Moreno moved his government operations Monday due to the ongoing disturbances in the capital.

"There is dialogue with the brother indigenous peoples who unfortunately have needs," Moreno said of the groups which make up a quarter of the population of the country's 17.3 million people.

He also offered to free up resources for those hit hard by the rise in fuel prices.

The unrest threatened to inflict wider damage on an already weakened economy.

The energy ministry announced it was shutting down one of the country's two domestic oil pipelines, effectively suspending two-thirds of its distribution of crude.

"Due to this shutdown, we are analyzing the possibility of declaring force majeure," to avoid the country incurring penalties for postponing crude shipments, the ministry said in a statement.

Ecuador, which exited the OPEC international oil cartel last week citing economic constraints, produced more than 500,000 barrels-per-day (bpd) -- which was worth some $4.6 billion in exports in the first six months of the year.

However, Wednesday's shutdown accounts for 68 percent of its oil output, the ministry said, adding that the protests had cost $12.8 million in lost production to date.

Demonstrations broke out after increases of up to 120 percent in fuel prices came into force on October 3.

They have left one civilian dead and 122 people injured, with 766 detained, according to the latest figures from the authorities and the Red Cross.

Moreno has accused his predecessor and ex-ally Rafael Correa along with Venezuelan President Nicolas Maduro of an "attempted coup d'etat."

"The evidence points precisely to him (Correa) as a key player," Moreno insisted in an interview with CNN Wednesday.

In Washington, a senior US official backed the allegations and voiced hope that all sides in Ecuador would sort out their differences peacefully.

"Unfortunately the Correa people with their friends in Venezuela and Cuba and so on are provoking demonstrations and some degree of violence there," the official said on condition of anonymity.

AFP / Martin BERNETTI Protests in Ecuador are being led by indigenous leaders, farmers and labor unions

Maduro, a leftist firebrand whom Washington is seeking to oust, has denounced allegations of involvement as absurd.

Moreno has drawn support, however, from seven Latin American countries -- including Argentina, Brazil and Colombia -- that, in a joint statement, rejected any effort by Maduro and his allies to "destabilize" Ecuador.

Correa, meanwhile, called for early elections and denied he was attempting to oust Moreno.

"There's no coup here. Conflicts in democracy are resolved at the polls," the Belgium-based Correa said in a video published on social media.

Australia's scandal-hit government on Thursday apologized for calling an alleged rape victim a "lying cow," sparking fresh claims of a "toxic" culture in the country's corridors of power.

Political appointees of former President Donald Trump say they're struggling to pay their rent because promised lump-sum vacation payouts still have not been delivered.

Politico talked with seven different Trump appointees who say they're struggling to find work and are in desperate need of the money they're owed for vacation days they didn't take during their time working at the Trump White House.