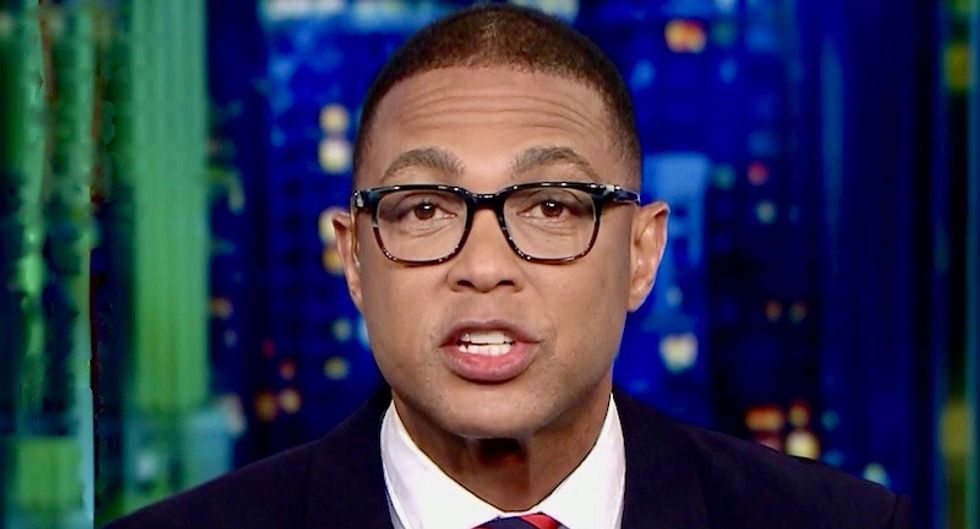 CNN's Don Lemon and his Wednesday night panel were struck by the GOP resistance to hold a legitimate investigation into President Donald Trump's actions.

"He has invited foreign election interference; he has misused his power for personal political gain," Washington Post conservative columnist Max Boot said. "If any Democrat had done this, every single Republican would be calling not just for impeachment but for capital punishment, but they just have no principles when it comes to Trump. I'm prepared to be pleasantly surprised, and I would be if you see even a handful of Republican members in either chamber voting for impeachment. But I think the vast majority of Republicans are just utterly spineless in standing up for the rule of law. They're just going to give Trump whatever he wants."

Lemon noted that it's the main reason that Boot left the GOP.

"Right, because they have no principles," Boot agreed.

Democratic strategist Kirsten Powers noted that this is an "open and shut case," and Trump very obviously violated the law. Indeed, Trump admitted to the crime on television, saying that it doesn't matter that he asked Ukraine to investigate a conspiracy theory about his political opponent. He then went on to ask another country to do the same.

Boot noted that if Republicans aren't willing to impeach Trump for this, or even for the obstruction of the inquiry, "what would they consider to be impeachable."

In the 1990s, the GOP found it abhorrent that a Democratic president had an extra-marital affair in the Oval Office and impeached him for lying about it.

"Well, I wanted to ask, as I see the apologists for the president, especially on conservative media, they seem gleeful in their ignorance," Lemon noted. "What is so gleeful about being ignorant or about misleading the public?"

"Well, that's — I mean, that's the reason why they're promulgating these crazy conspiracy theories and saying things that are flat-out untrue," said Boot. "They're repeating Trump's claim that the transcript of the phone call refutes the whistle-blower's account, which is false. It actually confirms the whistle-blower's account in every point. They can't argue on the facts because the facts are against them, and so they're just making things up. They're just making things up out of thin air just to say stuff, and basically, you know, trying these schoolyard taunts like, you're not going to impeach me. I'm going to impeach you."