'Trouble with the facts': Fox's Chris Wallace schools Kellyanne Conway for whining about the impeachment process 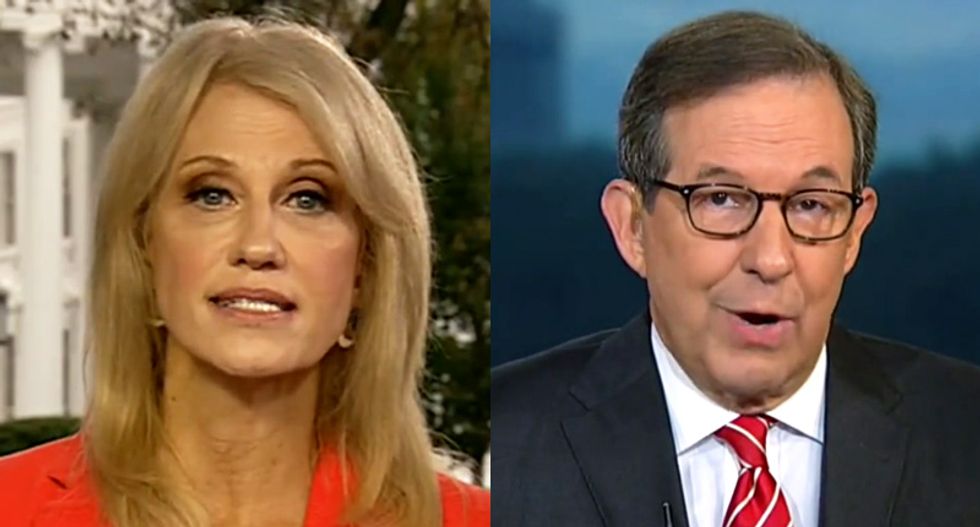 Fox News Sunday anchor Chris Wallace on Friday shot down claims that the impeachment inquiry in House of Representatives is being unfair to President Donald Trump.

Fox News host Sandra Smith asked Wallace to respond to White House advisor Kellyanne Conway, who had claimed that the impeachment inquiry against Trump lacked "due process" in part because depositions were being held behind closed-doors.

"Well, my feeling is that if you are having trouble with the facts, you argue process" Wallace replied. "That’s what Republicans are doing right now. The Democrats have gotten some very damaging information from people like William Taylor, the acting U.S. Ambassador to Ukraine, [and] Fiona Hill, who used to be one of the top advisors in the National Security Council on Ukraine."

"Evidence that seems to tie more of a quid pro quo... that there is some evidence from these people working in the Trump administration that the president linked aid to Ukraine, White House meeting with Ukrainian president to getting oppo research on the Democrats."

"What Republicans are doing they’re arguing the process is unfair," Wallace explained. "You can make that argument, but if you look back during Benghazi when that was being investigated by Trey Gowdy, they had hearings in private and depositions in private. You try to build your case, figure out who are the witnesses that can say something and who can't. Then you will end up holding public hearings anyway."