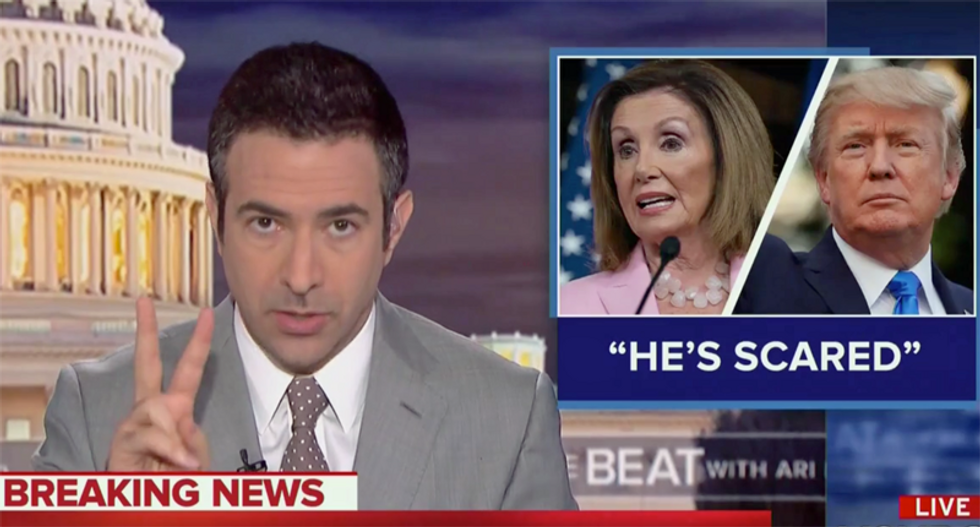 President Donald Trump committed "two separate potential crimes" on Wednesday as part of his ongoing cover-up and defense of his Ukraine scandal.

"The Trump administration under fire on many fronts tonight," Ari Melber said at the start of "The Beat" on MSNBC.

The host, the network's chief legal analyst, played a clip of Speaker Nancy Pelosi (D-CA) and House Intelligence Chairman Adam Schiff (D-CA) discussing the urgency of impeachment and threatening to charge Trump with obstruction if he refuses to comply with congressional subpoenas.

"A stark warning to a president who’s long claimed he welcomes impeachment, that it would help him politically," Melber noted. "Well, today the president did not seem to be celebrating the march towards this as some kind of political boost."

"He wasn’t taunting House Democrats to finish the job, which is what someone would say if they wanted to be impeached," Melber explained. "No. The president personally attacked Chairman Schiff and advocated — and I say this explicitly -- he advocated two separate potential crimes in his remarks today: the advocacy of exposing the whistleblower against federal law and the advocacy of a treason investigation of the member of the opposition party."