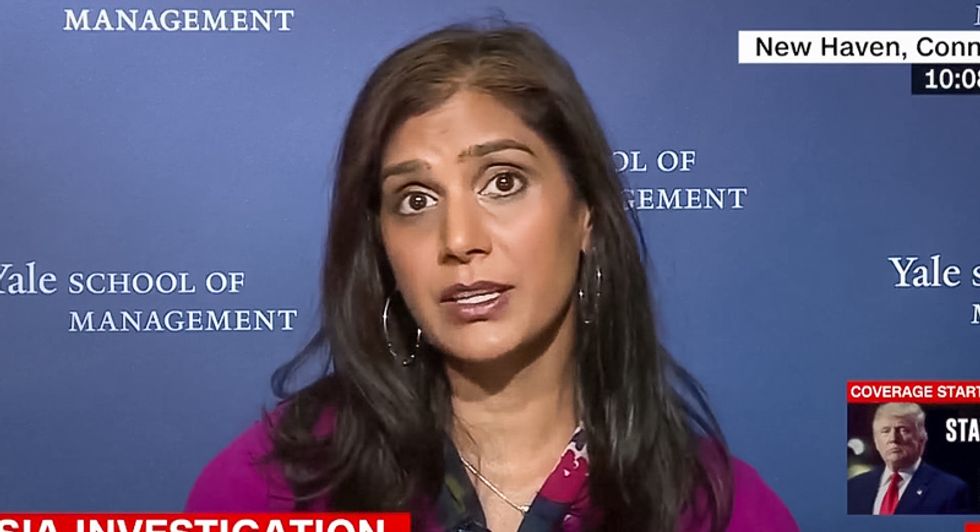 President Donald Trump's foreign election interference scandal is the result of an "illegal" and "covert" psychological operations (PSOP) on the American people, a former FBI special agent has expertise in the arena explained on Friday.

"One thing not to overlook in understanding the significance of the texts is that in addition to soliciting section assistance and abusing his power, Trump was attempting to employ covert propaganda against the American public," she wrote, posting a clip of her appearing on CNN.

"As I note in the clip above, one thing the texts make clear is that the administration wasn't just interested in Ukraine investigating Biden -- they were specifically interested in the *messaging* about the investigation. If what you care about is "corruption," you would be satisfied with an assurance that Ukraine was going to investigate. Instead, the Trump admin doesn't care so much about the investigation itself, but making sure that the fact that it is being investigated is *being broadcast* to the audience they care about: American voters."

"IMPORTANTLY, they are very invested in the message being crafted in a *specific way* -- tailored to Trump's benefit by maximizing the "seeds of doubt" on both Biden and the 2016 election. It's being drafted by Trump's personal lawyer!" she noted. "In addition, the message was going to be delivered as an official statement from Ukraine, with NO INDICATION that the United States either precipitated or participated in its creation in any way."

"This, folks, is called black propaganda," Rangappa concluded. "Black propaganda attempts to conceal the true source of information, so that the target cannot accurately assess the credibility of the message or the motives of the source behind it. Trump wanted to cloak his own role and motives behind a statement of a foreign country."

"The goal here is to manipulate the American public into to thinking that Ukraine had *independently* reached the same conclusions about the Russia investigation, and/or uncovered criminal leads about Biden," she explained. "Trump could then use this to bolster his own views."

"Not for nothing, but a good chunk of the cases I investigated in the FBI were 'perception management' (propaganda) cases," she revealed. "We actively try to STOP foreign countries from doing this to us, because we believe that part of an open society and marketplace of ideas is ensuring that people know the true source of information in order to assess credibility and critically evaluate the content (FARA originated in 1938 as a way to combat Nazi propaganda, [by] requiring state-sponsored content to be identified as such)."

" Basically, you have the Trump admin attempting to conduct an illegal covert psyop on the American public, using officials from the State Department and his own attorney to do it. It's literally a version of what Russia did in 2016," Rangappa concluded.