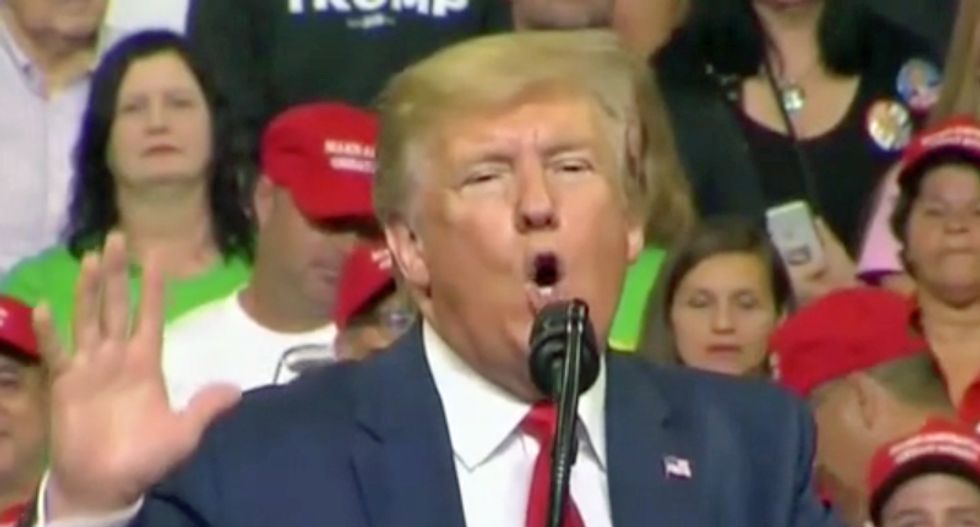 At his rally in Minneapolis on Thursday, President Donald Trump drifted into an angry rant against the impeachment proceedings — and defended the "totally appropriate, casual, beautiful, accurate phone call" he shared with Ukrainian President Volodymyr Zelensky.

"We have the greatest economy, the greatest military — we have rebuilt our military. $2.5 trillion dollars because when I took it over, it was a mess, and what do they want to do? Let's impeach our president," said Trump as his supporters cheered. "I don't think so. I think we are going to have a turnout likes of which we have never seen in the history of our country."

"We were really forced just to put it away," he continued. "We were forced, they said just do it. Got the approval from Ukraine. I had to ask. I said do you guys mind. They said that's a strange request. They said don't worry about it. I said, do you mind? They said please, go ahead. So we released the transcript of the call, which was so good that that crooked Adam Schiff — this guy is crooked."

"He had to make up a fake conversation that never happened, and he delivered it to the United States Congress and to the American people," Trump added, as the rallygoers booed. "It was a total fraud. And then Nancy Pelosi said, 'Oh, I think the president said that.' These people are sick, I'm telling you. They are sick. And you know what? Had they waited one day longer, they would have had the transcript of the actual call. Word for word. It would have been perfect. Instead, they released it — they went early. They said all these horrible things. You know why? Because they never thought in a million years I was going to release a transcript of the call."

Trump continued on, seemingly unaware that the transcript he released lines up very closely with what House Democrats are accusing him of.

"So Nancy Pelosi, upon hearing a false story from a whistleblower that had no clue what was going on in that call or somebody gave very bad advice, but also hearing it from Shifty Schiff — Nancy Pelosi said, a day before seeing the transcript of the call with the Ukrainian president, 'We've got to impeach him. We've got to impeach him.' Right? And then she saw the call and said to her people, 'What the hell? Nobody ever told me this was the call.' But she keeps going anyway because the press is fake, and they play right into their hands."

"The do-nothing Democrat extremists have gone so far left that they believe it should not be a crime to cross our border illegally and it should be a crime to have a totally appropriate, casual, beautiful, accurate phone call with a foreign leader — I don't think so," Trump thundered to ongoing boos.