Trump has figured out how to get taxpayers to renovate one of his golf courses: MSNBC panel 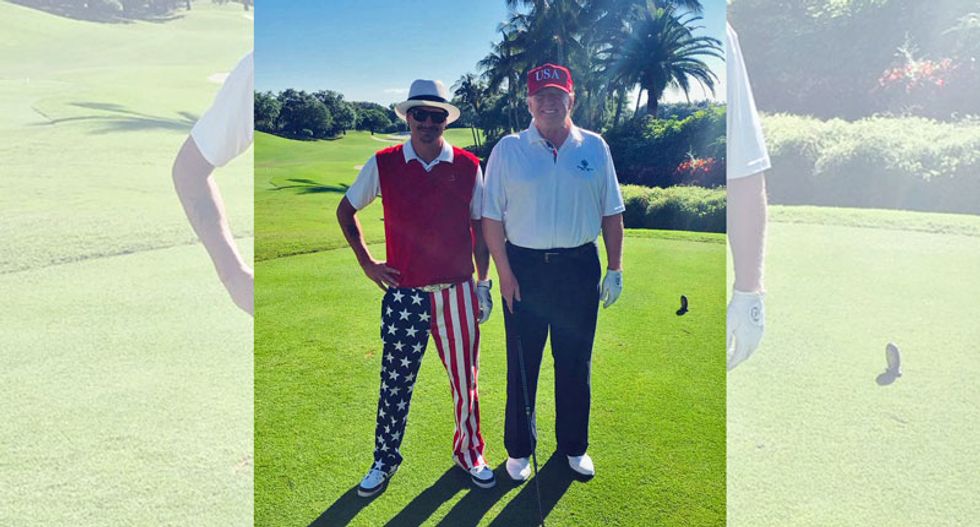 President Donald Trump has figured out how to have taxpayers pay to renovate his Trump National Doral Miami golf course, according to an analysis by MSNBC's Stephanie Ruhle.

"Before setting himself on fire on Ukraine yesterday, Mick Mulvaney came into the White House briefing room to break to the nation the fact the that the Trump Doral golf resort turns out to be -- in his estimation, organically, just sitting there -- the best possible place to have a G-7 Summit of world leaders," MSNBC's Brian Williams reported. "That was provision number one. There’s no better place that we can find. Number two was, the president will not profit from said G-7."

"You happen to disagree with Mulvaney on both counts. Why?" Williams asked.

"I woke up this morning to calls from former administration officials and hotel developers that said, 'I can’t listen to this for one more minute.' For Mick Mulvaney to say the president is not going to profit, he’ll be doing this as cost -- what does “at cost” mean? In the month of June, you tell me, are you vacationing at a golf resort in Miami? Miami is absolutely dead in the month of June," Ruhle explained. "Costs are already sunk. The president and his business are paying a whole lot of money to keep that resort open and no one is staying at a golf resort in Miami in June. So they’re already losing money. Now the G-7 summit will take place there and they’ll make a whole lot of money."

"For Mulvaney to say the president is not going to be making money, he's doing it at cost, is absolutely disingenuous," she charged.

"And you believe taxpayers will end up footing some of the cost anyway?" Williams asked.

"Without a doubt," Ruhle replied.

"To say the G-7 is just for a couple of weeks, they’ll be making money then, a former administration official said to me, you will see this hotel packed for 50 to 100 nights if you figure in all the logistics, the advance teams, all the preparations, and the people who will need to stay there ahead of the summit," she reported.

"And then when the event is over, they’re going to have to put it back to normal. So when they put, for example, helipads down on the golf course, they need to be removed after. When they’re removed, guess what’s going to need to happen? Renovate that golf course -- paid for by taxpayers," Ruhle explained.