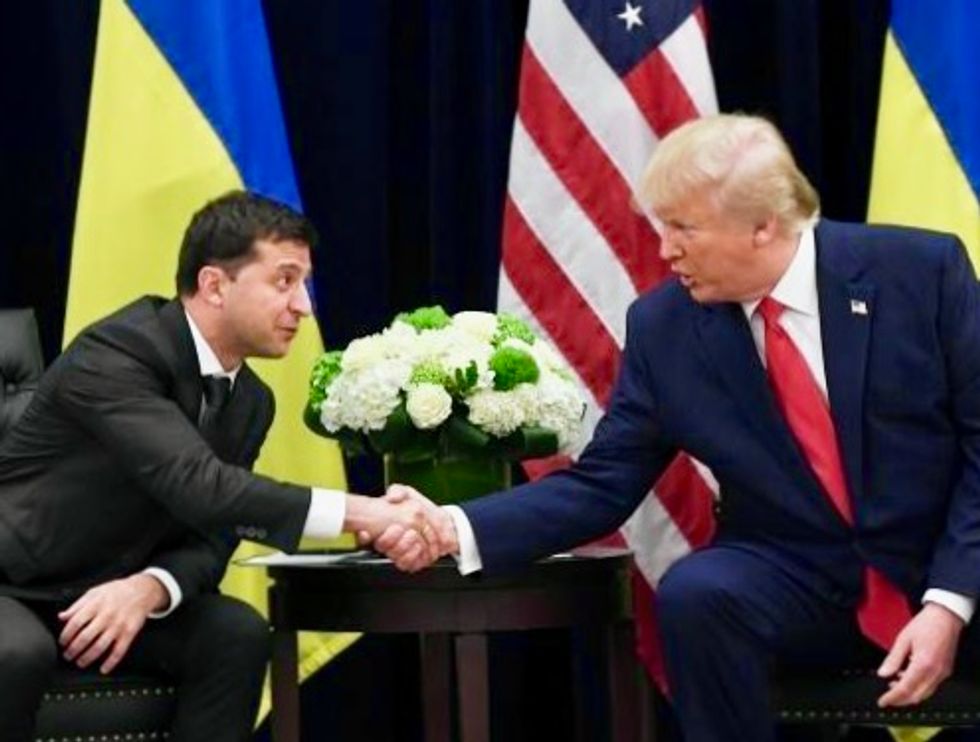 On a cold December night in 2016, Marie Yovanovitch, the U.S. ambassador to Ukraine, spoke to an anxious audience at a library in the southern Ukrainian port of Odessa. The audience was eager to hear what the recent election of Donald Trump might mean for their own security.

Yovanovitch had been my boss at the U.S. Embassy in Ukraine 15 years before, when she was deputy chief of mission. I had recently returned to Ukraine as a Fulbright scholar and wanted to learn what this seasoned diplomat had to say to a city that now housed the main base of the Ukrainian Navy.

Yovanovitch’s talk took place against a backdrop of military conflict that threatened Ukraine’s independence. That conflict began with Russia’s 2014 capture of the Ukrainian territory of Crimea, only 125 miles away.

Yovanovitch assured the audience that the U.S. would remain committed to protecting the sovereignty and democracy of this eastern European nation.

This was the same nonpartisan message that Republican and Democratic administrations had been providing since the American recognition of Ukraine.

And it’s that commitment that was in question recently, as Ukraine and its president found themselves entangled in a scheme that could lead to the impeachment of President Trump.

On Dec. 25, 1991, faced with the collapse of the Soviet Union, the administration of George H. W. Bush reversed its earlier insistence that Ukraine remain in union with Moscow and formally recognized its independence.

Multiple American presidents have since viewed support of this state – the second largest in Europe after Russia – as critical to the U.S. national interest.

A major premise for early American support was Ukraine’s 1994 agreement to give up its large nuclear weapons arsenal in return for American, Russian and British guarantees of Ukraine’s borders.

As Russia grew more politically volatile under President Boris Yeltsin, the United States begin to invest even more in a partnership with Ukraine.

By the mid-1990s, Ukraine became the third-largest recipient of U.S. aid, after Israel and Egypt.

The extensive U.S. aid to Ukraine was contingent on the country’s embrace of democratic reform and the free market. A major challenge to achieving this goal was endemic corruption.

In 2001, as a fellow in the political section of the U.S. Embassy in Kyiv, I drafted the Country Report for Human Rights under the direction of Yovanovitch.

These State Department reports record a country’s compliance with international human rights norms, mainly as a condition for getting American foreign aid. The 2001 report stated that “the pervasiveness of corruption, connections between government officials and organized crime, and the political activities of organized crime figures often blurred the distinction between political and criminal acts.”

The public perception that the Ukrainian president at the time, Leonid Kuchma, and his political allies were corrupt inspired a majority of Ukrainians to oppose Kuchma’s chosen successor in the 2004 presidential election, Prime Minister Viktor Yanukovych.

In his campaign, Yushchenko had sworn to uphold the rule of law. President George W. Bush, visiting Kyiv in 2008, pledged to help: “We work together to fight corruption and support civil society groups and strengthen institutions of a free and prosperous economy.”

However, Yushchenko’s efforts were frustrated by political infighting among his former backers and a constitutional reduction in presidential power that he had conceded in negotiations with Yanukovych’s supporters.

Six years later, the disgraced Yanukovych staged a political comeback. He won the presidency of Ukraine in 2010 with the help of foreign political consultants, including future Trump campaign adviser Paul Manafort.

Upon assuming office, Yanukovych aimed for greater power. He annulled the 2004 constitutional amendments limiting presidential power, jailed a key political rival and brought the country to near bankruptcy through the alleged pocketing of public funds.

In late 2013, Ukrainians demonstrated in Kyiv in protest of Yanukovcyh’s last-minute refusal to support ethics reforms required as a condition of enhanced cooperation by the EU. Public outrage at his use of armed police to suppress the protesters forced Yanukovych to flee the country in February 2014 and vacate the presidency.

Russian president Vladimir Putin took advantage of the instability in Ukraine to invade and annex the Crimean Peninsula in March 2014. He also sponsored a separatist movement in the Donbas, the southeastern part of Ukraine. Those separatists remain at war with the Ukrainian central government to this day.

In response, the Obama administration imposed a series of travel bans and sanctions against Russian politicians and businesses.

Amid the chaos, in June 2014, a veteran politician named Petro Poroshenko was elected president of Ukraine, promising to restore the country’s territorial integrity, sign the EU association agreement and eliminate corruption. As one of Ukraine’s wealthiest citizens, he seemed an unlikely advocate for reform.

Poroshenko was the first politician I met when I was in Ukraine in 2001 as an embassy officer. Like many Ukrainian oligarchs, he had gained his wealth in the 1990s by buying former state property on the cheap.

At an opulent lunch at the Kyiv’s Hotel Dnipro back in 2001, he regaled me with stories of his son at the elite British boarding school, Eton College.

As president, Poroshenko’s effort to defeat the Russian-backed Donbas separatists met with some success – until Russia reinforced their position with supplies of new weapons, equipment and personnel in August 2014. U.S. military assistance that began under the Obama administration has proven critical to modernizing the Ukrainian army for combat with the insurgents.

Poroshenko also implemented a number of anti-corruption initiatives, including the establishment of a National Anti-Corruption Bureau. However, public opposition mounted against the inactivity and selectivity of those he tasked with fighting corruption. Oligarchs can turn reformers, but they still require the public’s trust to retain legitimacy.

Perception of inaction helped contribute to Poroshenko’s March 2019 electoral defeat by the former actor-turned-populist politician and anti-corruption crusader, Volodymyr Zelensky. This is the leader whom Trump and his associates pressured to open an investigation into Hunter Biden and Burisma Holdings on already discredited charges.

Ukraine has a justified reputation of being perennially corrupt, but this claim masks the repeatedly exhibited public demand for government accountability and the enduring, nonpartisan U.S. commitment to assist in the achievement of this ambition.

Yovanovitch, the former Ukraine ambassador, was summoned as part of the impeachment investigation to testify before the House Intelligence Committee on October 11.

She told lawmakers, “Since 2014, Ukraine has been at war, not just with Russia, but within itself, as political and economic forces compete to determine what kind of country Ukraine will become.”

Her ousting by Trump in March, she claimed, disrupted an opportunity to help consolidate a reform mandate given by the Ukrainian voters.

And President Trump’s witholding of military and humanitarian aid to Ukraine in exchange for an investigation of a political rival undermined the many years of U.S. advocacy for systemic reform in Ukraine. It also threatened the post-2014 anti-corruption push by Ukrainians themselves.

An October 10, 2019 State Department fact sheet, “U.S. Relations With Ukraine,” maintains that “U.S. policy is centered on supporting Ukraine in the face of continued Russian aggression as it advances reforms to strengthen democratic institutions, fight corruption, and promote conditions for economic growth and competition.”

Yet Trump’s actions have dangerously undermined Ukrainian national security. A Ukraine imperiled by war with Russia would appear to require the material and moral support of its American ally more than ever.