Trump polling close friends over whether he should fire Mulvaney: report 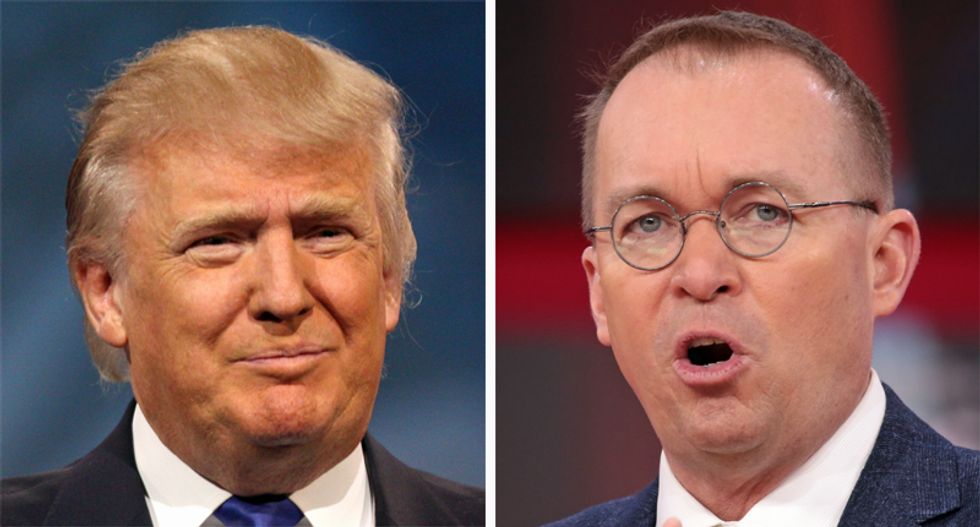 President Donald Trump is considering firing Mick Mulvaney, his acting White House chief of staff and director of the Office of Management and Budget, The Atlantic reported Friday.

"Mick Mulvaney's job was in danger even before his disastrous press conference yesterday, and his equally disastrous attempt to walk that performance back," The Atlantic reported. "The fumble could not have been more poorly timed: According to multiple current and former White House officials, many of whom spoke on the condition of anonymity to relay private conversations, Trump has been steadily souring on Mulvaney for weeks."

Mulvaney confessed that there was a quid pro quo, then attempted to take back his confession.

"The president has polled confidants about whether Mulvaney is up to the job, blaming him for leaks and negative news coverage, and considering whether he should find someone else to run the West Wing. It might stand to reason, then, that with Trump’s growing frustrations with Mulvaney—coupled with a performance yesterday that could put Trump in greater legal jeopardy than ever before—Mulvaney’s days as acting chief of staff are numbered," The Atlantic.

Mulvaney's confession is difficult for Trump supporters to defend.

"For a White House staffer, there is perhaps no worse place to be than in Sean Hannity’s crosshairs, and that’s where Mulvaney found himself yesterday, after undercutting the administration’s talking points on impeachment in a way that not even a Trump-loving Fox News host could spin," ,em>The Atlantic noted.