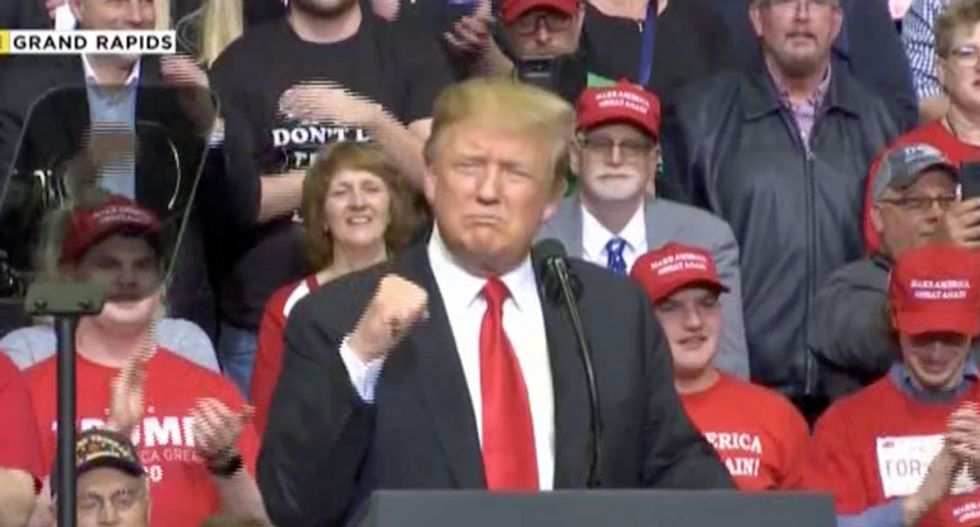 President Donald Trump thinks he will win New Mexico. He's repeated the factoid multiple times, including to a group of oil and gas workers and executives Wednesday at a conference in Pittsburgh, PA. But he also made two significant mistakes to put that support in jeopardy.

First, the president indicated he was building his "wall" on the border of Colorado, which is north of New Mexico. It would mean that New Mexico was now part of Mexico.

Second, it was reported by the Albuquerque Journal that their city is yet another one Trump's campaign is refusing to pay for security costs.

When Trump helped a September rally in New Mexico, it was in Rio Rancho, but many public agencies, including the City of Albuquerque had to come in to help with human resources, equipment and other resources.

"The Albuquerque Police Department incurred $71,242 in expenses to provide '1,528 hours of additional police coverage required by the campaign visit,'" The Journal cited an Oct. 17 letter with the invoice. They also owe $7,102 for barricades.

Albuquerque is just another in a long line of states and municipalities that have been stiffed for security for Trump's campaign. Trump's team claimed that the US Secret Service is the one responsible for safety, but the Secret Service said that they couldn't reimburse municipalities for their involvement. It would take an act of Congress.

So, Trump has been operating in a kind of security grey-zone and taking advantage of the free equipment, security and resources from cities where he's trying to win votes.

Those cities and states include: Lebanon, Ohio, Mesa, Arizona and Erie, Pennsylvania, to name a few. According to the Center for Public Integrity, Green Bay and Eau Claire, Wisconsin; Tucson, Arizona; Burlington, Vermont and Spokane, Washington — have also been stiffed, but that was from before he was elected to the president and during the 2016 campaign.

Some cities, including El Paso and Minneapolis, have begun to get more aggressive with the Trump campaign’s refusal… https://t.co/iDd7NIAirg
— Dave Levinthal (@Dave Levinthal)1571877978.0

As Washington Post reporter David Fahrenthold pointed out, Trump also had Irish police protect him at his resort in Ireland. He charged then $100,000 in food and drink costs.

When @realdonaldtrump made a side trip to his Irish golf club this summer, dozens of Irish cops were sent to protec… https://t.co/pkAciMAujn
— David Fahrenthold (@David Fahrenthold)1571846698.0

In all, Trump owes more than $1 million he's refusing to pay. Meanwhile, he's demanding these places vote for him.

“If it were an official presidential visit, you don’t bill for that kind of thing,” county spokesman Tom Thorpe said. “It was campaign (related). That makes it different.”