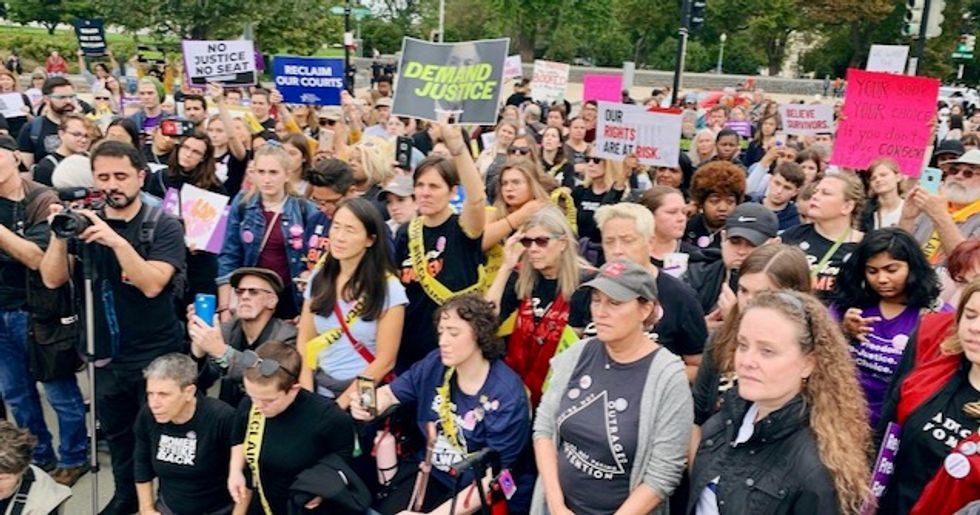 "Kavanaugh could be the deciding vote to gut Roe v. Wade for good. We need to hold him accountable," said Demand Justice. (Photo: Demand Justice/Twitter)

"The public deserves to know the truth about whether Kavanaugh lied under oath, whether he committed sexual assault, and whether he really deserves to be on the Supreme Court."

Marking the one-year anniversary of the Senate confirmation of Supreme Court Justice Brett Kavanaugh, a coalition of women's rights groups led a #ReclaimTheCourt rally in Washington, D.C. Sunday to demand that House Democrats investigate and impeach the right-wing judge as reproductive freedoms are under severe threat.

"Before the court hears any one of the myriad abortion-related cases that are currently making their way through the lower courts, the public deserves to know the truth about whether Kavanaugh lied under oath, whether he committed sexual assault, and whether he really deserves to be on the Supreme Court," the coalition wrote ahead of Sunday's demonstration.

Demand Justice, one of the groups that organized Sunday's protest, warned Sunday that "Kavanaugh could be the deciding vote to gut Roe v. Wade for good."

"We need to hold him accountable," the organization wrote, urging members of Congress to sign on to Rep. Ayanna Pressley's (D-Mass.) impeachment resolution against Kavanaugh.

Risking arrest, hundreds of activists blocked the road to the Supreme Court calling for Kavanaugh's impeachment:

Risking mass arrest, hundreds of #ReclaimTheCourt activists from all over the nation have converged to block the st… https://t.co/30CIFoI11A
— Popular Democracy (@Popular Democracy)1570390139.0

Protests also took place in Portland, Maine, where demonstrators looked to remind Sen. Susan Collins (R-Maine) that they have not forgotten her decisive vote to confirm Kavanaugh last year and plan to unseat her in the 2020 elections.