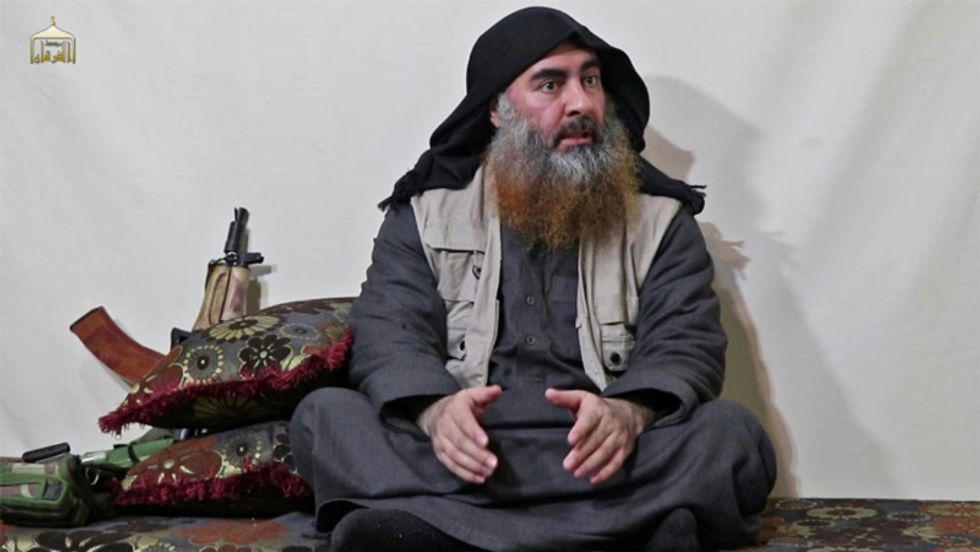 Jihadist supremo Abu Bakr al-Baghdadi, the world's most wanted man, was believed Sunday to have been killed in a US special operation in northwest Syria.

The elusive chief of the Islamic State group was thought to be dead after a US military raid in the Idlib region, US media reported early Sunday.

The White House announced President Donald Trump would make a "major statement" Sunday at 9:00 am (1300 GMT), without providing details.

A war monitor said US helicopters dropped forces in an area of Idlib province where "groups linked to the Islamic State group" were present.

The helicopters targeted a home and a car outside the village of Barisha in Idlib province, said the Britain-based Syrian Observatory for Human Rights, which relies on sources inside Syria for its information.

The operation killed nine people including an IS senior leader called Abu Yamaan as well as a child and two women, but it was not immediately clear if Baghdadi had been in the area, it said.

An AFP correspondent outside Barisha saw a minibus scorched to cinders by the side of the road, and windows shattered in a neighbour's house in rural land dotted with olive trees.

A resident in the area who gave his name as Abdel Hameed said he rushed to the place of the attack after he heard helicopters, gunfire and strikes in the night.

"The home had collapsed and next to it there was a destroyed tent and vehicle. There were two people killed inside" the car, he said.

US media cited multiple government sources as saying Baghdadi may have killed himself with a suicide vest as US special operations forces descended.

He was the target of the secretly planned operation that was approved by Trump, officials said.

The commander-in-chief of the US-backed Syrian Democratic Forces (SDF) who have been fighting IS in Syria said the operation came after "joint intelligence work" with American forces.

Ankara also said it had coordinated with Washington before the raid.

"Prior to the US Operation in Idlib Province of Syria last night, information exchange and coordination between the military authorities of both countries took place," the Turkish defence ministry said in a tweet.

From the outskirts of Barisha, an inhabitant of a camp for the displaced also heard helicopters followed by what he described as US-led coalition air strikes.

The AFP correspondent said the area of the night-time strikes had been cordoned off by Hayat Tahrir al-Sham, Syria's former Al-Qaeda affiliate controlling Idlib.

Long pursued by the US-led coalition against IS, Baghdadi has been erroneously reported dead several times in recent years.

Officials told ABC News that biometric work was under way to firm up the identification of those killed in the raid.

In 2014, IS overran large swathes of Syria and neighbouring Iraq and Baghdadi appeared in a video that summer announcing a "caliphate" in regions they controlled.

At the height of IS rule, Baghdadi's group implemented its brutal version of Islamic law on millions.

But several offensives in both countries whittled down that land, backed by the air power of the coalition.

In March, the SDF ousted the extremist group from its last patch of territory in the eastern Syrian village of Baghouz.

Baghdadi -- an Iraqi native believed to be around 48 years old -- was rarely seen.

After 2014 he disappeared from sight, only surfacing in a video in April with a wiry grey and red beard and an assault rifle at his side, as he encouraged followers to "take revenge" after the group's territorial defeat.

His reappearance was seen as a reassertion of his leadership of a group that -- despite its March defeat -- has spread from the Middle East to Asia and Africa and claimed several deadly attacks in Europe.

But Baghdadi remained on the run, and surviving IS sleeper cells continued to claim deadly attacks in parts of Syria and Iraq.

The US State Department had posted a $25 million reward for information on his whereabouts.

In September, the group released an audio message said to be from Baghdadi praising the operations of IS affiliates in other regions.

It also called on scattered IS fighters to regroup and try to free thousands of their comrades held in jails and camps by the SDF in northeastern Syria.

Idlib is controlled by former Al-Qaeda affiliate HTS, and includes the presence of Al-Qaeda-linked fighters from the Hurras al-Deen group as well as IS cells, according to the Observatory.

"If Baghdadi was indeed in Barisha, it will be interesting to understand how he managed to even get there (through Syria or through Turkey?)," tweeted Michael Horowitz, a Middle East security analyst with the Le Beck consultancy.