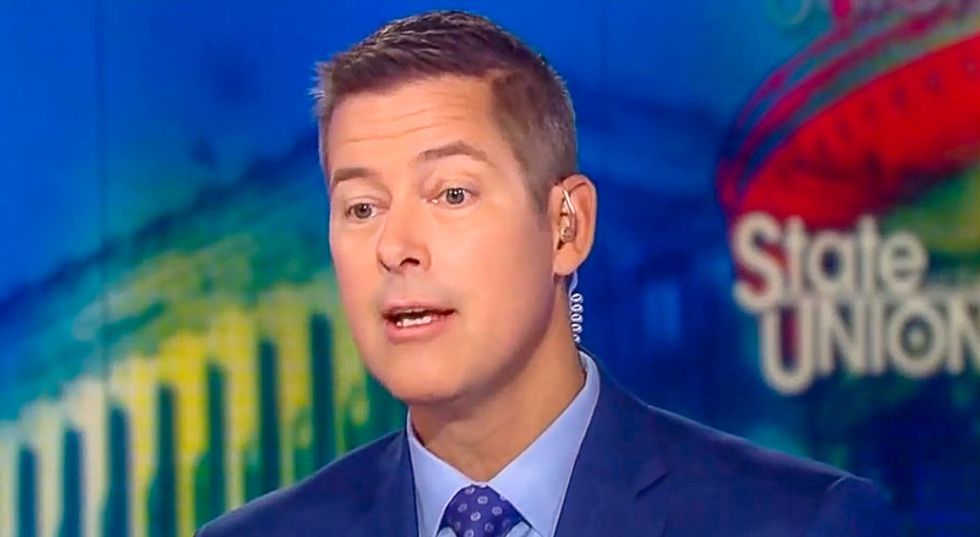 CNN viewers lashed out on Sunday after the network announced it had hired former Wisconsin Congressman Sean Duffy (R), who quit his previous job in Congress to take care of his nine children.

During a Sunday appearance on CNN's State of the Union program, Duffy defended President Donald Trump by repeating a conspiracy theory about a Democratic Party server that he claimed is controlled by Ukrainians.

Read some of the responses to Duffy's first appearance as a CNN contributor.

Wow. I didn’t think CNN could find a more bonkers pro Trump contributor than Rick Santorum but they did with Sean D… https://t.co/kytHZr9xtz
— MickyBell (@MickyBell)1571579326.0

SO HAPPY that @CNN is reaping the benefits of hiring #SeanDuffy Hes now trying to defend and push the #Crowdstrike… https://t.co/eDVsgN1r02
— Global Soul (@Global Soul)1571579450.0

Should we now be thrilled to have an alternate look at the truth with #SeanDuffy now that hes the latest hire by… https://t.co/pgZLHf5S9k
— Global Soul (@Global Soul)1571579582.0

Jake Tapper always has that stupid look on his face after being force feed RW bullshit by the white crusaders @CNN… https://t.co/6WsWOELps8
— The Protagonist (@The Protagonist)1571579610.0

Sean Duffy is the dumbest dullest person to come out of Congress in years. Thank goodness I haven't subscribed to @CNN in almost a decade.
— Luvly1 (@Luvly1)1571581351.0

Maybe @soledadobrien or @rolandsmartin can explain why @CNN would hire a conspiracy theorist such as Sean Duffy as… https://t.co/0yaEdGvWnA
— larryirving (@larryirving)1571583121.0

What the hell is this? CNN has added that moron, Sean Duffy, from the Real World to their team? Like his political… https://t.co/ndVTEvRR66
— L'amant Boulanger (@L'amant Boulanger)1571583361.0

CNN always thinks that if it hires just one lying Trump stooge like Sean Duffy for a show like #CNNSOTU, it can ste… https://t.co/1zKgCayhEX
— Palmer Report (@Palmer Report)1571584094.0