WATCH: CNN displays the Constitution's Emoluments Clause as Trump rambles about it being 'phony' 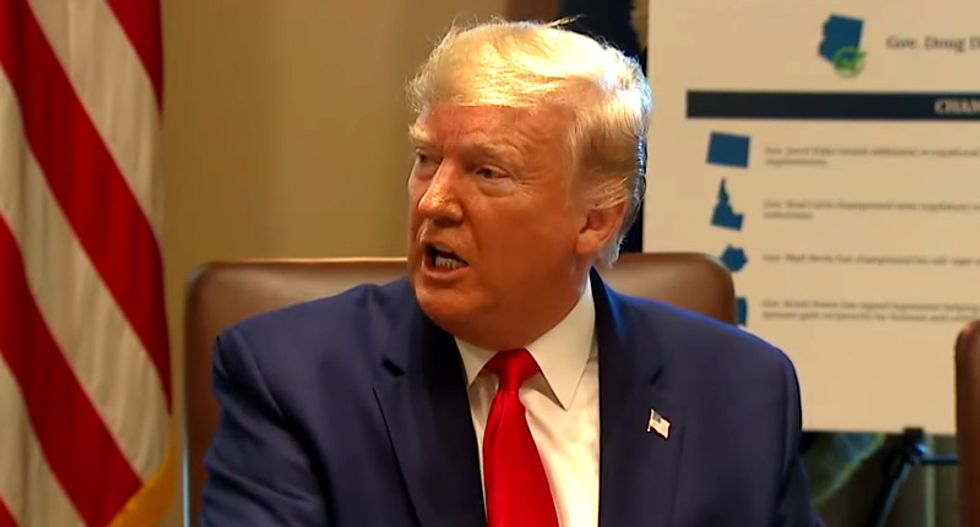 Two days after intense pressure forced President Donald Trump to back down from his plan to host the 2020 G7 summit at his resort in Doral, Florida, the president dismissed the Constitution's anti-corruption clause—which his plan would have violated—as "phony."

"You people, with this phony Emoluments Clause," Trump told reporters at a White House press conference on Monday, responding to allegations that hosting the meeting of foreign leaders at his own property would be a conflict of interest.

Trump claimed that President Barack Obama also violated the Emoluments Clause by signing a book deal and an agreement with Netflix while he was in office—two falsehoods that CNN promptly corrected—and compared himself to President George Washington, who Trump said was also a "businessman" while in office.

Since Trump took office in 2017, ethics watchdogs have decried his refusal to divest from his real estate empire, the Trump Organization, which his two eldest sons are now running. The president maintains access to the company's financial data.

Meanwhile, a number of state and foreign officials have stayed at Trump's properties since he's been in office, which critics say is a clear violation of the Emoluments Clause. The clause bars any president from accepting payments from any state or foreign government.

Citizens for Responsibility and Ethics in Washington (CREW), whose lawsuit against the president over the Emoluments Clause was reopened last month by a federal appeals court, was among the critics of Trump's dismissal of constitutional law.

"The emoluments clauses, which the president just called 'phony,' are of course the original anti-corruption provisions the framers put into the Constitution centuries ago," CREW executive director Noah Bookbinder tweeted.

Trump has also been sued by 200 congressional Democrats and the attorneys general of Maryland and Washington, D.C. over alleged emoluments violations. Both cases are slowly moving through federal appeals courts, but no action has been taken by Democrats yet to stop the president from profiting off his position.

"It would be cool if the courts and/or opposition party proved that the Emoluments Clause is not, in fact, phony," tweeted journalist Talia Lavin on Monday.

On Saturday, after Trump canceled his plan to hold the G7 at Doral, CREW pointed out that his bow to pressure did not cancel out his many other ethical breaches.

"The president's reversal shows that pressure works, that those fighting to hold the line for an ethical government can still sometimes dial down his corruption," said Bookbinder. "The president deserves no plaudits for doing the right thing only after public outcry forced him not to do the wrong thing. This was one corrupt conflict of interest. He's racked up well over 2,000 of them. So we'll keep fighting."