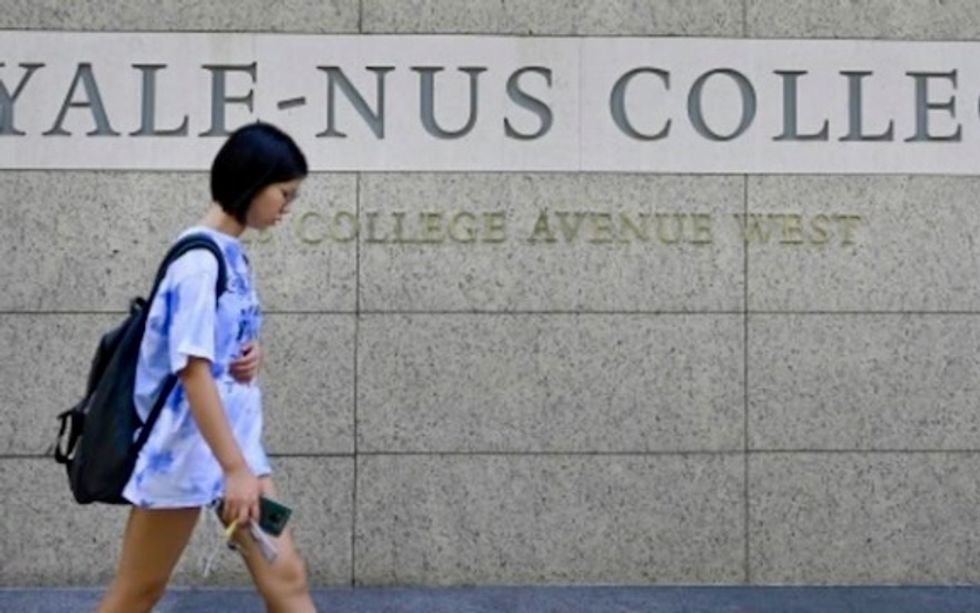 Yale's Singapore college has become embroiled in a row about academic freedom after axing a course on dissent, with the controversy fuelling a wider debate on whether universities are compromising their values to expand abroad.

The Yale-NUS College, a partnership with the National University of Singapore, opened in 2013, drawing criticism from activists and its own faculty over the decision to set up in the city-state, due to its restrictions on civil liberties.

Such fears intensified last month when the liberal arts college axed a week-long course called "Dialogue and Dissent in Singapore" a fortnight before it was scheduled to start, prompting concerns the school was censoring some topics.

The course featured talks by anti-government activists, a visit to Speakers' Corner in a city park -- the only place in Singapore where demonstrations are allowed -- and a documentary about Hong Kong activist Joshua Wong.

Among reasons for the cancellation, Yale-NUS said students could have been at risk of breaking the law, but the row raised fresh questions about whether the Ivy League institution's liberal arts traditions can thrive in Singapore.

Scrapping the course "is precisely why many doubted the Yale-NUS collaboration could be faithful to international standards of academic freedom," Phil Robertson, Asia deputy director for Human Rights Watch, told AFP.

"Such restrictions... handicap the quality of education that students get in Singapore and advances censorship and control that is anathema to innovation and learning."

The group has often criticised Singapore for using draconian laws to stifle dissent and restricting rights to free speech and peaceful assembly.

Yale sought to draw a line under the scandal, ordering a probe that found no evidence academic freedom was violated and said the cancellation was in part due to a lack of academic rigour.

Yale-NUS president Tan Tai Yong said the college remains "fully committed" to academic freedom and insisted it "has a thriving culture of open discussion" -- but added it has to be careful with activities that could cross legal boundaries.

As the controversy escalated, Education Minister Ong Ye Kung said in a speech to parliament that the government supported the cancellation.

"Academic freedom cannot be carte blanch for anyone to misuse an academic institution for political advocacy," he said, warning that the government will intervene "when the situation calls for it".

More broadly, the row focused attention on risks taken by higher-education institutes as they increasingly set up overseas, often in countries with booming economies but where political freedoms may be more limited than in the West.

The number of branch campuses set up by institutions overseas jumped from 84 in 2000 to 249 in 2015, according to data compiled by the Cross-Border Education Research Team, hosted at the State University of New York at Albany and Pennsylvania State University.

"It is always challenging for universities from countries such as the UK, US and Australia to open campuses overseas, particularly in countries with more authoritarian systems," said Kris Olds, an expert in the globalisation of higher education from the University of Wisconsin-Madison.

A number of foreign universities have set up in Singapore, which is aiming to be a regional leader in education.

Yale-NUS is the first college established by the elite US institution outside its campus in New Haven, Connecticut, but it is not a traditional branch campus. It describes itself as an "autonomous college" within NUS.

In its report into the cancellation of last month's course, Yale said it could have led to international students -- nine out of the course's 16 participants -- breaking tough laws against protests.

Only citizens and those holding permanent residency status are allowed to protest at Speakers' Corner.

Course instructor Alfian Sa'at, a prominent Singaporean playwright and political activist, disputed the report's allegations that he had rejected proposed changes to the syllabus and had been reckless to expose foreign students to arrest.

Some were more concerned that the high-profile row could have a chilling effect on academia.

Singapore academics may now be cautious when teaching contentious topics lest they be "accused of subversion, flawed scholarship or activist motivation", said Walter Theseira, a non-elected legislator and professor at Singapore University of Social Sciences.

"This will be bad for our youth, and bad for Singapore," he told parliament.