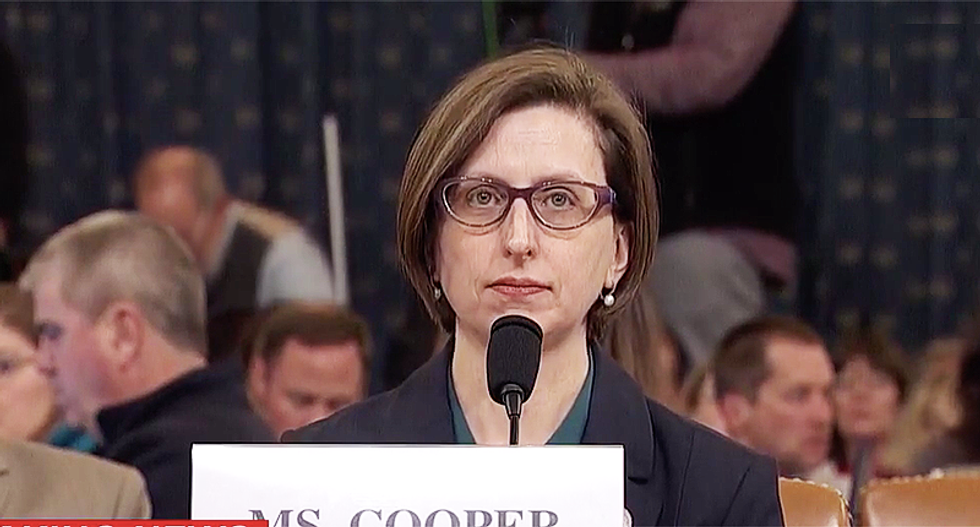 American civil servant Laura Cooper testified Wednesday to facts that take the legs out from under another defense by President Donald Trump and his White House. According to Trump world, Ukraine never knew that aid was being withheld, so there couldn't have been bribery.

According to Cooper, that wasn't the case at all.

As CNN's Manu Raju cited in a Twitter thread, Laura Cooper claimed her staff was asked by an official at the Ukraine embassy "what was going on with the security assistance in July and were aware in August of a hold on aid. Her staff couldn’t find documentation detailing that concern raised in August."

Ukrainians knew “there was some kind of issue” with the aid on July 25, when President Volodymyr Zelensky and Trump spoke, Cooper said. Rep. Adam Schiff (D-CA) noted that Cooper is the first witness to acknowledge awareness of the delay stemmed that far back.

"The Ukraine emails to Cooper’s staff asking about the aid came the same day as Trump’s call with Zelensky - and just hours after the call. The GOP has been arguing Ukraine didn’t know about the hold until several weeks later in a Politico article - and therefore wasn’t pressured," Ranju explained.

The Ukraine emails to Cooper’s staff asking about the aid came the same day as Trump’s call with Zelensky - and jus… https://t.co/MQUgRqJEhB
— Manu Raju (@Manu Raju)1574292650.0

This could knock the legs out of another one of the White House's arguments -- that there couldn't be a quid pro qu… https://t.co/GpE5l2OHw8
— Shannon Pettypiece (@Shannon Pettypiece)1574292330.0