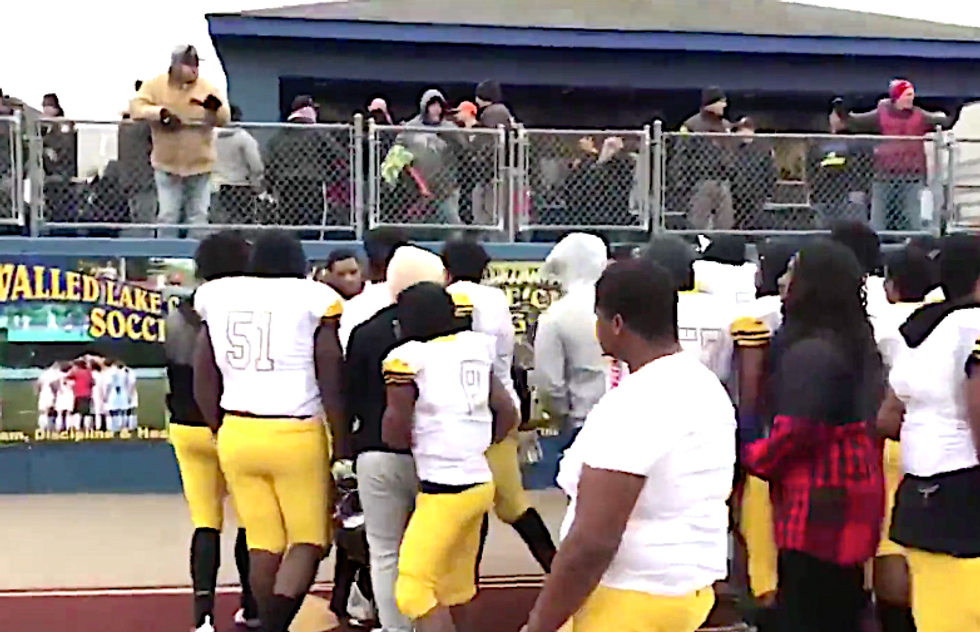 This Saturday in Detroit, some football players from Denby High School, who also happen to be black, were spat upon, pelted with garbage, and taunted with racial slurs throughout the game, and it all started after the players took a knee during the National Anthem before the game, The Detroit Free Press reports.

According to Denby coach Deon Godfrey, some parents from the opposing Almont High School didn't like the fact that the players took a knee.

"Our cameraman is white and was filming near some Almont fans. During the national anthem, he overheard them saying: 'Look at these N-words taking a knee and they don't even know why they're doing it,' and they kept going," Godfey said, adding that Denby’s coaches were called “wiggers” and that "grown men and women started spitting on our kids as they walked up the ramp. They were throwing food, cups, and whatever."

“They called my student trainer a little monkey and they were saying: ‘Who let them off their leashes? They need to be on a leash. They never should have been here in the first place,’” Godfrey continued.

"One of our young men was punched in the face by an Almont parent!" Denby counselor Bob Burg wrote on Facebook. "After we were able to get our kids in a safe area they locked us all in a caged area in the corner of the field, when we just wanted to get the kids safely on our bus.”

In a letter to parents and students, Almont Community Schools Superintendent William Kalmar said that his district plans to investigate the incident "fully."

"We are investigating fully allegations that members of the Almont Raiders Marching Band taunted players from Denby High School while both groups attempted to exit the stadium after the game was called by officials," the letter read. "At this time, we have no evidence of such behavior by members of our marching band, dance team, cheerleaders or student body." He added, “We are cooperating with the authorities in attempting to identify those spectators who may have aggravated the confrontation by taunting Denby players. There is no circumstance in which it is appropriate for an adult spectator to interject themselves into a high school event.”

Watch video of the incident below, via The Detroit Free Press: